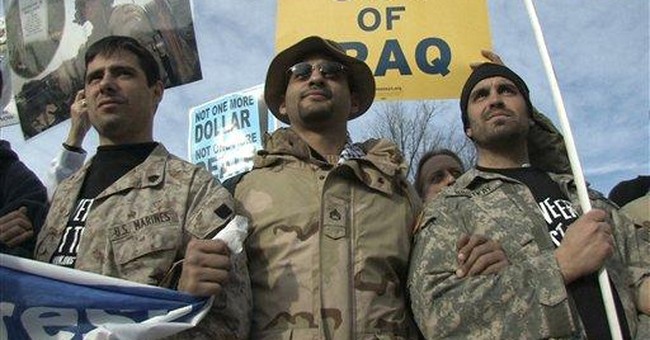 The ideologically decrepit anti-war crowd returned to Washington last weekend for a reunion. The older among them abandoned hundreds of thousands, perhaps millions of Vietnamese to imprisonment, torture, death and re-education camps. Their demonstrations were encouraging to the communist Vietnamese, sending the message that America lacked the will to win. These aging hippies and their progeny now want to do the same to millions of Iraqis, who have democratically elected their leaders.

This is the sunset of the "Age of Aquarius." Yesterday, when they were young, they were the pampered generation that eschewed self-control for self-indulgence. They were (and are) so vain; they probably thought the world was about them. They were the redeeming generation that would save their parents from their sins by ending war, curing racism and cleaning the air and water. Their failure has long been obvious to all but them. To them, intentions, not success, are paramount. Because they believe their intentions are noble, they absolve themselves from the negative consequences of their actions.

As with the Vietnam anti-war protests, several of the same Hollywood actors spoke against the effort to make Iraq a stable and independent nation. Hollywood is the land of make-believe where love means never having to say you're sorry and acting means never having to take responsibility for your words and behavior, which are written and directed by others. These stars live behind gates with security alarms and guards who protect their privileged lives.

Is there anyone else's freedom these celebrities would defend? Do any other lives have value beyond their own? Since none of the older demonstrators took responsibility for what occurred in the aftermath of the Vietnam War, would any like to pledge now that if their protests help embolden the insurgents and Taliban to fight on until Iraq is in their clutches they will accept blame?

Why do these people always oppose America's efforts to defend itself and others? Why did they not protest in Washington, or in Baghdad, when Saddam Hussein was practicing genocide and his sons were raping and torturing their fellow Iraqis? Will we ever see an anti-Taliban protest? How about a demonstration against suicide bombers, or even those who produce and detonate roadside bombs in Iraq? Why do these people think only their country is evil?

This is the doctrine of the privileged and the pampered. It is salvation on the cheap. It makes the protestors feel good, even righteous, but does nothing to solve the problem, which isn't the United States, but a very real enemy that intends to kill us. Unlike Vietnam, the Islamofascists won't leave us alone if we leave Iraq before stability is established. They will send more fanatics to our shores. Watch the TV drama "24" for what could be our prophetic and imminent future with a nuclear device exploding in major cities. Having concluded we don't have the stomach to fight them on their turf, they might understandably deduce we are even less willing to fight them on ours.

While President Bush may have chosen Iraq and Afghanistan to counterattack in this war, the war would have come - and, indeed, had already come prior to the attacks on these two countries - had he decided to do nothing.

"Peace is controversial," said Jesse Jackson last weekend. His comment has about as much relevance in an age of terror as a declaration against lust. Peace doesn't result when America does nothing to confront evil. Peace comes through facing and defeating evil wherever and whenever we can. If freedom is not on the march against tyranny, then tyranny will be on the march against freedom. Neither is static. Peace doesn't "happen." To the extent peace can be attained on earth, it arrives through strength and willpower.

Forty years ago, the protestors pledged to achieve:

No more falsehoods or derisions

And the mind's true liberation

They liberated neither their minds, nor the world. The Vietnamese who were murdered were not liberated. Today's terrorists will not be defeated if we embrace the inane doctrines of the protestors.

A better song for them might be Brenda Lee's "I'm Sorry," the first part of which goes:

That I was such a fool"

The Day of Reckoning For Woke CEO’s is at Hand.
Townhall
Glenn Greenwald calls out the 'DNC disinformation agents' in the media who pushed the Alfa Bank hoax
Twitchy
'There Will Be Blood': Elon Is Preparing for Battle With 'Hardcore' Lawyers
Redstate
Nancy Pelosi Gives Us Her Solution to White Supremacy
PJ Media