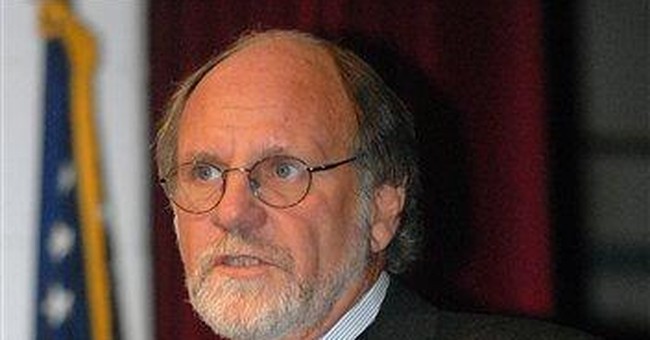 There has never been a more succinct statement about the obligation and privilege the nation has to care for its military veterans than that brief clause in Abraham Lincoln's Second Inaugural Address. But the New Jersey legislature thinks setting aside a day on which to remember those who have bought our freedom with their blood is not as important as it used to be.

New Jersey legislators have unanimously passed a measure that includes a provision to remove the state mandate to teach about Veterans Day in the public schools. And not only Veterans Day; the bill would also remove requirements to teach about Columbus on Columbus Day, the Pilgrims around Thanksgiving Day, and even Commodore John Barry Day, which commemorates the Revolutionary War hero for whom a bridge is named, which spans the Delaware River to connect Bridgeport, N.J., to Chester, Pa.

It is the possible repeal of the law to teach about veterans on Veterans Day that has upset a lot of people, including, understandably, veterans. There are few enough who serve in today's all-volunteer military and a decreasing number of citizens who have relatives in the military, or know anyone in service. That makes it much more important for students to learn of the contributions made by veterans to secure the freedoms too many of us take for granted. Those freedoms mark the difference between American schools and those in dictatorial societies that are forced to teach state propaganda.

The ban on teaching about such holidays is included in a larger bill that passed the legislature last month. It is designed to help control New Jersey's spiraling property taxes. Gov. Jon Corzine has not indicated whether he'll sign it. He'd better not if he knows what's good for his Democratic Party. Have Democrats forgotten the 1988 campaign during which Republicans hammered presidential candidate Michael Dukakis for vetoing a bill while he was governor of Massachusetts that would have required all public school students in the state to recite the Pledge of Allegiance? Sure, it was wrong to question Dukakis' patriotism, but it worked politically for Republicans, who pounded him with the issue, along with the line about his being a "card-carrying member of the ACLU."

Since 1967, New Jersey schools have been told to observe Veterans Day and related holidays to promote "the development of a higher spirit of patriotism." Under the "law" of political correctness, apparently anything that promotes love of country, or God, or the military is now to be avoided. Thank Jupiter (it used to be "thank God," but He's been out for some time), public schools can still distribute condoms. Maybe a way around the law would be for veterans to teach sex education.

Hank Adams, a New Jersey Veterans of Foreign Wars adjutant and a veteran of the Army and Coast Guard, said of the proposed law, "It's not right. (Students) are not going to know the sacrifices that were made so they can enjoy the protections that they have." Other veterans groups are petitioning Gov. Corzine not to sign the bill. But after campaigning on a pledge not to raise taxes and then reversing himself shortly after taking office, Corzine has already proved how out of touch he can be with average voters.

While New Jersey residents are steamed about their high taxes, they may get even angrier about the message this proposed law sends to veterans and how little governing officials appreciate their sacrifices.

John Adler, New Jersey state senator, who is a co-sponsor of the anti-Veterans Day measure, said, "I don't think the state should be in the business of telling districts to do every single thing." Oh really? As most parents of public school students everywhere know, the state has been imposing its will on schools, students and parents for quite a few years. That New Jersey is close to not doing so when it comes to patriotism and veterans communicates one message to those who have put their lives and limbs on the line for the rest of us: "drop dead."