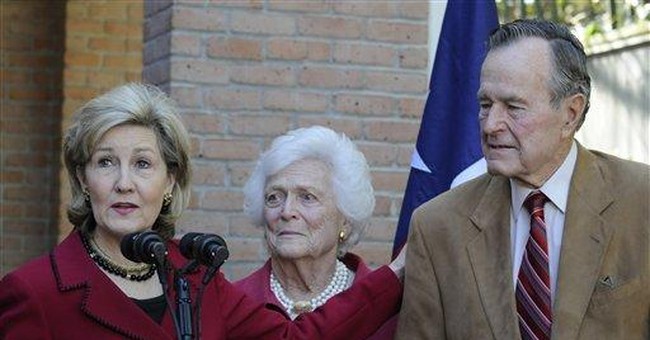 In early March 1991, all the smart people in politics knew one thing about the upcoming 1992 campaign: President George H.W. Bush was unbeatable.

Fresh from victory in the Gulf War, Bush enjoyed a job-approval rating around 90 percent. At a time when potential challengers should be enlisting supporters and planning campaigns, Democrats who had been expected to challenge Bush held back, hesitant to enter a race that seemed hopeless. "Will anybody run against George Bush in 1992?" asked Juan Williams in the Washington Post on March 10, 1991. "There are no candidate footprints in the pristine snows of New Hampshire this winter, and the Iowa cornfields are untrampled."

March passed, and then April, May, June and July, and still Democrats searched for candidates willing to challenge Bush. One by one, the big names -- Al Gore, Dick Gephardt, Mario Cuomo -- decided not to run. Bush was just too strong.

The Democratic field that finally emerged seemed decidedly lackluster: Jerry Brown, Paul Tsongas, Bob Kerrey, Bill Clinton, Douglas Wilder and Tom Harkin. After an undistinguished primary season, one of them would be the sacrificial lamb to run against Bush.

Today, 20 years later, there's no need to elaborate on how it turned out. All you have to say is that the prize went to the candidate who took a risk when others shied away.

Now we're in a political season in which it is Republicans who seem hesitant to challenge an incumbent president. And we're seeing the emergence of a new conventional wisdom: Barack Obama will be very tough to beat.

Back in the first Bush administration, some GOP strategists surveyed the struggling Democratic field and repeated the old axiom: "You can't beat somebody with nobody." Who could possibly have the stature to knock off President George H.W. Bush? Now, some of those same Republicans are fretting about the quality of their own presidential field and repeating the same slogan, this time not in overconfidence but in self-reproach. Maybe they've forgotten 1991.

None of this is to say that conditions today are the same as they were 20 years ago. There are a zillion differences. Bush was riding what turned out to be a fleeting wave of popularity after the war in 1991, while Obama will likely have more durable support in 2012. Also, the economy was trending downward in 1991 but will (hopefully) be headed up in 2012. It's unlikely next year's race will feature an independent who wins a substantial share of the vote, as Ross Perot did back then. And much of the press was against the incumbent president in 1991, but will most assuredly be for the incumbent president in 2012.

But whatever the differences, the similarity is that for Republicans, victory is possible for a candidate with daring, confidence and skill. Yet some of the most qualified potential GOP candidates appear to be hanging back, reluctant to take on the White House. Indiana Gov. Mitch Daniels is surely one of the more capable potential presidents out there, but he has vacillated on the question of running and at the moment seems to be leaning against it. New Jersey Gov. Chris Christie has flatly declared himself unready for the job. Other Republicans with proven appeal, like former Arkansas governor and 2008 candidate Mike Huckabee, are biding their time.

But time is passing. The first Republican presidential debate is less than two months away, and by now candidates should have already spent months organizing and seeking support in early primary and caucus states. Those who haven't been doing that are already behind.

Yes, Obama will be difficult to beat. He has the enormous power of incumbency, and he can lose a number of the states he won in 2008 and still be re-elected. But George H.W. Bush seemed unbeatable, too. In 1991, Clinton decided to go forward, in the face of all the conventional wisdom, and ended up in the White House. No one knows whether a Republican challenger could do the same thing now. But we know this for sure: They won't win if they don't run.