A GOP Unknown in Striking Distance of Barney Frank 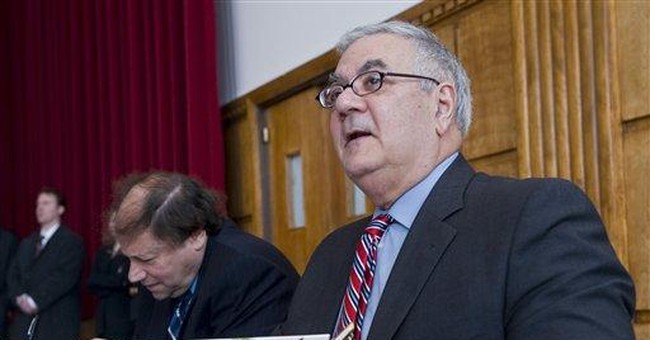 Sean Bielat, the Republican candidate for Congress in Massachusetts' 4th District, has had just one conversation with his Democratic opponent, Rep. Barney Frank.

It was in August, at a parade in New Bedford. "I went up to introduce myself and said, 'Nice to meet you,'" Bielat recalls. "He said, 'I wish I could say the same, but you've made this personal. You've been attacking me.' Then he turned and walked away."

Bielat remembers thinking that was a little odd, since at that very moment, Frank's website featured plenty of attacks on Bielat. But the brief encounter set the tone for what has become an increasingly contentious campaign. The nervousness plaguing Democrats nationwide has touched even Frank, a 14-term incumbent who hasn't faced a serious challenger in years.

Bielat is 35 years old, a Marine who spent four years on active duty and is now a major in the Reserve. He's a graduate of Georgetown University with a master's from Harvard and an MBA from Wharton. He has devoted a good portion of his professional life to manufacturing the high-tech robots that defuse improvised explosive devices in Iraq and Afghanistan. In other words, he's a serious man.

In the spring and summer of 2009, Bielat watched in dismay as Barack Obama and Democrats in Congress pursued one big-government initiative after another. He began to think about running but didn't make a final decision until Jan. 19, when a certain Republican won election to the Senate from Massachusetts -- and did it by winning in Frank's district. "When Scott Brown won the 4th Congressional District, it became clear that not only could a Republican win here," says Bielat, "but there was a case to be made nationally to donors and supporters that this is winnable."

National support is key, Bielat believes, given that his opponent is chairman of one of the most powerful committees on Capitol Hill and can raise virtually all the money he wants. But Frank is also one of those liberal Democrats whom conservative Republicans love to hate. If GOP donors across the country think there's a chance to beat him, they'll start giving. So far, support has been steady but not overwhelming. Bielat has raised about $600,000; Frank has pulled in many times that.

Bielat is a relative newcomer to the 4th District. He grew up around Rochester, N.Y., and in addition to his military service has worked or gone to school in Chicago, Washington, D.C., and Philadelphia before settling in the district in 2007. Given that, it's not a surprise that a poll taken by his campaign in mid-September found that 43 percent of voters have never heard of Bielat. Everyone -- literally everyone -- knows Frank.

But Bielat is still heartened by the poll's main finding, which shows him trailing Frank by just 10 points. Frank's supporters say the lead is bigger, but Bielat believes he's within striking distance.

Ask Bielat to name the three worst things Frank has done in office and you get an idea of what his focus would be, if elected. "You've got to start with Freddie and Fannie and his unending push to expand homeownership," Bielat says. "He definitely played an enormous role in getting us where we are today in terms of the real-estate bubble and the ensuing financial collapse."

No. 2? "Financial reform, because it doesn't address Fannie and Freddie and vastly expands oversight of the financial-services sector."

Three? "His view on what government should and should not do." Simply put, Frank wants an always expanding federal government, and Bielat doesn't.

Bielat is particularly concerned about runaway entitlement spending, which is something few Republicans other than Rep. Paul Ryan are willing to take on. (Bielat is a big Ryan fan.) When asked about his party's new Pledge to America, Bielat sounds less than dazzled. "I think it's fine, but I'm not running on it," he says. "I wish it had addressed entitlement reform."

You have to classify a Bielat victory as unlikely. Frank usually wins re-election with between 65 percent and 75 percent of the vote -- and that's when Republicans even bother to field a candidate against him. That's a strong record.

Still, this is no usual year. The fact that Bill Clinton -- the Democratic Party's biggest gun -- recently came by to campaign for Frank suggests that party leaders don't believe Frank is a shoo-in. Republicans across the country should take notice, Bielat says: "This is one worth watching."