What McCain Should Have Said 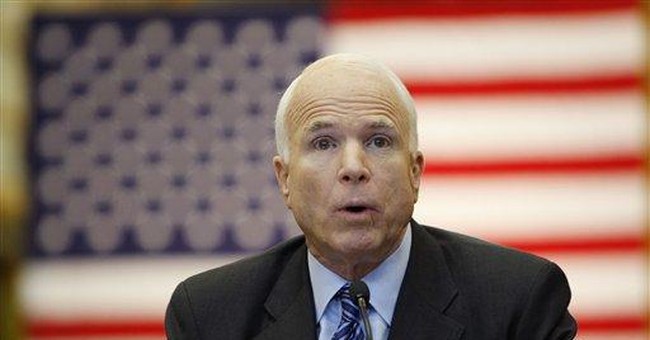 I didn’t think McCain did badly in the first debate, but I thought he could have done better. For instance, the idea that Obama or any Democrat could be trusted to handle the economy is laughable. When I think about liberals being in charge of America’s wallet, drunken sailors on a binge is the image that comes to mind.

A recent list of the ten U.S. cities with the highest poverty rates shows that these major municipalities have one thing in common. And just what is that one thing that connects them? It’s Democratic leadership, my friends. Cleveland hasn’t had a Republican mayor since 1989, Cincinnati hasn’t had one since 1984, Detroit since 1961, Buffalo since ’54, Philadelphia since ’52 and St. Louis since ‘49. It’s been over a hundred years for Newark and Milwaukee. Miami and El Paso have never elected a Republican mayor. Is it merely an odd coincidence? I don’t think so.

But it’s when Obama tried to blame the current financial crisis on George Bush and the GOP that McCain should have held his feet to the fire. For one thing, it’s the liberals in Congress who forced the banks and mortgage lenders to put prudence and commonsense aside in favor of political pandering by extending home loans to people who never should have received them, not because of race, but because they were bad credit risks. People like Kerry, Pelosi, Reid, Schumer, Boxer, Barney Frank and Barack Obama, wouldn’t in a million years lend any of those people ten bucks, but they saddled the rest of us with billions in bad loans.

This isn’t to suggest that the lenders were entirely blameless or greedless, but they never would have made sub-prime loans in the first place if the federal government hadn’t forced them to do it. The fact is, when it comes to strong-arm tactics, liberals don’t take a backseat to anyone, including Al Capone and Lucky Luciano.

The other thing that McCain could have brought up is the fact that two of the people who helped get Fannie Mae into its present pickle are a couple of ne’er-do-wells with close ties to Obama; namely, former Fannie Mae CEOs Franklin Delano Raines and James Johnson. Raines has been accused of pocketing over $14 million in bonuses based on fraudulent accounting practices, while Johnson, who was initially named to head up Obama’s V.P. search committee, was forced to step down when it was discovered that he had accepted a tasty little conflict-of-interest home loan from Countrywide, a loan which in less polite circles would be called a bribe.

If I were McCain, I would also have pointed out how similar Johnson’s home loan was to the one the Obamas received through the kindness of convicted Chicago fixer Tony Rezko.

If I had been Sen. McCain, I would have taken the opportunity to remind everyone that Obama, the man who would be commander-in-chief, pooh-poohed Iran as a small country that posed no real danger. It’s one thing, after all, for the MSM to treat Sen. Obama as if he were treated with Teflon and quite another for his opponent to do the same.

Still, I would have closed on a positive note. I would have praised Barack Obama for not suggesting, as Joe Biden did, that George Bush should have dealt with the current financial crisis by going on TV as FDR had in order to reassure the country during the bad days of the Great Depression.

What is it with these guys? Obama told us there were 57 states and that Kennedy ended the Cuban missile crisis by sitting down across the table from Khrushchev, and Biden is convinced we all had TV sets in the 1930s. All I can say is that it’s a good thing that these two shmoes can make a living in politics because they sure couldn’t cut it as junior high civics teachers.