Pacifism: The Last Refuge of Hypocrites 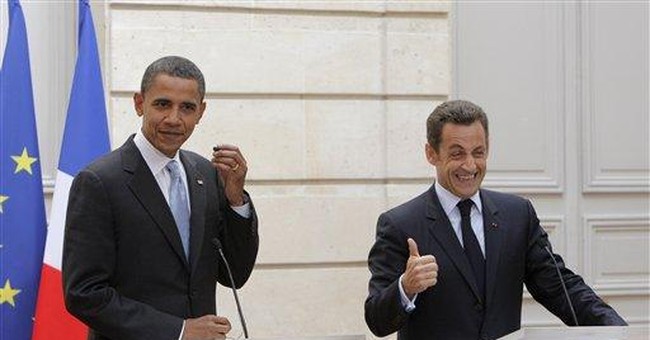 It amazes me that Barack Obama continues to score points for having opposed the war in Iraq. But, considering how much the left-wing media adores this guy -- and let us never forget that Obama has managed to send shivers up Chris Matthews’ leg -- I suppose nothing should surprise me. I mean, Sen. Obama is a man who’s been around for nearly 47 years and apparently every single person who is near and dear to him is a creep I would cross the street to avoid. Also, isn’t it high time that people quit oohing and ahing about his oratorical skills? I’m willing to grant that so long as he is reading the work of his speech writers, he’s okay. But ask him a question off the cuff and he turns into Mortimer Snerd. Still, I suppose if I were desperately trying to pass myself off as a centralist when I was really a left-wing radical, I’d get nervous, too.

Much has been made of Sen. Obama’s reluctance to meet with General Petraeus and his refusal to travel to Iraq with or without Sen.McCain, but I, personally, don’t blame him. After all, what could he possibly say afterwards when all the evidence suggests that, thanks to the surge, things are turning out just swell over there? It’s one thing to pat oneself on the back for being the most prescient member of the Illinois legislature and quite another to admit to having been a nincompoop. I know I sure wouldn’t want to go into a general election as the candidate who’s still insisting on a deadline for troop withdrawal, thus ensuring that we and the Iraqi people would suffer the same sort of ignominious defeat that we and the South Vietnamese endured 35 years ago.

The left makes no secret of the fact that they hate war. But the truth of the matter is that their opposition to armed conflict is situational. It depends entirely on the party affiliation of the commander in chief and, of course, on the politics of the enemy. For example, the left was eager for the U.S. to enter the Spanish Civil War in order to fight Franco and his fascist allies because the Soviet Union and the Communists were lined up on the other side. However, as soon as Hitler and Stalin signed a mutual non-aggression pact, the American left decided we had no business getting involved in European affairs, even as Poland, France and Holland, were being swallowed up by the Nazis. Of course that changed just as soon as Germany invaded the Soviet Union. As that icon of the left, Lillian Hellman, was reputed to have announced to a group of fellow Communists on that fateful day, “We’ve been attacked!”

During the Cold War, these were the same people, as devoted as ever to serving the interests of Joseph Stalin, who insisted that America unilaterally disarm itself and turn its atomic arsenal into plowshares.

When Bill Clinton sent U.S. troops into Kosovo, a place where no American interests were involved, the left raised no objections. And heaven knows that the MSM never embarrassed him by calling attention to the fact that although he promised that the troops would all be home within 12 months, they were still there when he left office. I suppose he was so busy granting last minute presidential pardons to his campaign contributors that it simply slipped his mind.

And isn’t it odd that nobody, including the New York Times, John Murtha or Barack Obama, ever asked Bill Clinton if he actually had an exit strategy?

These days, it must be apparent even to the goofiest liberal that victory in Iraq has been snatched from the jaws of defeat by the U.S. military. Aside from the obvious reason why it gladdens the hearts of most decent Americans, that would be wonderful news if only because it meant that Cindy Sheehan had once and for all been condemned to that shadowy world inhabited by the likes of Amy Fisher, Heidi Fleish and Lorena Bobbitt, and gone from being front page copy to simply being old-what’s-her-name.