John Edwards: A man for no seasons 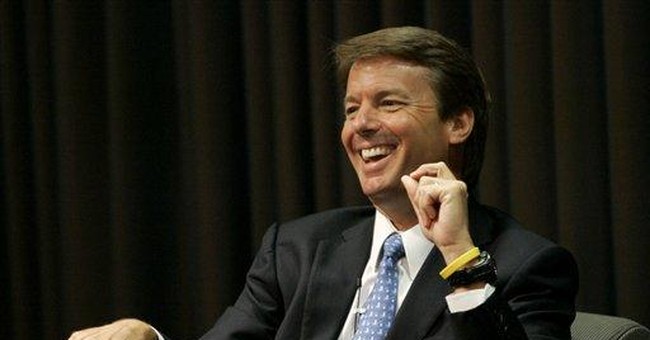 Recently, a friend wondered if John Edwards might not be the biggest hypocrite in our nation’s political history. I was taken aback. With so many Democrats vying for the honor, is it possible that the poster boy for the Hair Stylists of America, a man who’s held office for a scant six years, could beat out a bunch of seasoned veterans who’ve been in the public eye for several decades? If so, it could be the biggest upset since Truman bested Dewey back in 1948.

For those questioning why I immediately dismissed Republicans from the competition, it’s because when it comes to hypocrisy, they’re simply not in the same league as liberals. How many wealthy right-wingers, after all, make it a regular practice to insist that taxes be raised? But left-wing kazillionaires like Ted Kennedy and Nancy Pelosi, who employ high-priced CPAs to keep their own tax bite to a bare minimum, are always demanding that the rest of us pay through the nose.

But let us return to the matter at hand. There’s no question that Mr. Edwards, an ex-lawyer who made his pile chasing ambulances with the fervor of a greyhound pursuing a mechanical rabbit, is certainly in the running. For instance, not too long ago, he told the International Association of Machinists and Aerospace Workers that weapons and equipment used by America’s military should be made in the good old U.S.A. It got him a standing ovation. What he failed to mention, of course, is that, being a liberal, he is opposed to actually using any of that weaponry against our Islamic enemies.

He also told the labor union that he was against Americans driving gas-guzzling SUVs. This was just before he drove off in his own SUV. It kind of reminded me of 2004, when John Kerry, John Edwards’ running mate and mentor, was caught in a similar situation, and explained that he didn’t own the offensive vehicle, his family did.

Edwards, who carries on as if most of us would be better off living in Bangladesh, makes do in a 28,000 square foot house, which comes complete with basketball and squash courts. At the same time that he’s heating and cooling that monstrosity, he talks as if he’s as environmentally concerned as Ed Begley, Jr., on one of his more tedious days. At least when Marie Antoinette was noshing on her Napoleons, she didn’t begrudge the peasants their little piece of cake.

But if we’re honest, we have to admit that none of this is quite enough to separate Edwards from the competition. But then, like a two-legged version of the legendary race horse Silky Sullivan, he pulls away on the far turn and hits the wire a nose ahead of Gore, Reid, Biden, Byrd and Murtha. And of all places, he does it in Iowa. It was there that the man who crusades like a skinny Michael Moore on behalf of universal health coverage was asked if he’d like America to have the same program as Cuba. He first said he wasn’t sure. But then, like a student who’d been told once too often that there are no stupid questions, he asked if Cuba’s program was government-controlled. And this is the fellow who insists that Hillary and Obama are out of touch.

Ask Edwards about haircuts, and he’s a walking encyclopedia. Ask him who runs things in a Communist dictatorship, and he’s stumped.

So, should you ever find yourself on “Jeopardy!” with the category being Hypocrisy, and Alex Trebek says, “John Edwards,” be sure to buzz in with “Who’s the biggest, dumbest hypocrite in American politics?”