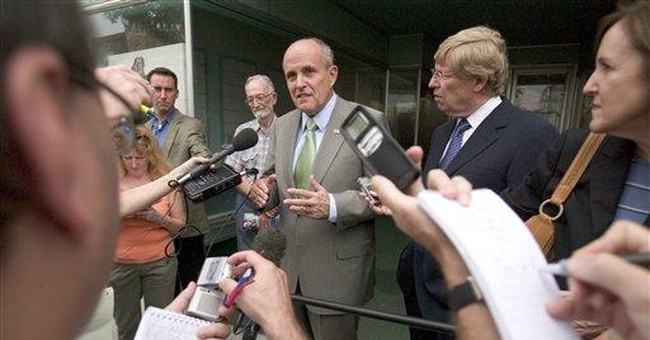 Nothing that I’ve written recently has stirred up the hornets quite as much as a piece in which I declared my support for Rudy Giuliani. I can’t say I was too shocked. After all, aside from religion and, in certain strange circles, TV soap operas, there’s little that Americans feel more passionately about than partisan politics.

Frankly, the only thing about the response that surprised me was that I was mainly raked over the coals by Ron Paul’s disciples. I barely heard from Fred Thompson’s fans and not at all from Mitt Romney’s supporters. Make of that what you will.

The truth of the matter is that, aside from his coming across as the world’s biggest sourpuss, I really have nothing against Mr. Paul, except for the fact that he’d have no chance of defeating Sen. Clinton in 2008. The best he could do is be a third party spoiler in the tradition of Ross Perot and Ralph Nader, thus ensuring that Hillary would get to move back into the White House and once again train all the mirrors to assure her that she’s the fairest of them all.

When I stated my preference for Mr. Giuliani, I mentioned that I liked the way he spoke, I appreciated his forthright approach to Islamic fanaticism and his vow to appoint strict constructionists to the Supreme Court. What I neglected to point out is that he is a high profile personality who, unlike Ron Paul, might be able to raise the obscene amount of money required to run a successful presidential campaign. What’s more, unlike the other Republican hopefuls, he might actually be able to carry such Democratic strongholds as New York and New Jersey.

Ron Paul’s fans wanted to assure me that they would never lower themselves to vote for a social liberal like Giuliani. I found it odd that many of them didn’t seem to mind in the least lowering themselves to the gutter when sharing their opinion of Rudy and me. In fact, after I shared some of their more colorful comments with my wife, she said, “They make it sound like Giuliani is running an abortion clinic, and that you’re his nurse.”

What I should make clear is that when it comes to politicians -- even those I support -- I do not regard them as heroic figures. That sort of respect I reserve for firemen, cops and members of the military. The way I view our elected representatives is with an extremely jaundiced eye. I often find myself thinking that if only there were a way to turn all the stupidity, cowardice and hypocrisy, in Washington, D.C., into electrical power, Byrd, Biden, Boxer, Kennedy and Kerry, alone, could light up the eastern seaboard.

All I expect from a politician is that he and I see eye to eye on a few major issues, and that he or she can defeat the various Socialists, Communists and liberal pinheads, with a (D) after their name.

So, while I’m aware that Giuliani’s personal life hasn’t always been the model of probity and decorum, it doesn’t matter as much to me as it does to some others. The president isn’t my spiritual leader, and I’m not looking to marry him.

I think Al Capp pretty much summed up my attitude towards politicians years ago in “Li’l Abner.” A senator in the comic strip was facing certain defeat in an upcoming election until he thought to remind his constituents that if he won, he’d be going back to Washington and they wouldn’t see him for another six years, but if he lost, he’d be moving home to Dogpatch. The threat worked, and he won in a landslide.

Where politics and politicians are concerned, I believe that cynicism should always be the order of the day. Politics is the world of the possible, not the best possible world.

The way I see it, whoever runs against Hillary Clinton deserves to win. So far as I’m concerned, those Republicans who threaten to stay home on election day in 2008 if their personal favorite isn’t the nominee, just so they can self-righteously claim they didn’t violate their principles, are beneath contempt. Cutting off your nose to spite America is not commendable. It’s my conviction that anyone who permits this country to be saddled with a left-wing Medusa surrenders all claims of moral superiority.

In short, I am not one of those people who would care to have engraved on his tombstone: Here Lies Burt Prelutsky Who Never Voted for the Lesser of Two Evils.