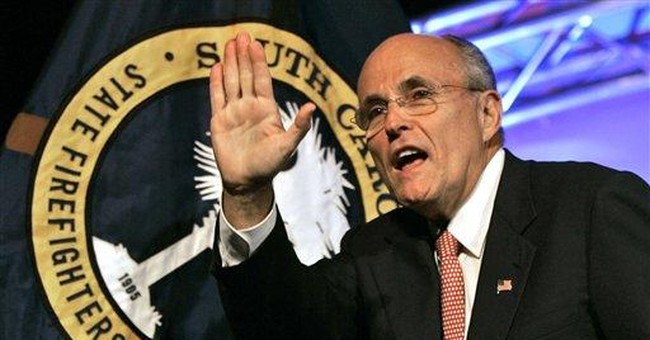 Because I’m convinced that, come November of 2008, Hillary Clinton will be the presidential candidate of the Socialist party, I think it’s particularly important that the Republicans nominate Rudy Giuliani. I will admit that I have been waiting to see if Fred Thompson was going to toss his hat in the ring, but I finally got sick and tired of waiting. The guy’s about 6-foot-5 and probably weighs 280; which doesn’t hurt when he’s portraying a New York City D.A., but he’s simply not cut out to play a coquette.

There are other attractive candidates in the GOP, but I happen to believe that Rudy has the best chance of defeating Clinton in a general election. I realize that for some conservatives, he might be a bit hard to swallow. I realize that he was in favor of abortions before he was against them and that he was anti-guns before he was for them, and that while he was mayor, New York was a so-called sanctuary city. But it bears keeping in mind that if you plan to win an election in New York City, it behooves you to be liberal when it comes to social issues. At least, unlike Mayor Michael Bloomberg, who gives opportunism a bad name, Rudy didn’t switch from Democrat to Republican to Independent. I woke up rather late this morning, so I’m not certain what Bloomberg is today. Perhaps a Whig.

There are many things I like about Giuliani. For one thing, I like the way he sounds. After all these years of listening to Bush, I find myself longing for a president who doesn’t sound like he has a mouth filled with mush, a president who doesn’t require a translator to explain an hour after a press conference what he really meant to say.

After 9/11, I liked it when Giuliani told Saudi Prince Alwaleed bin Talal where to stick his $10 million check. And when my wife and I visited New York City some years ago, I appreciated the fact that Giuliani had managed to transform what had been a pig sty into a crown jewel, a major city that was as clean and safe and friendly as any in the world.

What I like best about Giuliani is that I believe he agrees with me that Islamic terrorism is the single greatest threat not only to America, but to western civilization, in the world today. I think he’s the kind of guy who doesn’t back down, and who can rally Americans to do whatever it takes to stay the course and defeat an enemy that should have been exterminated during the Dark Ages, along with the plague-bearing rats.

I know that many of my fellow conservatives will have a hard time giving their hearts and their votes to a man who isn’t far enough to the right to suit them, even though he said that, if elected, he would appoint strict constructionists to the Supreme Court. When I first heard that, I sent an e-mail to a person with a prominent role in his campaign hierarchy, suggesting that American voters are accustomed to candidates forgetting their promises once they’re in the White House.

My suggestion was that, in order to prove his sincerity, Giuliani should put it in writing. I never heard back, but a while later, that’s exactly what he did. Inasmuch as the greatest legacy Bush will leave us is the Roberts Court, it seems to me that if Rudy keeps this one promise, it’s reason enough for conservatives to troop out and vote for the man. What right-wingers should keep uppermost in mind is that whether the issue is abortions or guns, eminent domain or racial quotas, it’s not the president who makes the call, it’s five people in black robes.

As for those who are overly concerned that Rudy hasn’t always been on the right side, the far right side, all I can say, as someone who voted for Democrats for far too many years, is that it’s a lot more important where a person ends up than where he started out.

Finally, I like Rudy Giuliani because in a city that takes its baseball seriously, and in which even Mets fans get to vote, he never made a secret of the fact that his heart belonged to the Yankees.

I realize that when Hillary, the carpetbagger from Arkansas, decided to run for the Senate, she also claimed to be a Yankee fan. The difference is that Rudy actually attends games, whereas Mrs. Clinton thought that Lou Gehrig and Babe Ruth were still wearing pinstripes.