Where's John Wayne When You Really Need Him? 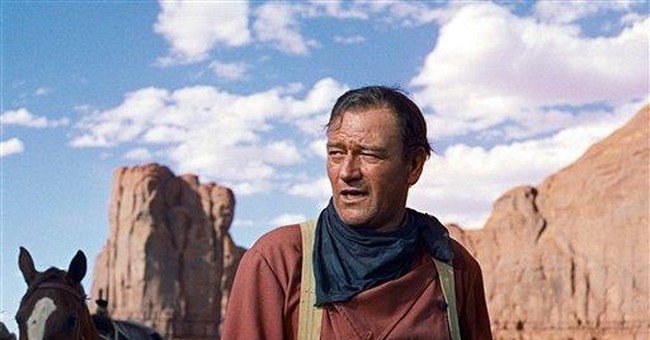 If he were alive today, John Wayne would have just celebrated his hundredth birthday. Actually, if he hadn’t made the worst movie of his career, “The Conqueror,” he might well have made it to the century mark. In that movie, Wayne appeared as Genghis Khan, joining the likes of Katharine Hepburn, Paul Muni, Mickey Rooney, Louise Rainer, Agnes Moorehead, Walter Huston and Alec Guinness, on the list of movie greats who should have had second thoughts before agreeing to portray Asians.

In case you’re wondering how that dreadful 1956 movie shortened the Duke’s life, it was shot downwind from where our government had been conducting A-bomb tests. Among the movie’s cast and crew, it’s believed that 91 people, including Wayne, director Dick Powell, and co-stars Susan Hayward and Pedro Armendariz, developed radiation-induced cancer.

Although John Wayne was nominated for an Oscar for “Sands of Iwo Jima” and took one home for “True Grit,” his acting ability was generally dismissed by the hoity toity critics. Typically, they complained that he was merely playing himself. Having been a movie critic in those days, it used to drive me nuts when my colleagues made such inane comments. I would point out that Wayne had been a college graduate back in the days when that actually meant something. His real name was Marion Morrison, his father had been a pharmacist, and, for the better part of 40 years, Wayne had been an actor. In other words, he had never been a cowboy, a cop, a Marine sergeant, a sea captain, a professional boxer or an airline pilot -- all of them roles which he had convincingly portrayed on screen. He never once played himself -- a hugely successful movie star.

When Wayne wasn’t being excoriated by the critics, he was being attacked by liberal airheads. Because the Duke was a plain-spoken patriot, the left-wing press labeled him a fascist, a warmonger and a bigot. Some bigot -- he had married three Hispanic women and had seven half-Hispanic children!

They called him a know-nothing ignoramus in spite of the fact that he ran his own motion picture company, was extremely well-read, and played a first-rate game of chess. On top of all that, he was legendary for being loyal to his fellow actors and the crews with whom he worked, and, so far as I know, he never once showed up on a set unprepared or threw a temper tantrum to prove how important he was. It’s also worth noting that he wasn’t called the Duke because he regarded himself as royalty, but because, as a kid, he’d had a dog named Duke, and Wayne had wound up with it as a nickname.

Sometimes, though, all it takes is a news item to get me wishing that Wayne was still in his prime, still making movies, and that somewhere down the line I’d get to see the big lug taking certain matters into his own capable hands.

Recently, the item that grabbed my attention was a public opinion poll that reported that 25% of young American Muslims see nothing wrong with suicide bombers in “certain circumstances.” Presumably, those would be circumstances in which only Christians and Jews were the victims. This is the same crowd that’s always complaining that they’re the victims of racial profiling.

So, do you really blame me for wishing that I could look forward to going to the local Bijou in the near future and see the Duke mopping up a bunch of these whiny punks in a movie that might be called, “Allah, Be Damned”?