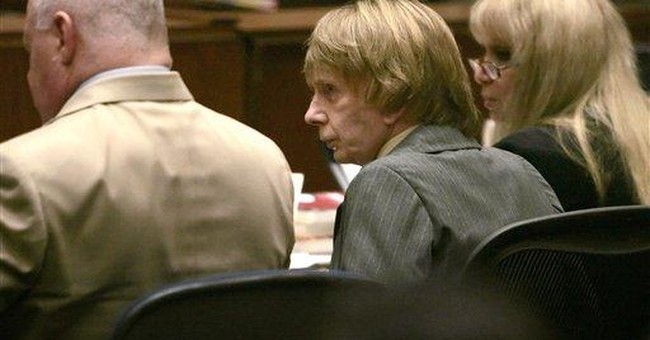 Recently, shut-ins, hospital patients and daytime TV addicts, have been treated to a whole lot of me. Perhaps “treated” isn’t the word that some of you would have come up with, but it’s my word and I’m sticking with it.

It all began with an e-mail from Ilana Rosenbluth, who works for CourtTV. Having discovered that I attended John Burroughs Junior High and Fairfax High School with Phil Spector, she wanted to know if I’d appear on the Nancy Grace Show, and share my experiences. Carefully, I weighed the invitation. On the one hand, I might have a chance to promote my book on national TV; on the other hand, I’d have to wake up early and get downtown to the courthouse during the morning rush hour. However, once Ms. Rosenbluth explained that they’d send a car, I readily agreed. The fact is, so long as people send a car, there are very few places I won’t go.

What I didn’t realize until I showed up at the courthouse was that they conduct the interviews in the parking lot, about 10 yards from a very busy street. So, one, it was very cold and windy; two, it was really noisy, what with all the traffic going by. Worst of all, though, they didn’t even show my book, let alone mention it.

On camera, I told Ms. Grace, who was warm and toasty back in her New York studio, that young Spector had been almost as weird as old Spector. True, he didn’t shoot anybody back then and he hadn’t worn fright wigs as a teenager, but he also never took a class with me or anybody I knew. Whereas everyone else at Fairfax was on college-track, Phil always appeared to be skulking around campus like a malevolent ghost. His name should have been spelled Specter.

If we had gone in for electing a student Least Likely to Succeed, it would have been no contest. Phil would have won the title without even working up a sweat. In fact, the only inkling I had that he was musically-inclined was when he sang and played his guitar at a Fairfax assembly. If you’ve ever heard his nasally speaking voice, you have some idea of how awful his singing voice was. When he finished his number, there was stunned silence in the auditorium. My best friend and I looked at each other in disbelief. I suspect that neither of us had ever heard an uglier noise in our life. Then, partly to hasten his departure from the stage and partly as a tribute to his unbelievable moxie, we began to clap softly. Soon the entire audience picked up our cue. Phil apparently mistook it for a standing ovation, and, to our collective horror, did an encore!

He had the final laugh when, a year or so after graduation, he had the number one hit record in America, “To Know Him Is to Love Him.”

The next time I saw Phil was 10 years later, when he showed up at our reunion in his chauffeur-driven limousine, accompanied not by a date, but by three huge bodyguards. Their duty that evening was to stand in front of his table, making certain that nobody got too close.

A couple of months later, I arranged to interview Spector at his home. I asked him why he had even bothered showing up at the event if he didn’t want to socialize. He said, “I wanted to show them that I wanted to talk to them as much as they’d wanted to talk to me at Fairfax.” And all along, I thought I’d hated high school!

I guess that just goes to prove that money can’t buy happiness. On the other hand, it can certainly buy you three big burly guys if you want to keep former schoolmates from pestering you.

Anyway, I told all this and a few other amusing tidbits to Ms. Grace, and then I was driven home.

The very next day, I received another e-mail from Ms. Rosenbluth. It seems I had performed so well and been so darn amusing that CourtTV wanted me back the following Wednesday. I explained that I had shot my wad on the subject of Spector, but my concerns were pooh-poohed. After all, I’d be on a show hosted by Lisa Bloom and Vinnie Politan, and was assured by Ilana that different shows had different audiences. Having learned, though, that they hadn’t displayed my book on camera, I got her promise that it wouldn’t happen next time.

The truth is, I didn’t buy that business about different shows having different audiences. I even considered spending the next several days making up stuff about Phil. I figured that no matter how bizarre it was, it would be totally believable. But sloth, as usual, got the best of me, and I decided to go with the tried and true.

I must admit the next appearance went even better than the first. For one thing, I was over my opening morning jitters. For another, they not only showed my book to America, but Ms. Bloom, presumably a liberal, actually asked me how I could bring myself to write a book called “Conservatives Are From Mars, Liberals Are From San Francisco (101 Reasons Why I’m Happy I Left the Left).” I credited it all to the wisdom that so often comes with age. As I recall, that got me my biggest laugh.

By the time I got home, Ms. Rosenbluth had sent me yet another e-mail. She wondered if I’d consider making another appearance on CourtTV. I wrote back, asking her when they wanted me. She wrote back, saying, “Tomorrow morning.”

I figured my old eyes were playing tricks on me. But they weren’t. So back I went.

This time, I appeared on Jami Floyd’s Show. This appearance was the best of all because Ms. Floyd devoted nearly as much time to my book as she did to Phil Spector. Perhaps she sensed that I preferred talking about me to talking about him.

In any case, I’ve been home for several hours now and still no word from Ms. Rosenbluth. I may have to enter rehab if I don’t hear from her soon.

It has been, all in all, a very strange, but enlightening, seven days. I mean, when you realize that I never exchanged even a single word with Phil during the six years we went to school together, it’s amazing how much mileage I’ve gotten out of our relationship.

The other thing I discovered is that when it comes to promoting a book on television, the next best thing to shooting someone yourself is knowing someone who has.