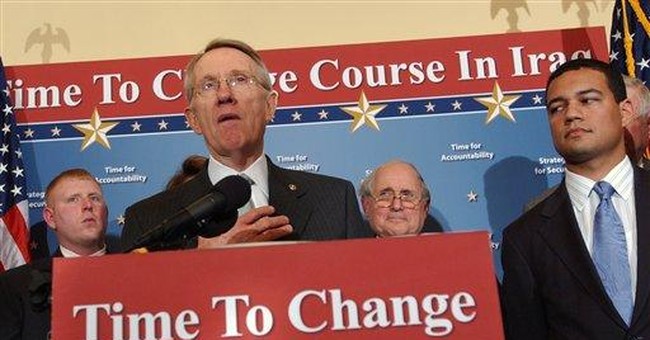 Living in L.A., as I do, I don’t have wonderful choices when it comes to my local newspapers. There’s the parochial Daily News, which focuses its attention on the San Fernando Valley. This is fine, if you happen to be more interested in the war on potholes than the war on Islamic terrorism.

The alternative rag is the L.A. Times. They slant the news so far to the left, the words almost slide off the page. A person could easily jump to the conclusion that the entire editorial board cut their teeth on Pravda and the Daily Worker. Instead of parroting the party line for Joseph Stalin, they now carry the water for the likes of Nancy Pelosi and Harry Reid.

Speaking of the Senate’s Majority Leader, wouldn’t you think that instead of simply announcing that America has lost the war in Iraq, thus simultaneously lending aid and comfort to Al Qaeda and pulling the rug out from under our troops, he’d have made it a sporting proposition? I mean, even if his scummy behavior didn’t put you in mind of Benedict Arnold, Marshal Henri Petain and Vidkun Quisling, wouldn’t you think that the man who owes his seat in the U.S. Senate to Nevada’s gambling interests, would at least have said, “The odds are seven-to-five that we’ve lost in Iraq”?

The Times is so politically correct that a hiring memo that was made public a few years ago indicated that the paper not only wanted to make certain that racial minorities be moved to the head of the line, but that gays and lesbians also be given preference.

Still, I must confess I was taken aback the other day when I opened the sports section to find an article by Times writer Mike Penner, 49, which began: “I am a transsexual sports writer. It has taken more than 40 years, a million tears and hundreds of hours of soul-wrenching therapy for me to work up the courage to type those words.”

Mr. Penner went on to state that he’d be taking a two week vacation, and when he returned he’d be Ms. Christine Daniels.

As forthcoming as he was, he neglected to mention how he intended to spend the fortnight. Although one might presume he was going in for the sort of surgery I’d rather not think about, it’s possible he’ll merely spend the time shopping for a new wardrobe. He also failed to mention why he was changing not only his first name, but his last. I also wanted to know how his wife took the news, or whether they have children, who will have to remember to buy two gifts this Mother’s Day.

I even tried to imagine how my own wife would react to such news, but all I could come up with were gales of laughter, followed by a deadly serious “Don’t you even look at my shoes!”

According to the Times, most of the response from readers has been overwhelmingly positive. I’m not sure if that means they’re extremely compassionate human beings or just plain goofy.

For my part, being of a suspicious nature, I found myself wondering if Mike Penner was working a scam. After all, the Times, which has lost hundreds of thousands of subscribers since 2000, has been firing staff at a rate that must be nightmarish for those fortunate few still drawing a salary. So, what if this is just a clever career move? What if Mr. Penner is no more a transsexual than Alec Baldwin is, but figured if he claimed to be one, the PC bosses down at 2nd and Spring Street would never dare cut him, you should excuse the expression, from the paper.