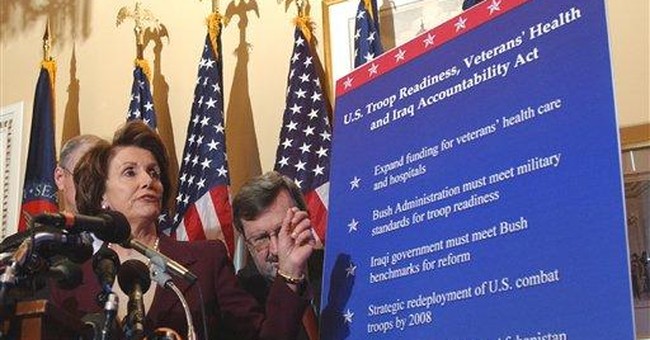 My friend Pat Sajak recently made an excellent point. He said that inasmuch as he doesn’t take global warming to heart, he sees no good reason to alter his life style. However, he wonders why those who are insisting they can feel the rising ocean lapping at their ankles don’t take drastic action to alter theirs.

He’s right, of course. I mean, assuming you are one of those people who actually has faith in U.N. reports and really believes that man controls the earth’s thermostat, wouldn’t you have to shape up? I mean, wouldn’t you think these worrywarts would all begin riding bicycles and start wearing their snow suits to bed? It’s damn hard taking their “The End is Near” placards seriously when they’re driving their Hummers to and from the demonstrations.

Consider Al Gore, the man who could give Chicken Little lessons in panic and hysteria. As ominous as global warming is, it obviously hasn’t done anything to spoil his appetite. And why, when he isn’t shrieking into a microphone, doesn’t he look terrified? If you thought that, say, a giant comet was hurtling at the earth or a dozen nuclear bombs were set to explode, would be you be grinning and saying “Cheese” to every camera pointed in your direction?

The thing about liberals is that they’re always telling the rest of us how to live and then, oh so conveniently, ignoring their own advice. Take such professional busybodies as Arianna Huffington and Bobby Kennedy, Jr., for instance. She excoriates people who drive SUVs while she and her two tots live in a mansion that I can guarantee sucks up BTUs at a rate that would make your head spin. As for Mr. Kennedy, who spends his life screaming about what the rest of us are doing to destroy the ozone layer, he’s constantly gadding about on private jets.

Let us not forget that other holier-than-thou character, Michael Moore, who has also sworn off commercial airlines in favor of corporate aircraft.

Of course, that brings us to her royal highness, Nancy Pelosi, non-stop Speaker of the House. First off, she insisted on an upgrade to a larger military jet than the one her predecessor had. She wanted one with a private bedroom, a kitchen, and room for her entire family -- second cousins included -- on a jet that was capable of flying non-stop from Washington, D.C., to San Francisco.

When some people began to question the need she had for this airborne palace, she insisted that rabble-rousers were only raising a stink because she was a woman. Poor dear! She had no sooner lifted that marble ceiling all by her wonderful self, and here it came crashing down on her tiara!

Personally, I think she should have the largest plane the military has available. As I see it, they’ll need a jumbo jet just to get Pelosi’s ego airborne.

What’s interesting about global warming is how quickly the Left added it to their manifesto, right along with pacifism, affirmative action, bi-lingual education, open borders, and outlawing gun ownership. What makes global warming such a joke is the way that the same liberals who know even less about climatology than I know about 18th century Romanian poetry are trying to pass themselves off as science experts. As Michael Crichton pointed out, when folks start talking about consensus among scientists, they’re talking politics, not science. Nobody goes around claiming there’s a consensus of experts when it comes to the laws of thermodynamics or asks the U.N. to decide if there’s any validity to DNA. Only with global warming are we supposed to put it to a vote, and then abide by the results of a fixed election.

Let a scientist suggest that man plays a very puny role when it comes to determining the earth’s climate, and you can count on Al Gore’s goon squads trying to bully him into silence, and even questioning his right to teach or to conduct research.

When it’s pointed out that in the 1970s, in a world very much like the one in which we now live, the same crowd was worried sick over the coming ice age, it’s either dismissed as irrelevant or condemned as heresy.

The last time I argued with a left-winger about global warming, he actually said, “But what if we’re right?”

What logic! What insight! I felt as if I were arguing with someone transported from the Dark Ages, someone convinced that the earth was flat. Even if you showed him photos taken from outer space, showing the curvature of the earth, he would still say, “But what if I’m right?”

Funny, isn’t it, that these alarmists are always anxious to play the “what if” game when it comes to global warming, but not when it comes to global terrorism. Ask them, for example, what happens if we simply pull our troops out of Iraq, leaving it ripe for Al Qaeda? What happens if we ignore Iran and its threat to nuke its enemies? Or what happens if we decide to quit policing the world and leave such matters strictly up to the U.N.? (After all, they did a bang-up job in Cambodia in the 1970s and are doing equally fine work today in Darfur.)

The reason it’s so easy to despise liberals isn’t simply because they’re such blockheads, but because they are so hypocritical and self-righteous.

Understand, though, that I’m not suggesting they are entirely worthless. What I am suggesting is that we establish whether my suspicion is correct that they not only think like chickens and squawk like chickens, but actually taste like chicken. We could then raise them as livestock.