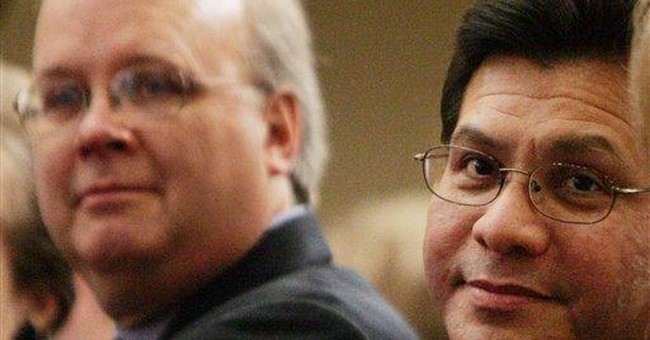 George W. Bush and Attorney General Alberto Gonzales are taking a lot of heat from Democrats lately for allegedly discharging some U.S. attorneys for political reasons. Of course, the president has every right to fire any political appointee in his administration for any reason, political or otherwise. In hindsight, it would have been far better if the administration had just said so from the beginning instead of wrongly implying that the attorneys were fired for cause.

Nevertheless, Democrats will continue to milk the issue for all it is worth in an effort to create a scandal and embarrass Bush by possibly forcing him to fire his close personal friend Gonzales. It may not be fair to Gonzales, but that's the way the political game is played in Washington. As they say, if you want a real friend here, get a dog.

However, Democrats should be wary of pressing Bush too far because there is ample precedent on their own side of Democratic presidents who fired U.S. attorneys and other high-ranking officials just to halt investigations of their political allies. For example, two Democratic presidents—Franklin Roosevelt and Harry Truman—worked for years to protect a notorious racketeer named Thomas Pendergast because he ran a Democratic machine in Missouri.

Pendergast's criminality was on display for all to see in Kansas City, where his organization openly ran prostitution, drug and gambling operations in the 1930s. He was also the recipient of a vast amount of graft, which was dutifully paid by all of his henchmen, including Truman, who ran the Pendergast machine in Jackson County, Missouri. There's no evidence that Truman enriched himself from Pendergast’s corruption, but he was dutiful in making sure that inflated county contracts went to Pendergast’s cronies, who paid Pendergast a cut for the business.

In 1935, an assistant secretary of Commerce named E.Y. Mitchell, who was a Missouri native, tried to get the Roosevelt Administration to do something about all the corruption in Kansas City. Mitchell was told repeatedly to shut up and mind his own business. When he would not, Roosevelt fired him.

That same year, however, Pendergast's greed got the better of him—he had a severe gambling addiction and lost the equivalent today of millions of dollars per year on horse races. Pendergast took a big kickback from the insurance industry for fixing a regulatory problem for it in Missouri that came to the attention of federal authorities.

U.S. Attorney Maurice Milligan, with the support of Federal District Court Judge Albert Reeves, went after Pendergast. After failing to convict him on influence peddling, Milligan pursued him for not paying taxes on the income—the same technique that had led to the downfall of gangster Al Capone in Chicago. In 1939, Pendergast was convicted of tax evasion and sentenced to federal prison, breaking his power once and for all.

While the federal investigation into Pendergast was still ongoing, Truman, who was elected to the U.S. Senate in 1934, tried to get Milligan dismissed. In 1938, he attempted to block Milligan’s reappointment as U.S. Attorney even though he was a Roosevelt appointee with the support of Missouri’s other Democratic senator, Bennett "Champ" Clark.

On February 15, 1938, Truman personally filibustered Milligan’s reconfirmation by the Senate, calling him incompetent, immoral and guilty of using "Hitler-Stalin tactics." Time magazine called Truman’s speech "one of the bitterest…ever heard on the Senate floor."

Despite Truman's efforts, Milligan was endorsed by the Senate and went on to bring down his close friend and mentor, Pendergast. But Truman never forgot what he had done. Within days of becoming president in 1945, after the death of Roosevelt, one of Truman’s first acts was to fire Milligan. When Attorney General Francis Biddle protested Truman’s action, he fired Biddle, too.

In other ways as well, Democratic presidents have long used federal law enforcement agencies for political purposes. Roosevelt often had his political enemies audited by the Internal Revenue Service. He also used the Federal Bureau of Investigation to investigate and tap the phones of journalists and newspaper publishers who opposed his policies.

In the 1960s, President John F. Kennedy, Attorney General Robert Kennedy, and President Lyndon Johnson also used the FBI and IRS to investigate and harass their political opponents. As is well known, they bugged Dr. Martin Luther King Jr.'s phones and hotel rooms just to gain political intelligence—falsely justifying their actions on the grounds that King was in league with the Communists.

The point of this history lesson is not to excuse or justify anything Bush and Gonzales may have done, which seems mainly stupid rather than malicious, but to suggest that Democrats would be wise not to push their protests too far. Their own presidents have done far worse with less justification. That's a fact.