Bronson Stocking
|
Posted: Aug 01, 2020 7:45 PM
Share   Tweet
The opinions expressed by columnists are their own and do not necessarily represent the views of Townhall.com. 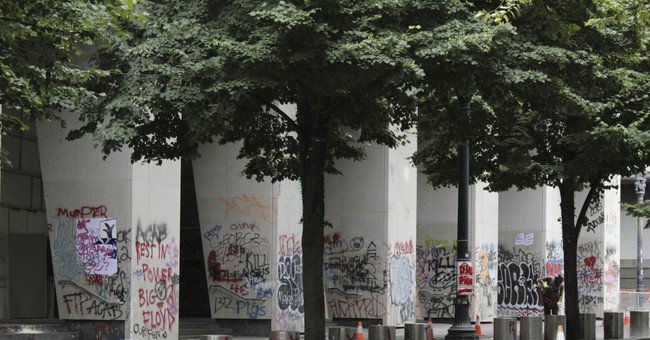 Leftists in Portland have been trying to destroy a federal courthouse on a nightly basis, and now the Democratic Party is attempting to destroy the entire federal judiciary as we know it by adding a radical new plank to the party's platform.

Even conservatives who take issue with the president on certain things have to applaud Donald Trump's remaking of the federal judiciary. The president and the Republican-controlled Senate have appointed a record number of judges to the U.S. circuit courts through normal constitutional means. To be fair, Republicans were aided greatly by former Senator Harry Reid's short-sighted decision in 2013 to kill the filibuster in order to ram through a handful of judges for then-President Obama. Thank you, Harry Reid.

But with help from the Federalist Society and the Heritage Foundation, Trump's new picks have been on the younger and more conservative side of things. This had led the Democratic Party, which has been filling up the federal bench with activist judges for decades, to have a complete meltdown. Like children who only want to play a game so long as they're winning, Trump's windfall of judicial appointments has Democrats now calling for "structural court reforms," E.g. court packing, in the party's new platform.

The New York Times reports that far-left activists have succeeded in adding a plank to the forthcoming platform that calls for unspecified "structural" reforms of the federal judiciary. According to the Times, backers of the new plank say "the broad statement represents a significant advance toward beginning a conversation among Democrats about how to respond to the substantial imprint that President Trump and his conservative allies have made on the federal bench."

Whenever a system is no longer controlled by the left, Democrats demand "structural" reform. "Structural" is a Marxist codeword.

"[Republicans] have undermined the legitimacy of our courts through an anti-democratic, win-at-all costs campaign that includes blocking a Democratic president from appointing a justice to the Supreme Court and obstructing dozens of diverse lower-court nominees. The Democratic Party recognizes the need for structural court reforms to increase transparency and accountability," the new plank reads.

Actually, the Republican Senate's 2016 decision to wait until after the election to fill the Supreme Court vacancy opened by the late Justice Antonin Scalia is steeped in tradition. It's known as the "Thurmond Rule," named for Sen. Strom Thurmond who blocked President Johnson from appointing a chief justice in a lame-duck election year. Democrats have invoked the Thurmond rule whenever it's benefited them politically, like in 1992 when then Chairman of the Senate Judiciary Committee Joe Biden said that lame-duck President George H.W. Bush "should consider following the practice of a majority of his predecessors and not — and not — name a nominee until after the November election is completed."

According to The New York Times, progressives view presumptive Democratic nominee Joe Biden and his campaign's willingness to accept the radical new plank as a sign that Biden and his team are now open to ideas like term limits and court-packing.

"We cannot just sit by and say that is federal law while Trump has got the courts for a generation," Ilyse Hogue, NARAL president and a member of the platform committee, is quoted in the Times. "It is just not acceptable."

Democrats being out of power is never acceptable to Democrats, and they'll stop at nothing to get it back.

Trump has already appointed a record 50 judges to the U.S. circuit courts, whereas Obama only appointed 19 at the same point during his first term. But what really keeps Democrats up at night is the possibility of a Trump reelection, which is why Democrats and the media are pulling out all the stops this year.

A Trump reelection might allow conservatives to wrest control away from liberals over the federal appeals courts. And while Supreme Court appointments garner the most attention -- and President Trump has already picked two justices -- nearly all federal cases end in the courts of appeals. According to Fox News, Trump has already flipped one appeals court from a majority of Democrat-appointed judges to a majority of Republican-appointed ones. Trump is now just two seats away on five additional courts from achieving Republican-appointed majorities.

A reelection win for the president would give conservatives a chance to flip most if not all federal appellate courts away from their Democratic-appointed majorities. And that means more sane rulings for years to come.