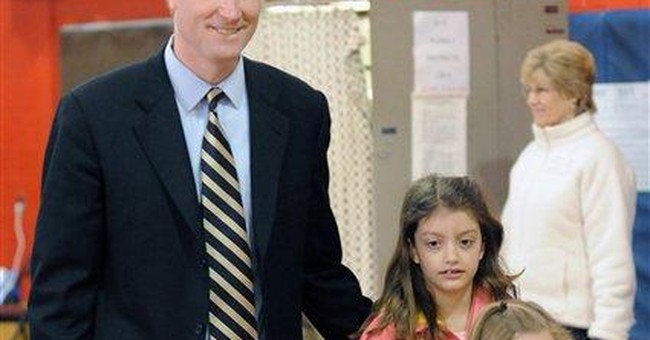 With local support continuing to erode for incumbent Democrat Scott Murphy, the campaign in New York’s 20th Congressional District is going to come down to the wire on Election Day.  Having overcome Murphy’s significant cash advantage and backing from national Democrats, retired Army Colonel Chris Gibson’s strong campaigning quickly made this seat one to watch.  The latest polling shows Gibson leading Murphy, and The Cook Political Report rates NY-20 as a “Toss Up”.

After winning last year’s special election by a mere 726 votes, Murphy promised “to bring jobs, opportunity, and prosperity back to Upstate New York.”  The unfortunate reality, voters were quick to learn, was that once Murphy got to Washington, it didn’t take him long to become part of the problem.  He made his support of the failed stimulus bill clear and, while in Congress, he voted for Pelosi’s government takeover of healthcare, which cuts Medicare benefits and raises taxes.

Gibson represents a new path forward for a district disappointed in a representative who has failed to create jobs and refused to demonstrate any sense of fiscal discipline.  While Murphy keeps busy with desperate attempts to come off as independent from party bosses, Gibson has shown he’s ready to lead and accept another mission in service of his country.

The 20th District is traditionally conservative, having been held by right of center Republicans since the 1970’s. Gillibrand, a moderate Democrat, was able to win the district in 2006 from incumbent conservative Republican John Sweeney by a small margin and was re-elected in 2008 by riding the coattails of Barack Obama, who narrowly won the district himself with 50.7%. In 2004, George W. Bush carried the district by an 8-point margin. The Albany-area district is currently rated by the Cook Political Report as R+2.

This year, the national political environment is different than it was during the special election in March 2009, and has made a dramatic shift towards the GOP’s favor. According to Stu Rothenberg from the Rothenberg Political Report, “Obama is more controversial now, and opposition to his health care initiative, particularly among many seniors, and to heavy federal spending has changed the landscape. Also, Democrats don’t have a popular local politician like now-Sen. Kirsten Gillibrand to give cover to their nominee.”

With a 24-year Army career under his belt, Gibson has served our nation honorably and would like to continue this service by representing his community in Congress.  He also taught American politics at the United States Military Academy at West Point, earned an MPA and PhD in Government from Cornell University, and authored a book on national security titled Securing the State.  Gibson has already achieved ‘On the Radar’ status, the first tier of the NRCC’s three-level Young Guns recruitment program.

Gibson has also picked up cross-party endorsements, including the Columbia County Independence Party, which is vital in New York State as candidates names will appear on multiple party lines. On the other hand, Murphy, who votes with Speaker Pelosi 88.7 percent of the time, is a partisan who would not be confused as an independent. In just a short time, Murphy’s liberal voting record has demonstrated that he is just another rubber-stamp for the Obama-Pelosi agenda. Murphy not only supported cap-and-trade and announced he would have voted for the failed $787 billion stimulus, but also he flipped his healthcare vote from “no” to “yes,” demonstrating the influence Pelosi and union bosses have over him.

Please Note: This article, first posted on 06/29/2010, originally read that this race was rated a “Toss-Up” by the Cook Political Report.  It also stated that Congressman Scott Murphy voted for the Stimulus bill. These inaccuracies have been corrected above.  However, the NRCC believes that Murphy’s voting record, the Republican lean of the district, and the strength of Chris Gibson’s candidacy makes this a strong pick-up opportunity this November.