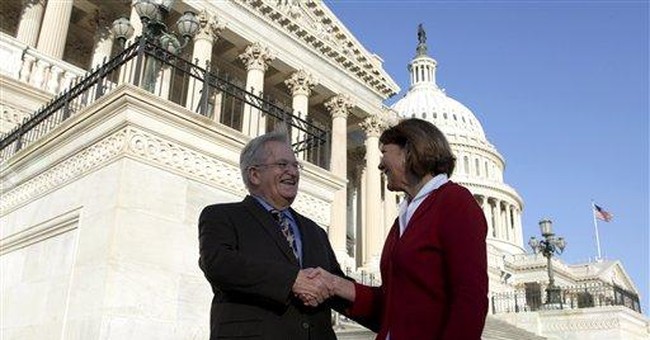 Recently named one of the ten most vulnerable incumbents this cycle, freshman Democrat Ann Kirkpatrick has found herself squarely on the defensive against Republican Paul Gosar.  Gosar, who achieved “Young Gun” status in the NRCC’s recruitment program, has been running a strong campaign and is positioned to win in November.

With non-partisan political handicapper Charlie Cook moving the race to “Lean Republican”, recent polling that shows Kirkpatrick neck-and-neck with Gosar, and even the DCCC contemplating pulling out of the district, the latest news seems to be hitting the imperiled Democrat pretty hard.  Aside from the fact that she is relying heavily on misleading and false ads, she’s also taken an unusual approach to motivating her base.  Perhaps signaling she’s planning to throw in the towel, Kirkpatrick emailed her supporters about an “upset victory” for Republicans – a result Gosar is working tirelessly to accomplish.

Check back as this race continues to develop and be sure to keep an eye on Arizona this Election Day.

The First District of Arizona has been solidly Republican and has voted this way in past presidential elections.  President Bush won the district effortlessly in 2004 with 54 percent of the vote, and Arizona native John McCain won similarly with 54 percent in 2008. Despite the Republican tilt of this seat, the representative from the First district is Democrat Ann Kirkpatrick, whose out-of-touch fiscal policies have led to needless spending that has put small businesses in a bind. Republican Paul Gosar is waging a strong challenge against Kirkpatrick, who continues to neglect the conservative tendencies of her constituents and the current border security crisis affecting her state. While 70 percent of Arizonans support SB1070, the Arizona immigration law, Kirkpatrick stands against the majority of her constituents in opposition to it.

Within two short years of taking office, Arizona’s unemployment has jumped from 6.7 percent to an unacceptably high rate of 9.6 percent under Ann Kirkpatrick’s failed agenda of more spending and fewer jobs. Middle-class families are struggling, yet Kirkpatrick has a record of voting with Nancy Pelosi over 86 percent of the time, rubber-stamping a failed trillion-dollar stimulus which has failed to produce jobs and a disastrous healthcare bill that places stringent regulations and higher taxes on businesses. With no relief in sight, voters will turn to the polls in November to send a loud and clear message to out-of-touch Democrats that they’re tired of suffering under Kirkpatrick and her party’s failed policies.

In recent times, in an effort to avoid townhall meetings, Kirkpatrick scheduled a “meet the voters” outside of a Safeway in the 100 degree Arizona summer heat.  During this attempt, she was only able to speak to about two dozen voters while the rest of the participants waited confused and distraught in line.  In a similar session in Holbrook, Kirkpatrick walked out on her constituents after getting frustrated when the voters could not hear her and asked that she speak louder.  As a result of her track record, independent groups have begun airing their grievances against the freshman Democrat and the NRCC recently expanded our target list to include the seat.   Fortunately for voters in the First District, the American Action Forum poll shows that Kirkpatrick is down 6 points and Republican candidate Paul Gosar is favored to win.

Gosar is a small business owner and a dedicated family man.  Having owned his own dental practice for more than 25 years, Gosar knows first-hand how the Democrats’ economic policies will affect Arizona’s small businesses. His work as a dentist has earned him numerous awards and honors such as the Arizona Dental Association’s “Dentist of the Year” and an induction into Arizona Dental Associations Hall of Fame.  He was previously the President of the Northern Arizona Dental Society and the Arizona Dental Association.  Gosar was also Vice-Chair of the ADA Council on Governmental Affairs.  As his concern rose for the state of the government and his district, he decided to run for office and justly represent the constituents.  Gosar truly understands the values and ideologies of Arizonans and Americans alike.  He is seeking fewer government imposed roadblocks and a more transparent government to protect jobs and bring more local and outside business to Arizona.

In November, Arizona voters will have a chance to put Kirkpatick’s out-of-touch policies to rest and start fresh with Republican Paul Gosar. You can find more by visiting his website, Facebook, or Twitter.