In June 2009, he transitioned from active duty to the USAF Reserve to focus on representing the people of Arizona’s 8th Congressional District.

As a combat veteran of Operation Enduring Freedom, he has provided Close Air Support and rescue escort to Joint American Forces and Coalition troops on the ground in Afghanistan.

As an A-10 Instructor Pilot and Flight Commander, Brian has been and continues to be responsible for the lives, skills, and success of hundreds of combat pilots. He has been a proud member of six Fighter Squadrons in his career. He currently leads and instructs new A-10 pilots.

Brian has lived, worked, studied, and trained in more than two dozen countries around the world. His extensive international experience has provided him a global view and is fundamental to the perspective Brian will take to the U.S. Congress.

Hard work and traditional values underscore Brian’s upbringing. His parents began their own small business in 1982, provided for their family of four, and still own it today. His parents instilled in him and his brother the guiding principles of integrity, honesty, and perseverance. These core values are reflected in his everyday life and will direct his work in Washington.

In 1998, Brian earned a Bachelor’s of Science degree in Political Science from Northern Arizona University in Flagstaff where he studied on a USAF academic scholarship. While at NAU, he met Alyson and they married in 2001. Both Brian and Alyson were commissioned as officers in the United States Air Force in 1998. They have chosen to raise their two young sons, Noah and Lincoln, in Tucson. 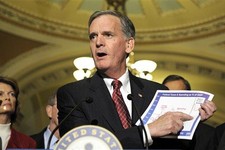