Media Have a Proposition for Calif. Churches: You're Bigots 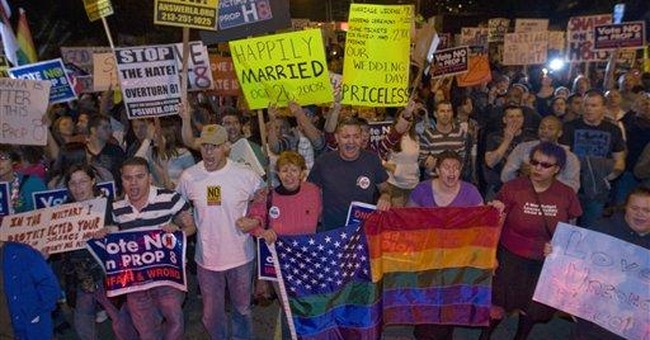 The liberal media worked overtime against California’s marriage amendment, Proposition 8, which the voters passed 52 to 48 percent.   After the Nov. 4 vote, the media quickly jettisoned professional objectivity – and respect for democracy – to spin a yarn about the pain of victimhood.  Now they are working to elevate angry gay protesters who are vilifying opponents and targeting churches.

As reported by CMI’s Colleen Raezler, ABC, NBC and CBS aired a total of 13 news stories on Prop. 8 in the five days following the vote.  Six of the stories, nearly half, emphasized the reactions of the roughly 18,000 same-sex couples whose California “marriages” have been invalidated.  Only four Prop. 8 supporters made it on air, compared to 15 opponents.  None of the networks could spare even 15 seconds of precious air time to explain why keeping intact the foundational institution of human society might be a good idea.

The worst example we’ve seen of TV reporting on Prop. 8 protests came from the local CBS station in Palm Springs, Calif.  On the grounds of City Hall, furious “gay” protesters knocked a Christian cross out of an elderly woman’s hands and stomped on it.   The woman remained calm and collected.  When reporter Kimberly Chang tried to interview her, protesters screamed and blocked the camera with their signs.  Hilariously, the station identified the victimized woman as “Phyllis Burgess, Involved in Prop 8 Rally Altercation.” That’s like saying Poland was involved in a border altercation with Nazi Germany.  In a masterpiece of moral equivalence, CBS anchor Kris Long told viewers, “There’s a lot of anger and a lot of hate, quite honestly, on both sides.”

Print journalists have more freedom, time and space than their broadcast colleagues, so they should have produced a more balanced account of the Prop. 8 controversy.  They did, for roughly 48 hours.

Initial press reports last Wednesday and Thursday included statements by Prop. 8 supporters and the vital fact that a 70-30 majority of African-American voters pushed Prop. 8 over the top. By Friday, Nov. 7, however, news reports focused on “civil rights” street theater by fuming Prop. 8 protesters.  The villains of the piece, Catholics, evangelical Protestants and especially Mormons, no longer were allowed to explain their views or even to defend themselves against ugly charges of bigotry.  The pivotal support of black voters quickly dropped out of the story.

Newsrooms apparently followed the lead of the editorial pages.  A Nov. 6 New York Times editorial condemned “the ugly outcome of these ballot fights,” referring to votes in three states – California, Florida and Arizona – to uphold one man-one woman marriage.  According to the Times, “the immediate impact of Tuesday’s rights-shredding exercise is to underscore the danger of allowing the ballot box to be used to take away people’s fundamental rights.”

In this editorial, the Times broke new ground in political philosophy.  Who needs all that Founding Fathers blather about government requiring the consent of the governed when razor-thin 4-3 judicial majorities are creating new human “rights?” Maybe America needs some new rules regarding court-concocted “rights.” When a court decides to override public opinion and thumb its nose at the moral order created by nature’s God, shouldn’t we require at least a 5-2 majority?  But I digress.

The Chicago Sun-Times editorial board chimed in on Nov. 7, describing popular support for one man-one woman marriage as “discrimination and nonsense.”  The New York Times ran seven letters to the editor on Prop. 8 – six by opponents.

On Saturday, Nov. 9, the Los Angeles Times posted a story headlined “Anti-Prop. 8 protests spring up in California.”  A photo showed angry protesters waving signs accusing Mormons of “hatred,” and proclaiming “I am a second class citizen.”  The Times quoted several speakers at an anti-Prop. 8 rally, including a woman who called traditional marriage supporters “bigots, bigots, bigots.”  Ignoring minimal standards of decency, not to mention journalist ethics, the Times gave Prop. 8 supporters no opportunity defend their honor.

A Nov. 10 AP/New York Times story, “In California, More Protests Over a Vote On Marriage,” focused on 1,000 protesters gathered Sunday outside Saddleback Church, the evangelical Protestant megachurch pastored by Rick Warren.  The story described protesters as “advocates of equal rights for gay people.”  A “volunteer” from the Human Rights Campaign, a gay pressure group, accused Saddleback of spreading “misinformation” and telling “obvious lies.”

The reporter didn’t try very hard to allow Saddleback to respond: “A message for comment left at the church’s main office, which was closed on Sunday, was not immediately returned.”

A secular reporter can be forgiven for not knowing that Christian church offices are usually closed on Sundays.  But shouldn’t he have learned, somewhere along the line, that churches themselves are open for business?  The reporter was on the Saddleback campus.  If he had bothered to peek through the windows, he surely would have seen a few people milling about.  Did it not occur to this intrepid soul to walk into the church and ask Pastor Warren to reply?

Perhaps he was too busy bonding with those angry protesters.