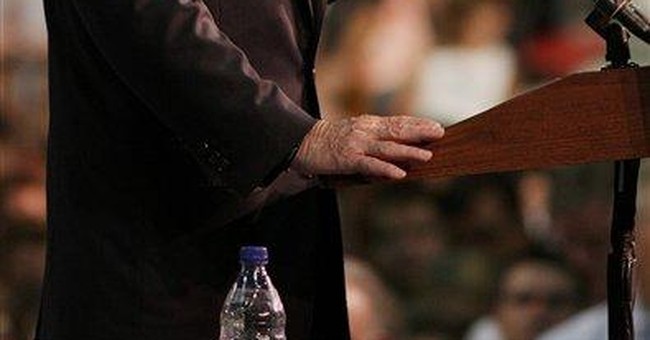 In TIME magazine’s perspective, John McCain is a master manipulator and Barack Obama is a victim. Or at least that’s what the editors want you to think.

TIME’s two lead campaign stories on the Web site Monday morning are marvelously contrasting in their tones. The Arizona senator gets a punch in the snoot: “McCain’s Outraged and Outrageous Campaign.” The Illinois senator gets a sympathetic cuddle: “For Obama, Race Remains Elephant in the Room.”

The first story, by Michael Scherer, accuses the GOP presidential nominee of manipulating voters’ emotions, and media coverage, by using false indignation as a political tactic. McCain “baited the outrage hook” primarily by taking umbrage at the “alleged mistreatment that the press and the Obama campaign were heaping on Alaska Gov. Sarah Palin.”

A glance at TIME’s own Web site suggests strongly that the McCain campaign has legitimate grounds for complaint.  On Sept. 2, TIME posted the shameful “Searching for Palin’s ‘Hot Photos’”; Sept. 9, “Skeletons in Palin’s Closet?”; Sept. 10, “Sarah Palin’s Myth of America”; Sept. 11, “How Did Palin Do? Two Views [both critical of Palin]; and Sept. 11, “Palin and Troopergate: A Primer.”

What “outrageous” act has McCain committed, in Scherer’s eyes?  He “compared Obama to Britney Spears, Paris Hilton and even Moses, mocking Obama’s ‘celebrity’ in a way that was both controversial and certain to grab lots of free airtime.” Pretty thin gruel, but Scherer gets an assist from kneejerk TIME leftie Joe Klein.  In his Sept. 10 blog, “Apology Not Accepted,” Klein huffs that McCain’s ad grilling Obama for supporting comprehensive sex ed for kindergartners is “one of the sleaziest ads I’ve ever seen in presidential politics, so sleazy that I won’t abet its spread by linking to it.”

TIME’s Karen Tumulty asks in a blog, “Why doesn’t Obama hit back harder?”  She points to the second lead story, Michael Grunwald’s “For Obama, Race Remains Elephant in the Room.” Grunwald suggests that Obama is being victimized by America’s racism: “So Obama is probably wise to ignore the liberals who keep begging him to drop his air of unflappability and start taking Republican scalps. White America already embraces black celebrities, even ‘flashy’ ones. But it has never really warmed up to an angry one.”

What campaign are Tumulty and Grunwald watching?  This “Saint” Obama they describe lacks even a fleeting resemblance to reality.  The truth is, Obama is attacking much more aggressively than McCain ever has.  Just look at a few of Monday’s headlines:  “New Obama Ad Questions McCain’s Honor” (Breitbart); “Biden: McCain is Ex-reformer Turned Rove Disciple” (AP); “Obama: McCain Shows ‘Lack of Interest’ in Issues” (The Hill); and a tag team assault based on a single statement taken out of context, “McCain Says Economic ‘Fundamentals’ Strong, Obama Attacks (AFP) and “Biden Lashes Into McCain for ‘Fundamentals Are Strong’ Remark” (The Hill).  Even the liberal Washington Post gave Obama “three Pinocchios” for “significant factual errors” Tuesday morning, for running an ad implying falsely that some of McCain’s advisors are currently working as D.C. lobbyists.

Scherer suggests Obama’s aggressiveness began in earnest only “last week,” with Obama’s attack on McCain for being so old he doesn’t know how to use a computer.  But Scherer himself acknowledges that fully a month ago, Obama was attacking McCain for not knowing how many houses his wife owns.  Obama jumped all over his first opportunity to play the class warfare card.

Also, The Wall Street Journal reports that two weeks ago, Obama “airdropped a mini-army of 30 lawyers, investigators and opposition researchers” into Alaska, to “dig into Palin’s record and background.”   This onslaught must have been planned well in advance, because the “first wave arrived in Anchorage less than 24 hours” after McCain chose Palin on August 29.

Barack Obama was clearly willing to and intent on taking the low road, ridiculing McCain and compiling a dossier on Palin even before the Alaska governor profoundly changed the presidential race.  Yet TIME portrays him as if his hands are clean.  If anyone has displayed great skill in manipulating the media, it’s Obama.  If anybody has been victimized, it’s McCain and Palin.

Without doubt, TIME is providing a distorted view of the character of the two major party presidential tickets (for one possible explanation why, see CMI’s report on the liberal partisan overseeing TIME’s campaign coverage, “TIME’s Religious Democratic Crusader”).  Unfortunately, TIME is not alone.  A self-described Hollywood director and visual effects specialist, unwilling to give his name for fear of reprisals, has written a fascinating article alleging that ABC used “camera trickery” to make Palin look like “weak prey” in her interviews with Charlie Gibson.  On the American Thinker Web site, Cecil Turner has exposed serious errors in AP’s reporting of Sarah Palin’s supposed attempts to censor library books.  Atlantic Monthly is reportedly about to apologize for photos retouched to ridicule the GOP ticket.

CMI has no objection to tough investigative reporting and negative campaigning. Done properly, such criticism sheds a great deal of light on the character and values of the candidates, so we’d like to see more of it.  Much of the campaign reporting this election season, however, is not being done properly.  Many reporters are so biased they seem blind to what’s happening right before their eyes. Others appear willing to deliberately deceive their viewers.  News consumers need to take what they’re reading, and even what they’re seeing, with a grain of salt.