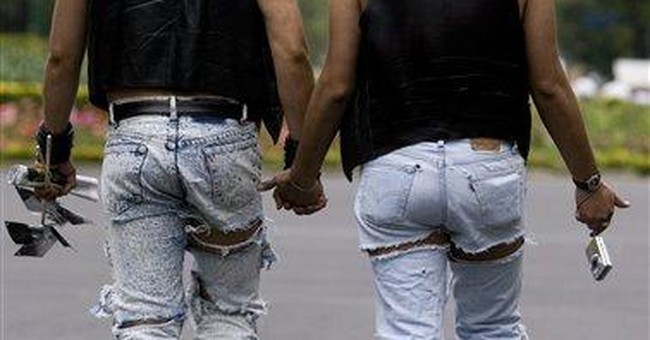 This past weekend, the National Lesbian and Gay Journalists Association (NLGJA) held its annual convention here in Washington D.C., attracting hundreds of journalists – and ringing endorsements – from almost every major publication and broadcaster in the news media.

In a full-page ad in the convention program, NBC Universal declared it is “proud to support NLGJA,” under the bold headline: “YOUR VICTORIES ARE OUR VICTORIES.”

After listening to speaker after speaker express hatred and contempt for political and religious conservatives while plotting how to advance the homosexual activist agenda through journalism, I’m left wondering whether Americans know the extent of the media’s bias on homosexual issues. Do they know that the news media have thrown themselves fully behind the gay rights movement?  Nearly every major news organization sponsored the convention, bought space in the program or set up recruiting booths – demonstrating that they are willing to hire journalists with a political axe to grind.

Hatred. NBC/National Journal reporter Matthew Berger said he experienced “reverse Stockholm syndrome” while on the campaign trail covering GOP religious conservative Mike Huckabee. “Stockholm syndrome” is what afflicts hostages who come to love their captors. If Berger’s feelings changed after traveling with the Huckabee campaign, they went in the opposite direction. He acknowledged how difficult it is for a journalist to do his job when you “hate” the people you’re covering. Berger said he was happy when he was transferred to the “gay-friendly” Rudolph Giuliani campaign.

Sending an outspoken activist like Berger, the former president of NLGJA’s Washington D.C. chapter, to cover the Huckabee campaign is like sending a hard-right activist to cover the Obama campaign. What was NBC thinking? Maybe they had no choice. Does NBC have anybody on staff who doesn’t hate religious conservatives?

Kerry Eleveld, news editor for a homosexual-themed magazine appropriately named The Advocate, described as “refreshing” Pastor Rick Warren’s questions to the presidential candidates at the Saddleback Church forum on August 16. However, she also got big laughs when she said others might find the pastor’s participation in the political process “nauseating.”

Discussing attitudes toward homosexuality, Los Angeles Times opinion pages editor Robin Rauzi revealed Big Media contempt for the rubes in Flyover Country: “We feel our readers are ahead of where they are in Kansas City.”

Political activism. During a sparsely attended (11 out of hundreds of conferees) session promoting objectivity in news coverage, a reporter from a Florida newspaper acknowledged his biases: the “public’s right to know,” and “equality.” By “equality,” he meant the homosexual activist political agenda. He revealed the tension that ought to have bedeviled every journalist at the conference: how to avoid ideological bias while covering the news.

On a partisan level, the conferees clearly leaned toward the Democrats. One speaker frankly admitted that the homosexual activist community generally expects most gays to be Democrats. Two panels touched on a partisan controversy raging in the homosexual community: James Kirchick, Assistant Editor of The New Republic, said gays are “shocked” and “up in arms” because the owner of “Manhunt,” a very popular same-sex “dating” site, contributes money to presumptive GOP presidential candidate John McCain.

Even Patrick Sammon, president of the GOP homosexual organization, the Log Cabin Republicans, stressed that his group does not support social conservatives. Sammon called former Pennsylvania GOP Sen. Rick Santorum a “bigot.” Another conferee observed that “some people” in D.C., not necessarily journalists, make it their business to “out” homosexual staffers of GOP congressmen with an “anti-gay agenda.”

Many homosexual journalists also view “outing” as a political weapon.  During a session on covering sex scandals, a panel of journalists discussed extensively whether the news media should disclose the sexual preferences of politicians.  The consensus?  “Yes,” if the closeted politician publicly opposes the homosexual political agenda.  Said one panelist, “If they are taking actions in their public life to deny gay and lesbian rights…then yes.”  Another said, “If someone is advocating something that is specifically, uh, anti-gay, they’re on a crusade, they are a Religious Right person on a crusade … if they are advocating something that is going to take away our rights and they are presenting themselves false and they’re throwing the sexuality issue out there, not their own, then I do think it’s fair game.”  Closeted politicians who oppose the agenda get exposed; closeted politicians who promote the agenda get protected.  These journalists were clearly willing to allow their political interests to color their reporting.

A panel supposedly intended to foster accurate coverage of religion quickly turned into a political strategizing session aimed at “retaking Christianity” from conservatives. The moderator and organizer of the panel, furniture magnate Mitchell Gold, is the founder of Faith in America, a homosexual activist organization targeting the religious community.

Gold said, “The single biggest [obstacle] to gays having equal rights in the country is religion,” so “I set myself to learn about it.” One of the panelists, Ann Craig, director of Religion, Faith & Values for the Gay and Lesbian Alliance Against Defamation (GLAAD), said, “We’re not getting anyplace until we begin conquering the debate” in the religious community.

How to conquer the debate? Panelist Jimmy Creech, the former United Methodist pastor defrocked in 1999 for conducting same-sex “marriages,” told the journalists to seek out “other voices” rather than quote the 700 Club’s Pat Robertson and Focus on the Family founder Dr. James Dobson. According to Creech, conservative Christian leaders like Robertson and Dobson are “the most radical Christians in America today,” and represent “a very minority point of view.” Creech told the reporters not to allow Robertson and Dobson to “use” them to get publicity.

The sole journalist on the panel was David Waters, editor of the Washington Post/Newsweek “On Faith” blog. Waters urged reporters “not to go” to established leaders like Robertson and Dobson, contrasting them to “real people” in the pews. He also described Creech as “one of my heroes.”

Sponsorship. Who paid for this blend of journalism and activism? The NLGJA convention was underwritten by most of the biggest names in the news business. At the $25,000 level: the McClatchy Company. At the $15,000 level: CBS, CNN, Gannett Foundation, ESPN, and Hearst Newspapers. Kicking in $10,000 were NBC, Fox Business, Fox News, News Corporation, and The Washington Post. Good for $5,000 were ABC News and Bloomberg. Publisher and broadcaster Cox Enterprises bought the inside cover of the program, and CBS News “salutes NLGJA” on the back cover. Gannett (USA Today) “salutes” NLGJA in a full-page ad, as does The New York Times in a half-page ad. A.H. Belo Corporation (Dallas Morning News, Providence Journal) declares it is a “proud sponsor” in a full-page ad, while The Washington Post “congratulates” NLGJA in its full-page ad.

Recruiting. NLGJA members generally view themselves as members of an oppressed minority group, which suggests they’re likely to bring a political agenda to their journalism. The NLGJA convention doesn’t seem to be a likely place to find objective reporters. Nevertheless, most of the top organizations in journalism sent recruiters: The New York Times, The Washington Post, CNN, ABC, NBC, CBS, AP, NPR, Bloomberg, even conservative-leaning Fox. The poor Fox recruiter seemed lonely.

The political and ideological bias so readily apparent at the NLGJA convention reflects a glaring problem in the news industry as a whole. Reporting the news objectively is still a matter of professional pride to most journalists, but many also have bigger fish to fry.