An Offense Against Free Market Capitalism: The Export-Import Bank 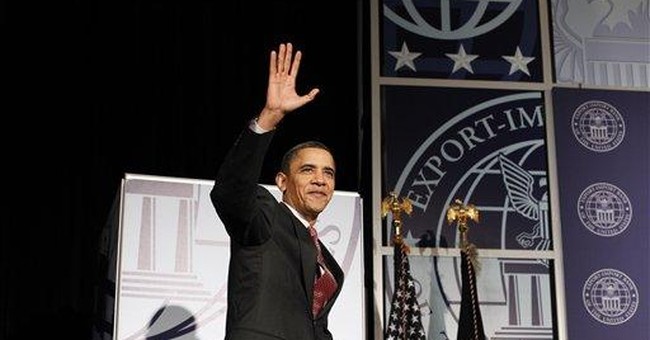 A 1934 creation of President Franklin D. Roosevelt, the Export-Import Bank was meant to facilitate trade between the United States and other nations.

Its initial focus was lending to the old Soviet Union. But over the years, the Ex-Im Bank portfolio has greatly diversified.

Eighty years on, it has loaned billions to numerous foreign nations and companies. The idea, as always, is to encourage those foreign entities to purchase U.S. goods. In reality, however, the so-called bank has outlived its usefulness.

Today, the Ex-Im Bank is fast approaching its statutory cap of $100 billion in loans, and its charter is expiring. With the support of many in Congress, that bank has requested increased loan authority and reauthorization of its charter. In this situation, a do-nothing Congress is the taxpayers’ best friend. It could reduce their exposure to billions of dollars in potential loan losses simply by letting the clock run out on the Ex-Im Bank.

Congressional Quarterly reports that House Majority Leader Eric Cantor (R-Va.) and House Minority Whip Steny Hoyer (D-Md.) are working on a deal to bulldoze conservative opponents of reauthorization in the House. In the Senate, Majority Leader Harry Reid (D-Nev.) has pledged to bring a bill to the floor soon. Most likely Reid will green-light Sen. Maria Cantwell’s (D-Wash.) bill, which would extend the bank’s lease until 2015 and boost its lending authority to $140 billion.

While serving in the Senate, Barack Obama regarded this bank is an example of failed government policy. In 2008 he called the Ex-Im Bank "little more than a fund for corporate welfare.”

Sen. Jim DeMint (R-S.C.) agrees with those sentiments. Writing in the Washington Examiner, he exposed the bank as a vehicle for international crony capitalism. The Ex-Im Bank’s practice of loaning to private companies is plain “wrong,” he explained, "because all companies – foreign and domestic – should compete on a level playing field, so that success goes to those companies who offer the best products and services at the lowest prices.” .

Beyond doubt, the bank has made loan decisions based on politics, rather than the beneficiary’s ability to repay debts. Both conservatives and liberals can recognize the moral hazard of that practice.

The Wall Street Journal opined that "if the GOP wants to have a principled battle about fiscal waste and market distortions, this is a good one.” Ken Blackwell wrote here at Townhall that “if the mortgage crisis, student loan crisis, and the disastrous failure of green-energy firms have taught us anything, it is government has a unique ability to destroy that prosperity and ruin lives while sticking taxpayers with outrageous bills.” These sentiments are spot on.

This week, the Special Inspector General of the Troubled Asset Relief Program reported that TARP—the federal program to bail out financial institutions—has lost $60 billion so far, with $118.5 billion in loans still outstanding. That money comes out of taxpayer’s wallets, and so do Ex-Im Bank losses. Back in 1987, the Ex-Im Bank sought a $3 billion bailout for bad loans according to the Los Angeles Times. Increased loan authority would put taxpayers on the hook for even bigger losses.

Even loans that don’t go bad often wind up hurting U.S. employers and consumers. Chris Chocola of the Club for Growth notes that the Ex-Im often subsidizes foreign competitors of U.S. firms. Writing in the Richmond Times-Dispatch, he gives the example of the bank financing “foreign airlines that in turn purchase American aircraft, allowing them to compete against U.S.-based carriers. These foreign companies use our subsidy to offer lower prices since American companies cannot qualify for this corporate welfare, and they, in turn, lose business."

And the bank doesn’t restrict its dubious lending practices to foreign entities. Among its domestic “clients” are the now famously bankrupt Enron and Solyndra.

This slush fund for foreign business and domestic cronies should be terminated. That would protect taxpayers from bad investments and protect free markets from the distortion of federal favoritism.