Chicago Story: A Governor, A Prosecutor, And A Presidential Connection 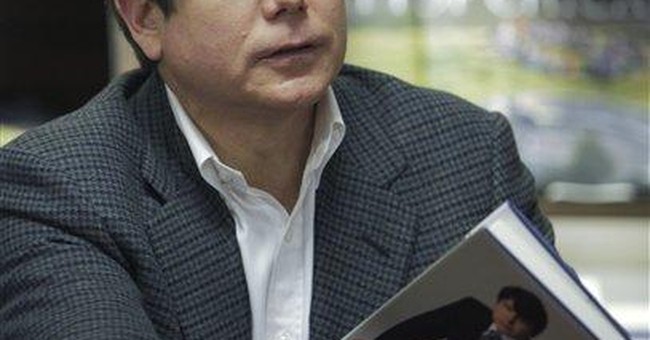 The reports seeping out of Chicago involving the sensational corruption case of ex-Illinois governor Rod Blagojevich indicate that no consensus exists among the twelve citizens charged with determining the former state executive’s fate. The jurors seem hopelessly deadlocked and, in fact, now constitute a hung jury. What will become of Rod Blagojevich? The federal government could press for a retrial, but this is unlikely. A retrial involves considerable financial expenditure, and would leave the case in limbo for years to come. The most likely result will be that ex-governor Blagojevich will walk away on most of these counts, although he might be found guilty and forced to pay a token fine on one or two charges. What seemed a slam-dunk for malfeasance in office in 2008 is now shaping up as at least a partial exoneration for a thoroughly disgraced politician.

The general public must now ask: How did this come to pass? Rod Blagojevich, dogged by corruption allegations almost from the moment he was elected Illinois governor in 2002, and under official investigation since 2006, has become a bad joke in the Prairie State, yet he may walk out of court a free man. Some will argue that a jury comprised mostly of Chicago residents would not convict Blagojevich. The greater Chicago area was the ex-governor’s natural base; he had zero credibility or popularity in downstate Illinois. Others will argue that the case against Blagojevich was rather weak. True, the prosecution had audiotapes of the Governor saying that he didn’t care about his duties as the state executive, he wanted to make money, and he would essentially “sell” a seat in the U.S. Senate to the highest bidder. Still, experienced criminal defense attorneys have noted that a governor and his henchmen talking about possibly illegal activities did not constitute the commission of criminal acts. Did the federal prosecutor, Patrick Fitzgerald, the U.S. Attorney for Northern Illinois bungle the case? An impartial observer would be hard pressed to argue otherwise.

Mr. Fitzgerald, acting against the advice of his staff of attorneys and investigators, ordered the FBI to arrest Blagojevich in December of 2008. At that time the investigation of the governor was reaching critical mass as the former Chicago political fixer and convicted felon Tony Rezko offered material assistance to the prosecution. Many Chicago political insiders began to sweat, worrying that their names would turn up in a widely cast net. Fitzgerald, in ordering the FBI to arrest Blagojevich, effectively short-circuited the investigation by moving the case to the prosecutorial phase, guaranteeing that only evidence amassed to that point would be entered into the record at a trial. A number of Chicagoland politicos breathed a heavy sigh of relief, among them a former Illinois state legislator who began a meteoric rise to fame in 2004, a man named Barack Obama who had recently been elected to the Presidency of the United States. The actions of U.S. Attorney Fitzgerald in ordering the governor’s arrest enabled Obama to wriggle out of a very uncomfortable position. Fitzgerald saw a trail heading toward the President-Elect and he closed down his investigation rather than follow the evidence to the bitter end.

At this point, we should offer a very brief overview of the case. Rod Blagojevich, a Democratic congressman from Chicago ran for, and won, the governorship of Illinois in 2002. His predecessor in office, a downstate Republican named George Ryan, had sullied himself and his Party by his corruption in office. Ryan is now serving a term in federal prison, so Illinois is a non-partisan state where political corruption is involved. Blagojevich took office in early 2003 and immediate rumors of personal corruption began to emerge regularly. The new state executive also soon wore out his welcome in certain official quarters by refusing to live in Springfield, the state capital, and continuing to reside in his plush Chicago apartment. Despite these apparent slights to downstate Illinois, Blagojevich won an easy 2006 reelection victory, rolling up unbeatable margins in Cook, Dupage, and Lake counties against an overmatched opponent.

Meanwhile the corruption charges that dogged Blagojevich for five years came to a head in 2008. Federal investigators had been untangling masses of evidence since late 2005, and a Federal Judge announced that Tony Rezko’s prison sentencing would be delayed because he was “…materially assisting in ongoing investigations.” This “ongoing investigation” was the Blagojevich case and, as noted earlier, Federal Bureau of Investigation agents arrested the Illinois governor at his home on December 9, 2008.

Throughout all of this falderal President-Elect Barack Obama stoutly maintained that he did not know Rod Blagojevich, had never met the man, and had only a vague familiarity with the man’s name. When skeptical people pointed out the implausibility of Obama, a Democratic State Senator from Chicago not knowing the Governor, who was a fellow party member and resident of the same city, Obama stuck to his story. He refused to back off when pictures surfaced of himself, Blagojevich, and Chicago Mayor William Daley standing together at a rally in 2004. Obama finally amended his story in late 2008 to admit that he had seen Blagojevich at a pro football game and exchanged a wave with the governor, but engaged in no substantial interaction.

The evidence amassed by investigators and the testimony in the trial suggests a different story. The case against Blagojevich spells out numerous discussions concerning Obama and his choice of a personal confidant, Valerie Jarrett, for the newly opened U.S. Senate seat from Illinois. Blagojevich routinely asked what Obama was willing to trade for having his preferred candidate take the seat. Blagojevich wanted a position in the cabinet, a lucrative job for his wife, or some combination of inducements as payment for appointing an Obama-certified candidate to the Senate. “Blago” laced his conversation liberally with profanities stating that “…you don’t give up something valuable for f***ing nothing”.

The actual testimony in the trial also implicates Obama in the action. In sworn testimony given on June 29th, Tom Balanoff, a key Obama ally and head of The Service Employees International Union in Chicago stated that President-Elect Obama personally directed him to approach Blagojevich and suggest that he appoint Valerie Jarrett to the open Senate seat. Balanoff said that Obama had told him that Ms. Jarrett wanted the seat and was qualified to serve. Balanoff further testified that when he made the pitch for Valerie Jarrett and her candidacy Blagojevich brushed this aside and proposed that he might appoint himself to the Senate, but that he might be open to an arrangement that would make himself the Secretary of the Department of Health and Human Services.

Naturally, the White House denies everything in these accounts. On December 23, 2008 Greg Craig, the Obama transition teams top lawyer (and former impeachment lawyer for Bill Clinton) asserted “The President-Elect had no contact or communication with Governor Blagojevich or members of his staff about the Senate seat.” Many have noted the fact that Balanoff’s sworn testimony contradicts Craig’s account but White House officials refuse to address the matter, hoping, perhaps, that it will simply go away. This is a distinct possibility, given the fact that many highly placed Administration officials, like Chief-of-Staff Rahm Emmanuel, received subpoenas and gave depositions in the case but were excused from appearing at the trial and giving sworn testimony, despite formal requests from the defense team.

What, then, have we learned about the Obama connection to the case? We know that Barack Obama, contrary to his public statements, was personally well acquainted with the now disgraced ex-governor of Illinois. We know that Obama dealt with Blagojevich concerning the open seat in the U.S. Senate, albeit through intermediaries. We know that the President’s attorney made false and misleading statements concerning his boss and his actions in the Blagojevich affair.

The swing man in the Blagojevich-Obama affair is, of course, U.S. Attorney Patrick Fitzgerald. The counselor is universally respected by his colleagues, but Fitzgerald has shown a highly attuned political side in the past, especially in the CIA leak case of the early 2000s. This time around Mr. Fitzgerald recoiled at the thought of implicating the President-Elect in corruption and graft. He moved quickly to close the investigation by ordering federal agents to arrest Blagojevich, thereby moving the case from the investigative to the prosecutorial stage. Now, many criminal defense attorneys argue, plausibly, that the prosecution did not prove their contention that Blagojevich benefited from his admittedly devious and underhanded dealings. Patrick Fitzgerald’s hasty action in arresting the governor of Illinois, thereby protecting Barack Obama, may have blown the entire case.

In summing up the Blagojevich-Obama affair we can conclude that Obama leads a charmed life. A look at his recent career shows that he has an uncanny ability to allow powerful people front for him, and, if necessary take the fall for him. In this instance, ex-governor Rod Blagojevich may walk away from the charges, but he has heavy legal bills, he is a national laughingstock, and his career is in ruins. Patrick Fitzgerald’s reputation will also suffer if he loses the biggest case of his career, particularly if a loss is tied to prosecutorial error. President Barack Obama, however, comes away unscathed. His ability to find people to front for him, a complicit media and a distracted public let Obama, once again, fall into a sewer of Chicago-style corruption, but come out smelling like a rose.