Joe Biden…"The Change We Have Been Waiting For”? 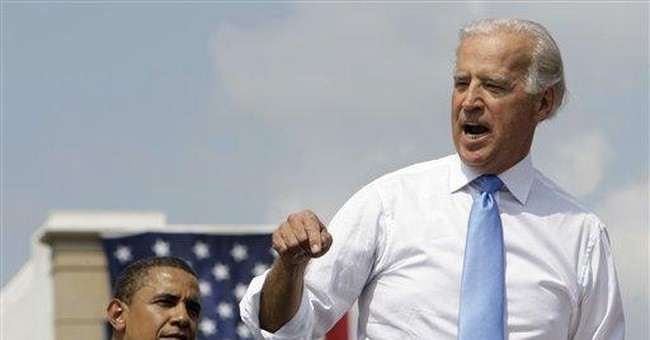 Late Friday night NBC interrupted their interminable Olympic coverage to issue a special news bulletin. Technical difficulties drowned out half of the news flash but the gist of the message turned out to be the fact that Senator Barack Obama, the presumptive Democratic Presidential nominee from Illinois , had selected a Vice-presidential running mate, Senator Joseph Biden of Delaware . The news, while not completely unexpected since Internet sources had been discussing this likelihood for at least a day, certainly merited the importance attached to it by media outlets. The Vice-Presidency undoubtedly carries more weight than the office formerly held and certain second bananas, most notably Al Gore, have developed followings based on a cult of personality that would have made Benito Mussolini blush.

Given the increased profile of the office and the significance the media attaches to the celebrity factor, it came as no surprise that Obama’s choice would dominate the news cycle. Obama, the revered figure, had teased the country for six weeks or longer about his running mate, and the nation waited on pins and needles to see who the vaunted agent of “change” would select as the figure who could step in and run the government if the worst should come to pass. The press and public speculated that Obama would make a bold choice. He might select Hillary Clinton and bind the party wounds. He could choose a Reagan Democrat like Senator James Webb of Virginia , thereby attempting to unify the country by truly reaching out to the other side. If Jim Webb proved too bitter, clinging to guns and religion, former Senator Sam Nunn of Georgia could have been employed to lend the ticket some defense and foreign policy heft. Obama could also opt for one of the promising women in his party like Kansas Governor Kathleen Sebelius or Senator Clair McKaskill from Missouri in order to satisfy the gender equity bean counters. No one knew for sure, but Obama, showing that his pitch for “change” was more than a mantra, would make a bold and decisive choice. He would prove, by his decision, that he was daring and courageous, he was a visionary of post-ideological politics! Obama thought through all of his options and gave his supporters…Joe Biden! Yes, Senator Obama confronted his first momentous decision and settled upon Senator Joe Biden, the consummate Washington insider, as his Vice-Presidential running mate.

The choice of Senator Biden as the Vice-Presidential nominee of a candidate running on the shaky platform of “change” simply staggers the imagination. Joseph Biden is sixty-five years old and has served in the U. S. Senate since first winning election in 1972. Thus, he has been in the Senate for more than half of his life, spending more than a full generation in that august body. Biden certainly should be mentioned along with Kennedy, Byrd, Young and a few others as United States Senators for life. His permanent residence in the upper legislative chamber, known as “The World’s Most Exclusive Club” clearly mocks Obama’s promise of change.

The Senator from Delaware also enjoys a cozy relationship with lobbyists and lawyers, two groups that Obama has loosely identified as part of the problem in Washington today. Biden has accepted over five million dollars in contributions, from attorneys and law firms, since 2003. He has also drawn substantial campaign support from credit card agencies, the real estate industry, and lending and financial institutions, all of which should merit careful scrutiny in this age of upheaval in the mortgage sector of the economy. Hunter Biden, the Senator’s son, is a registered Washington lobbyist and a partner in a D.C. lobbying firm who has worked the system to secure earmarks for various legislators, a practice which Senator Obama has publicly denounced.

In Senator Biden’s defense it should be noted that his own Presidential ambitions crashed in 1987, and while he briefly campaigned for the Democratic nomination last year, he was widely seen as a longshot candidate with little chance of winning the nomination. Therefore, he did not expect that he would face questions concerning his comfortable relationships with the legal/lobbyist subculture. He can expect these questions now, and in very short order.

Senator Biden is an officeholder who has served his Delaware constituency well. He is, however, a man who has earned barely a dime in the private sector, who has become, after thirty-six years in the Senate, the consummate Washington insider and is quite at ease with most of the time honored D.C. rituals many Americans find distasteful. Moreover, Biden’s senior partner running mate has condemned many of these same practices.