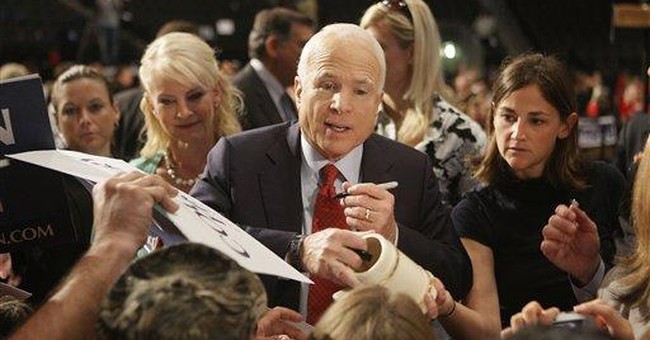 As Barack Obama and John McCain campaign into the electoral homestretch, both candidates continue battling for the “change” mantel. Following the Sarah Palin-led surge and the Republican National Convention, a Washington Post poll actually had McCain leading Obama in the quest for the change label among voters. That is good news for Republicans, but even better, Democrats seem content to concede to McCain the “fighter” label, which ultimately could prove more important.

When Barack Obama chose Senator Joe Biden of Delaware as his vice-presidential nominee, Democrats praised the selection given Biden's blue-collar toughness. Drudge Report featured a headline referring to Obama’s “Bare-Knuckle Fighter.” In his acceptance speech in Denver, Biden spoke of his mother once telling young Joey to “bloody their nose so you can walk down the street the next day” in reference to the kids who bullied Biden as a child. One could envision this sentiment having wide appeal through working-class Pennsylvania, Appalachian Ohio, and Middle America. Many also regarded Obama's nomination acceptance speech as surprisingly forceful for its direct attack on John McCain.

Clearly, the Obama camp feels compelled to combat the image of Obama as soft. The Democratic nominee has talked tough on Iran recently, saying in July that he would not take any options off the table, despite contradictory statements last year when he said

"I think it would be a profound mistake for us to use nuclear weapons in any circumstance." It should be obvious to anyone who has been listening that Obama is walking into McCain’s territory.

Whereas John McCain spent less time directly attacking Barack Obama by name or the Democratic Party in his nomination acceptance speech a couple of weeks ago, McCain unquestionably solidified himself as the fighter in this election. He used a derivation of the word “fight” 25 times in his speech, compared to just two mentions by Obama in his. Even vice-presidential nominee Sarah Palin used the word more often than Biden and Obama combined.

While conventional wisdom might hold that American’s are tired of fighting, both at home and abroad after eight years of George W. Bush, this may in fact prove incorrect. Although Americans have shown fatigue with over five years of war in Iraq, public opinion polls from the beginning of the war remind us that Americans have a greater tolerance for resorting to the military than is sometimes realized. In April of 2003, a Washington Post and ABC News poll found that 72% of Americans supported the invasion of Iraq, despite no evidence of weapons of mass destruction. A CBS poll the same month found that 60% of Americans believed the war was worth fighting even if weapons were never found. And even as the public has soured on the war efforts in Iraq, Americans have remained keenly aware of its importance and steadfastly committed to winning.

Despite what Islamofacists like bin Laden or Cambridge intellectuals like Noam Chomsky might claim, America is not a blood-thirsty predator constantly seeking the spoils of war. In fact, America is the most generous, most just, and most responsible nation in the world. However, America was borne through a military struggle, and its people realize that freedom has been threatened, and preserved, by the use of force since. Unlike much of Western Europe, which seems intent on hiding behind the United Nations and avoiding serious conflict at all costs, Americans have shown a much greater propensity for using strength to defeat enemies and promote decency.

Perhaps unlike Barack Obama, who seems to take a far more sociological view of our enemies, John McCain and the Republicans believe that we are embroiled in a war of good versus evil. This is not a new theme, nor is it a short battle.

America recently commemorated the seventh September 11th since the horrible attacks of 2001. John McCain should continue to remind people that the fight continues, and we should choose a fighter to lead us. In the end, that argument may be his biggest strength. Many Americans do not want a president who preaches to us about our failures and insufficiencies, while dressing up the sermon in rhetorical flourishes sounding of hope. They want someone who will fight for us…always. While “change” is the theme of the day, the fight for democracy, freedom and justice is the story of our nation. There is a good chance the voters are aware.