The Case for Eric Cantor and Jews to the Republican Party 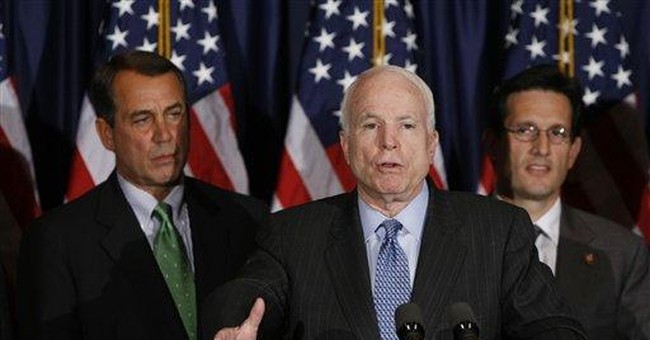 In a year that has seemed so bleak for Republicans, John McCain not only can upset Barack Obama and win the White House, he can change the voting dynamic of American Jews.  With the Democratic and Republican national conventions scheduled over the next three weeks, both presumptive nominees could announce their running mates at any moment.  Among a field of imperfect potential options, U.S. Representative Eric Cantor (R – Virginia) may be McCain's best option, and he is a good choice indeed.

Several vice-presidential contenders continue to be discussed in McCain's circles, from the obvious (Mitt Romney) to the slightly more obscure (Tim Pawlenty and Tom Ridge) to the dark horses (Sarah Palin, Bobby Jindal, and Joe Lieberman). While Romney would make a solid VP nominee, particularly given his fundraising prowess and expertise on financial affairs, he continues to be hurt by, among other things, his Mormon identity, which some evangelical Christians seem loathe to embrace. As unfair as that may be to Romney, this is a reality that McCain must confront.

Eric Cantor, however, who was largely unknown until his name recently appeared on McCain's veep short-list, could have a profound, long-lasting effect on party politics.  Cantor also satisfies more of the vice-presidential considerations than any other candidate.  He is young (45), but not inexperienced (seven years in Congress).  Simultaneously, he is somewhat anonymous and thus avoids the trapped-in-the-Beltway image that has tainted many of his longer-serving colleagues.  Cantor is from Virginia, which has become an important swing state this year that could go Democratic, especially if Obama chooses its governor, Tim Kaine, as his running mate.

Cantor has private-sector experience as a real-estate developer and has served on the House's committees on Financial Services, International Relations, and Ways and Means.  These three posts strengthen his credentials on this election's two most important issues: foreign policy and the economy.

As a practicing Jew, Cantor would boost McCain's prospects in Florida due to its large Jewish population, much of which rightfully distrusts Obama. Cantor is solidly, unquestionably conservative and earned a 100 percent rating from the American Conservative Union in 2007.  He scores very well on the major litmus tests important to the Republican “base,” including conservative views on abortion, global warming, immigration, and gun control. As a candidate, he is a prolific fundraiser and once was called a “Bush attack dog,” meaning he will not hesitate to criticize the Obama campaign while preserving John McCain’s image as dignified and presidential.  Most important, however, Cantor could bolster Republican prospects beyond just this year by attracting Jewish voters into the GOP.

Ironically, Cantor's Judaism could prove more appealing to Evangelical Christians, who represent the most ardent supporters of Israel, than to religious Jews, who are often skeptical of Jews in power. This caution has its roots in the Mishna (transcription of Jewish oral law), specifically, Ethics of the Fathers, which warns against close affiliations with government authority that sever loyalties to the Jewish community. However, religious Jews already vote overwhelmingly Republican.  It is the large swath of moderate Jews, who tend to vote Democratic, who would be most swayed by Cantor on the ticket, along with conservative Christians.  Thus, Cantor could serve the delicate, dual role of attracting both moderates and the conservative base.

Although historically, Jews have leaned heavily Democratic, the time could be ideal for a political realignment.  President Bush garnered an estimated 25 percent of the Jewish vote in 2004, a significantly higher percentage than he received in 2000, although not quite the nearly 40 percent that Ronald Reagan attracted in 1980. The Democratic Party virtually expelled its most prominent Jewish face, Senator Joe Lieberman (I-D – Connecticut), who vocally has endorsed and campaigned for McCain.  The Republican Party and self-identified conservatives maintain a far more consistently and visibly pro-Israel stance than do their Democratic and liberal counterparts.

Obama has been, at best, inconsistent on Israel.  Attempting to refute critics' claims that he harbored pro-Palestinian sympathies, Obama told a June 4 American Israeli Public Affairs Committee (AIPAC) conference that Jerusalem would remain Israel's capital.  He later backtracked and said Jerusalem's status would be open to negotiations between Israelis and Palestinians. The Republican Jewish Coalition's website notes that Obama's national campaign co-chairman and military advisor, Gen. Merrill “Tony” McPeak, seemed to identify Jewish voters when asked to name the biggest obstacles to Middle East peace.  “New York City. Miami. We have a large vote…here in favor of Israel. And no politician wants to run against it,” McPeak said.

Of course, Obama also has stated that he would meet, without preconditions, Iranian President Mahmoud Ahmadinejad, who keeps threatening to destroy Israel. In May, he called Israel “a stinking corpse…on its way to annihilation.”  The Democratic Party platform soon will call on Obama to fulfill his promise of condition-free direct diplomacy with Iran.

An ideal vice-president not only brings something to the ticket but can highlight something the opposition lacks.  Eric Cantor can do both, while potentially transforming traditional Jewish voting patterns.  A McCain-Cantor ticket could demonstrate to Jewish voters that the Republican Party, in fact, cherishes the values they embrace, including individual responsibility; education policies that benefit children, not teacher's unions; strong, unconditional support for Israel; and toughness in the War on Terror.  In a less-than-ideal year for Republicans, Eric Cantor could help ensure an ideal ending.