The Ugly End of the Duke Lacrosse Story 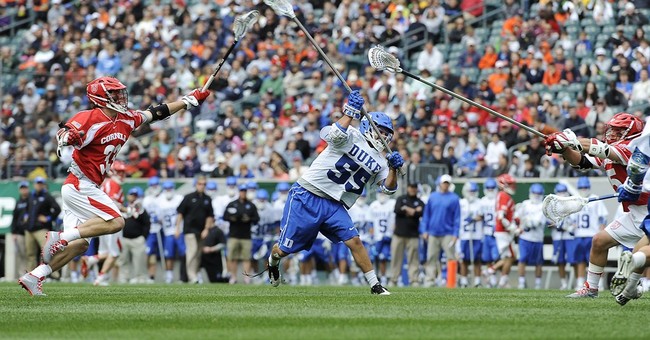 Trending
On Nov. 22, with the national media focused on the 50th anniversary of former President John F. Kennedy's death, few noticed the story of a jury in North Carolina convicting Crystal Mangum of murder in the 2011 kitchen stabbing death of her boyfriend Reginald Daye. Why should that fact fixate the national media?

On its own, it shouldn't. But in 2006 and 2007, Mangum's false charges of rape against three Duke University lacrosse players caused a national tsunami of media sensation, an angry wave of prejudiced coverage presuming the guilt of rich white college boys when being accused by an African-American stripper.

More than any other media outlet, The New York Times trumpeted Mangum's rape accusations, even after they fell apart. As other liberal media were backing away, the Times published a notorious, error-riddled 5,700-word lead story on Aug. 25, 2006, by Duff Wilson, who argued there was enough evidence against the players for Michael Nifong, the atrocious local prosecutor (who would later be jailed and disbarred), to bring the case to trial.

Within the Times, perhaps the most aggressive accuser was then-sports columnist Selena Roberts, who made a habit of comparing the accused Duke lacrosse players to drug dealers and gang members.

Roberts continued to lob charges of white privilege in her last column on the subject in 2007: "Don't mess with Duke, though. To shine a light on its integrity has been treated by the irrational mighty as a threat to white privilege. Feel free to excoriate the African-American basketball stars and football behemoths for the misdeeds of all athletes, but lay off the lacrosse pipeline to Wall Street, excuse the khaki-pants crowd of SAT wonder kids." She lamented, "some news media jackknifed as they moved from victim's advocate to angel-tinting the lacrosse team."

To Roberts, the false accuser never stopped being the victim. Roberts never wrote a retraction for her columns that relentlessly championed a false narrative. She is the Al Sharpton of sports columnists.

The coverage ended. Well, there was one small trickle of news. In December 2010, The New York Times ran a tiny wire item in the sports section about the Duke lacrosse "victim" being found guilty of "misdemeanor child abuse and damaging property. A Durham County jury convicted Crystal Mangum, 32, of contributing to child abuse or neglect, injury to personal property and resisting a public officer after a February confrontation with her live-in boyfriend."

Then, in 2011, Mangum was indicted for murdering her boyfriend. Again, it was a tiny item in the Times -- a brief at the bottom of page B-14 of the sports section, under "Lacrosse": "Crystal Mangum, who falsely accused three Duke players of raping her in 2006, was charged with murder in the death of her boyfriend."

So when Mangum was convicted of murder on Nov. 22, now would it garner serious attention? The Times ran a tiny, 98-word wire story. There were no burning columns from the successors of Roberts.

Now remember that the entire time Mangum was ruining the reputations of three young men, the media kept her identity a secret. But now that her secret of lying and even murder is out, the secret remains, at least on the media's radar screen.

There were no Duke-accuser updates on ABC, CBS, NBC, NPR, PBS, USA Today or The Washington Post.

Like Roberts, ABC legal reporter Terry Moran didn't easily let go of the blame-the-rich-whites game in the spring of 2007, writing for his ABC blog: "Perhaps the outpouring of sympathy for (the falsely arrested Duke lacrosse players) is just a bit misplaced ... As students of Duke University or other elite institutions, these young men will get on with their privileged lives ... They are very differently situated in life from, say, the young women of the Rutgers University women's basketball team."

Those women were briefly, unfairly smeared one day in a bad Don Imus joke at 6 a.m., as "nappy-headed hos." Few would have heard it if liberals hadn't flagged it. Just as liberals flagged some falsely accused lacrosse players who were only guilty of being rich and white.

On Saturday, Nov. 23, CNN offered two segments on Mangum's conviction. Defense attorney Mark Geragos offered a strong post-trial verdict: "I thought at the time that that (Duke lacrosse) prosecution was not only ill-advised but that prosecutor and we were vindicated to some degree was -- ended up being disbarred."

"Now you have a woman, and, you know, somebody had remarked to me this morning, karma is a bitch," he said. "You've got a situation where, you know, she had at least arguably a decent defense in this case, but has absolutely no credibility."

The national media also lost credibility in this Mangum mess. Their coverage at the start was outrageous, as was their suppression at the end.