Who's Dour about Virginia? 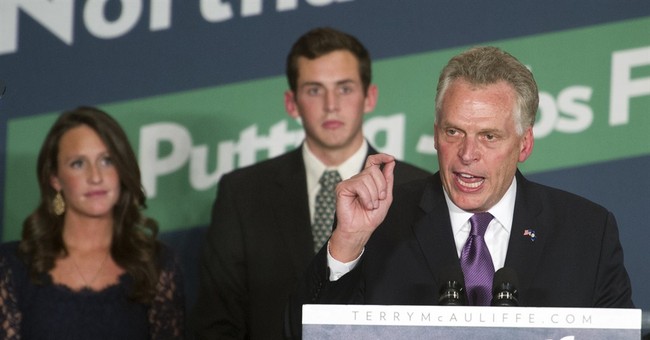 Trending
Who's Dour about Virginia?

Bob Bartley, where are you?

When Robert Bartley was in charge, The Wall Street Journal editorial page was the gold standard of conservative thought. It can still be good, sometimes quite good -- but it is no longer true north for the movement. Too many times it has delivered product that makes conservatives shake their heads in confusion, even disbelief.

Their post-election analysis on Tuesday evening was one such moment.

The editors declare that while a Democrat won in Virginia and a Republican in New Jersey, "the party that should do the most soul-searching is the GOP." Agreed.

They state that it is "embarrassing" that Ken Cuccinelli lost to Terry McAuliffe, "a carpetbagger and crony capitalist from central casting." Correctomundo.

"The defeat has many fathers," they write, "including incumbent Republican Bob McDonnell, who ... got himself into a political-gift scandal that made it hard for the GOP to run an ethics campaign again McAuliffe." Yes, and I'd go further. Even if he weren't mired in scandal, McDonnell would have been useless. As his "goodbye" present to Virginia, he delivered the single largest tax increase in state history: No one wants anything to do with him now.

If only The Wall Street Journal had stopped there, but no. "Mr. Cuccinelli's supposed friends in the tea party also stabbed him in the back by pushing the government shutdown."

Ad hominem ("supposed friends"), ad hominem ("stabbed him in the back"), untrue ("pushing the government shutdown"). That's one doozy of a butchered sentence.

But what comes next is even better. "About 30 percent of Virginia voters live in the Washington, D.C., suburbs that are packed with government employees, and the Democrat won that suburban vote by 62 percent to 33 percent according to the exit polls."

My first reaction is to ask: So what? For many years Northern Virginia has trended Democrat because of government workers. How did the shutdown affect the vote?

My second reaction is different.

You see, that's the sentence you'll read if you go on the site now. But that's not what the editors wrote Tuesday night.

"About 30 percent of Virginia voters live in the Washington, D.C., suburbs that are packed with government employees, (SET ITAL) and nearly 90 percent of voters in exit polls blamed Republicans for the shutdown (END ITAL)."

I imagine the decision to take that out came after Heritage Action blew them out of the water. In a word, that is a lie. The exit polls said no such thing. According to Fox News, exit polls showed that 48 percent blamed Republicans, 45 percent Obama -- a split.

To be sure, at the end of the new version there is the correction stating that the paper misstated the exit poll results in the first version. It follows then that more here should have been edited out, including the ad hominems about backstabbing supposed friends because they never did hurt the candidate over their government shutdown agenda, which they never held.

Then there is this. "But Mr. Cuccinelli's dour social conservatism hurt him among some voters. His positions on abortion and gay marriage are the same as Mr. McDonnell's and for that matter not much different from Mr. Christie's. Yet Mr. Cuccinelli sometimes gives the impression of being a charter member of the cast-the-first-stone coalition..."

Exactly how did Cuccinelli give that impression? It was not the candidate doing this. It was his opponents (SET ITAL) in both parties (END ITAL) doing this; the Democrats through TV commercials, and the Republicans through a nasty whisper campaign. (I challenge anyone to deny this, by the way.)

"Dour"? I would submit to you that a candidate who supports taxpayer funding of abortion for any reason at any time is the radical, and his intransigent position the dour one.

And finally: "Mr.Cuccinelli never found a strategy or language to neutralize the Democratic 'war on women' or war on immigrants charges..." Yes, the Democrats won the female vote again. Interestingly, however, and what should have caught the Journal's eye was this: Cuccinelli won (SET ITAL) married (END ITAL) women by a whopping 9 percent. There's something positive there.

On immigration it is more complicated, and it is correct to state that Democrats are scoring points with this issue. But suffice it to say that Cuccinelli did not, and conservatives should not support amnesty, and for that a conservative publication should be saluting him.