TV Has to be At Least 42 Percent Gay? 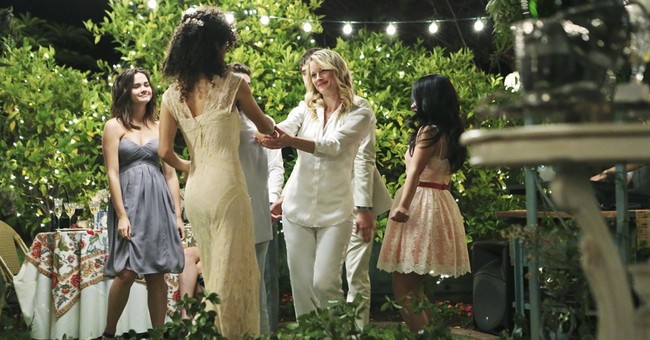 Trending
The media elites glowed as they reported a judge had forced New Jersey to become the 14th state to honor and celebrate the "gay marriage" concept. When homosexuals marry in Hoboken, the gay left will be -- should be -- thanking Hollywood.

The Gay and Lesbian Alliance Against Defamation (GLAAD) has issued a new report boasting that "TV hasn't merely reflected the changes in social attitudes; it has also had an important role in bringing them about. Time and again, it's been shown that personally knowing an LGBT person is one of the most influential factors in shifting one's views on LGBT issues, but in the absence of that, many viewers have first gotten to know us as television characters."

If network executives were honest, they'd be slamming this report. If. Haven't they routinely insisted that TV shows have zero effect on the audience? That's their constant mantra when defending sex and violence on TV. They're silent. They know exactly how much they influence.

GLAAD and The Hollywood Reporter commissioned a poll last fall that found in the past 10 years, about three times as many voters have become more supportive of "marriage equality" (31 percent) as more opposed (10 percent). When asked how television has influenced them, 27 percent said "inclusive" TV shows made them more "inclusive," while six percent were more "anti-marriage equality."

As GLAAD put it, "Telling our stories to a mass audience is an important role that television continues to play."

These cultural trend-enforcers went after the movies this summer, complaining that out of the 101 film releases by the major studios in the 2012 calendar year, "only 14 films contained characters identified as lesbian, gay or bisexual. There were no films containing transgender characters."

The silver-screen people need to catch up, they lectured: "But if the major Hollywood studios want a real barometer of how much has changed in our society and how much catching up they have to do, they need only look at what's become one of the greatest threats to their viability: television."

In the 2012-13 TV season, GLAAD found a record number of LGBT characters -- 4.4 percent, or at least double their actual percentage of the population. Fox was honored for having these characters in 42 percent of their programming hours -- although that wasn't enough for "Excellent" status, merely "Good."

There's no wonder that a Gallup poll in 2011 found that on average, American adults estimate that 25 percent of Americans are homosexual. They're getting that crazy idea from TV.

GLAAD is using that example to proselytize the movie studios: "The 'novelty' of these (TV) characters being LGBT has long since passed, and now they're simply unique personalities making up part of unique character ensembles."

That doesn't mean these guardians of inclusion aren't going to keep pressuring TV. The new gay-focused sitcoms "Partners" and "The New Normal" were canceled, alongside other shows with socially liberal agendas. To compensate, GLAAD is even bashing The History Channel for having zero gay characters.

They don't mean in the Civil War documentaries. History executives have loaded their schedule with fictional and "reality TV" shows, and GLAAD is having a tantrum. "The closest the network seemed to get was on the scripted drama 'Vikings,' which depicted one 'straight' Viking couple sexually propositioning a monk they had enslaved." They even expect Middle Ages dramas to have gay scenes or characters in 42 percent of programming hours.

They want children indoctrinated as well. GLAAD is also not shy when it comes to Teen Nick, Cartoon Network and the Disney Channel. Apparently, children also desperately need the propaganda of gay characters in 42 percent of programming hours. They're extremely happy with the liberalism of "ABC Family" and have relayed that Disney Channel executives promised GLAAD they will "introduce LGBT characters in an episode of its original series 'Good Luck Charlie' set to air in 2014, a first for the network." The first of many, they expect.

Here's the catch: Gay characters never face any real opposition to the gay agenda on these so-called "inclusive" programs. There is no measure of Orthodox religious inclusion and no real debates. The victory of the left is assumed without thinking. When a conservative character is created -- like Ellen Barkin's "Nana" in "The New Normal" -- it's a vicious cartoon, the kind that those "against defamation" folks deeply enjoy.

These people are all about tolerance and sensitivity. But if you disagree with them, they will have your head. Ask anyone in Hollywood who's pro-family.