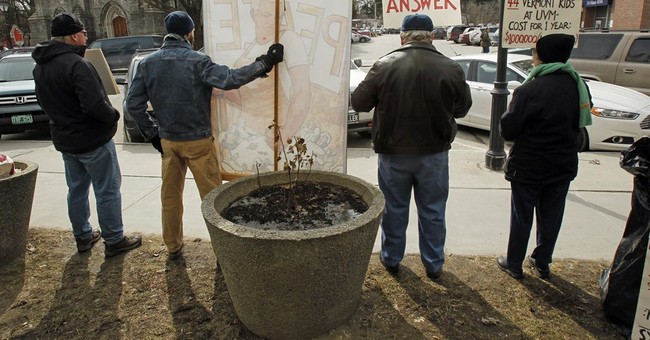 Trending
Barack Obama ran for president as the last of the red-hot pacifists, so it might have sounded preposterous to predict that after a few security briefings at the White House, President Obama would follow in the same policy footsteps of horrid warmonger George Bush, with his anti-terrorist wars and strategies.

So where is the anti-war movement now?

"What anti-war movement?" former Congressman Dennis Kucinich asked when called for comment last week. Medea Benjamin of the radical group Code Pink agreed: "The antiwar movement is a shadow of its former self under the Bush years." Cindy Sheehan quipped, "The 'anti-war left' was used by the Democratic Party. I like to call it the 'anti-Republican War' movement."

The "Wonkblog" of The Washington Post ran an article (online only, not in the newspaper) headlined, "How Obama demobilized the antiwar movement." As much as our "objective" media lamely tried to portray the peaceniks mobilizing in the streets against Team Bush as nonpartisan and non-ideological, the truth is the movement collapsed as soon as the Democrats tasted power.

Sociologists Michael Heaney and Fabio Rojas surveyed the leftist protesters for a 2011 paper and found that after Obama won, "attendance at anti-war rallies declined precipitously and financial resources available to the movement dissipated ... the antiwar movement demobilized as Democrats, who had been motivated to participate by anti-Republican sentiments, withdrew from antiwar protests when the Democratic Party achieved electoral success, if not policy success."

This is the natural order of things. It's what happens when you win. The Hollywood Women's Political Caucus was a hugely successful left-wing PAC in the late '80s, mobilized to fight the threat to civilization posed by the Reagan GOP. Shortly after Clinton's victory in '92 it, too, declared victory and disbanded. Conservative icon Midge Decter had her fun, too. She declared victory and deactivated her anti-communist group, the Committee for the Free World, after the Berlin Wall came down.

So Osama bin Laden is dead and al-Qaida doesn't have the same horrific luster. Iraq is finished and with Afghanistan, it appears to be only a matter of time. It's natural that some hard-left protest-organizing groups, like United for Peace and Justice, would collapse for lack of donations. Some, like Code Pink, have become almost invisible. Some groups, like MoveOn.org, have been willing to toss aside principle in favor of access. General Petraeus went from their General "Betray Us" to General Acceptable when Obama tapped him for Afghanistan.

This evolution applies to the press, as well. Were Bush to have made Obama's statement during that Syria press conference, all hell would have broken loose. Warmonger! No evidence! No allies! But there is no appetite now to curb Obama's sudden fixation with war. He wasn't questioned over saying he would take the step of seeking congressional approval but stated he had the power to go it alone. Incredible.

Worse, as with everything else Obama, they're soft-pedaling it. Andrea Mitchell is a delicious example of a damage-control argumentum ad absurdum.

Mitchell lectured extreme leftist Rep. Barbara Lee: "Barack Obama, as you know better than I do, was one of the leading Democratic politicians against the Iraq War. So if he says that this is different, that the evidence is there ... does that persuade you since he has always come at this from a very cautious anti-war perspective?"

War is best waged by the anti-war agitator?

George W. Bush had the polls behind him before the war, but he never had a promotional press. Obama has the media fully in his camp, but not the public. Will the subservient press demonstrate the power to turn public support in the president's favor? Or will they, as with the public, grow weary and turn on this president over his decision to pursue yet another fool's errand in the Middle East. Time will tell.

Biden Is Switching Midterm Strategies, and It's Really...Something
Townhall
You KNOW the baby formula shortage is BAD for Biden when his handy-dandy water-carriers (aka fact-checkers) show up all at once to DEFEND him
Twitchy
John Durham Faces New Challenges After Jury Selection in Sussmann Case
Redstate
Insanity Wrap: Is Elon Musk Trying to Buy Twitter — Or Humiliate It?
PJ Media