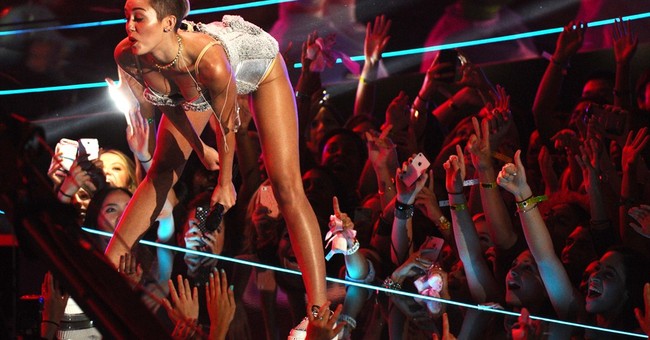 The tawdry sexual dancing of Miley Cyrus on the 2013 edition of MTV's Video Music Awards has been denounced by nearly everyone -- conservatives, liberals and libertines (who flunked it for lacking "hotness"). That theme is exhausted. Let's shift the discussion back to where it belongs: the cultural cesspool that is MTV.

Every year, MTV prepares sleazy awards show stunts like this to acquire buzz for itself. There's Madonna and Britney Spears having a long onstage kiss, Justin Timberlake and Mila Kunis grabbing each other's private parts on stage and Sacha Baron Cohen "accidentally" hanging upside down with his bare buttocks exposed right in the face of the rapper Eminem.

The music is irrelevant. What matters at these music awards is the shock.

It's not always physical. In 2009, actor Jack Black jokingly asked the "Dear Dark Lord Satan" to bless the rock-star nominees with "continued success in the music industry."

This kind of shock-jockery is the daily menu of MTV, but few care to notice. It is so easy to make a list of MTV shows that are more disgusting than a former Disney star's distasteful bump-and-grind.

1. In May, on an episode of their "reality" show "Ke$ha: My Crazy Beautiful Life," the sleazy pop singer decided to urinate into a plastic bottle in front of her friends on a car trip and take a sip. "It was really gross," this genius concluded. So was this entire program.

2. After the 2011 Video Music Awards, MTV previewed a new series with the classy title "I Just Want My Pants Back." The plot centered on a casual sex session inside a refrigerator. The lead character Jason asked his new friend, "What if you're really a sexy transsexual and later I discover, oops, you have a penis?" She replied she was "all girl" and insisted "Let's do it in your fridge!" He was wowed. "What a fantastic email this is going to make tomorrow!"

Jason later copulated with a different woman who asked him to put his finger in her rectum. When that didn't please her, she asked, "Could you try your thumb?" Later, Jason told his friends, "Her sphincter had the grip of a merchant marine." There's MTV talent for you.

3. Also in 2011 came the show "The Hard Times of R.J. Berger," in which the ongoing joke was the lead character was a teenaged nerd that was very well endowed. In an episode titled "Deadliest Crotch," R.J.'s hefty friend Miles was seduced by an attractive blond teacher. Since the teacher had a fetish for fat boys, she insisted he "eat hearty" and "have seconds" for lunch.

The apparently comic twist was the teacher gave the student pubic lice. Miles demanded that R.J. shave his pubic hair. After the two boys stare down into a camera apparently inside the pants, viewers are transported into a disgusting cartoon, wherein the two boys are now microscopic in size, floating on a boat in a sea of pubic hair with a captain screaming at them to wipe out the menacing lice. Cartoon R.J. pronounces the whole scene disgusting and then falls overboard into the diseased mess. This was canceled after two dreadful seasons.

4. In 2011, MTV also failed with the sleazy teen show "Skins," which even TV critics hated. Teenage boys plotted to get a friend to lose his virginity by exploiting a woman in a drug-induced haze. "So we go to a party and get some girl racopiously spliffed up, in a confused state, and she comes to believe, however momentarily of course, that you're attractive, and ... she bangs your brains out."

MTV boasted the actors were under 18, so MTV's parent company Viacom had to debate editing out nude scenes so they wouldn't break child pornography laws.

5. In 2007, MTV premiered the reality show "A Shot at Love with Tila Tequila," in which the show's bisexual star attempted to find "love" from a cast of both men and women. In the debut episode, one female contestant announced she was a virgin, to which Tila replied, "My prayer has been answered!" The same woman soon was marching down a runway dressed as a full-grown Girl Scout, asking the show's star: "I'm sweet and innocent. Can I interest you in my cookie?" This show seemed desperately in need of a writer's strike.

The brunt of the cultural criticism around the Video Music Awards belongs squarely on the shoulders of MTV, whose executives perpetually push the envelope of acceptable public behavior further and further into squalid deviance. One can only dread the spectacle they'll try to create next.

In front of children.