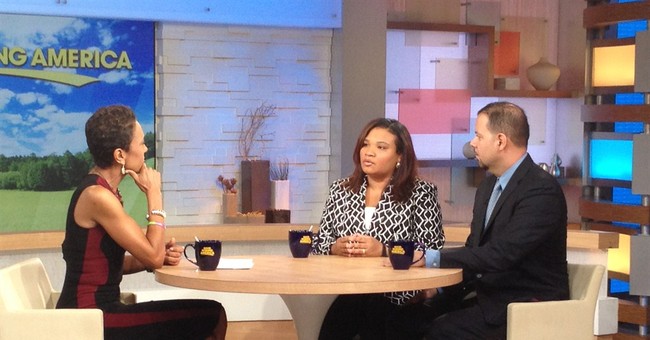 Trending
Network morning "news" shows are aimed directly at women aged 25 to 54. ABC's "Good Morning America" is routinely winning the ratings race by skipping the boring "hard news" and focusing heavily on real-life soap operas, such as the Jodi Arias murder trial or the Ariel Castro kidnapping outrage. It isn't news at all. It's infotainment.

But what really caused jaws to drop recently was ABC promoting its latest sex-drenched Sunday night soap opera to those women. Viewers saw a naked man and woman in bed, with a side breast shot and the man's hand grasping the top of the woman's thigh -- on TV at breakfast time. As usual, this eye-grabbing sex scene wasn't between spouses. That's never scandalous enough.

The new show is called "Betrayal," and it's all about a neglected wife who commits adultery. The plot twist is her new lover turns out to be a defense lawyer who's opposing her prosecutor husband in a big murder trial. "Desperate Housewives" is gone, but Sunday night's still a favorite dumping ground for sleazy TV.

Rebeca Seitz is a blogger and promoter of family-friendly entertainment. She could not believe what she saw on ABC with her young children on the morning of Aug. 8, just before 8:30.

In a blog post that quickly went viral, Seitz protested, "This wasn't primetime. This was a commercial about a primetime show airing while we all enjoy cornflakes and coffee and wish our kiddos a good morning. My kid saw that. Not because I took him to a movie wholly inappropriate for his age. Not because I quit parenting and just told him to turn on the TV at 10 p.m. and watch whatever."

She argued that ABC's bosses felt "Betrayal" wouldn't be a success due to good writing, acting, lighting or camera work. "Someone decided that what was needed to get people to actually watch 'Betrayal' was taking off the actors' clothes and having them simulate sex -- at least the Hollywood version of it."

Then it's somehow the parent's job to screen ABC commercials that display nudity with no warning.

Seitz posted a picture to Facebook, which spread the shock and outrage. Then Facebook notified her the picture had been "reported as inappropriate due to nudity" and then removed the porny screen shot.

The creator of "Betrayal," David Zabel, told the recent TV critics tour in Hollywood that he realizes it's "a challenge" to get audiences to find sympathy for two cheating spouses, but added: "They've overcome it on "Scandal" -- another ABC show, where one of the cheaters is the president of the United States. Like every other salesman of filth, Zabel blathers that he's aiming for a "cable sensibility" that's "much more sophisticated and adult."

When he aims for cable, he doesn't mean the Disney Channel. Do you ever wonder what Walt Disney would think of what happened to his company, once so beloved for entertaining ... families?

ABC keeps churning out trashy soaps that fail, from "Dirty Sexy Money" to "Good Christian Bitches" to "666 Park Avenue." One TV critic who viewed the pilot episode said, "42 minutes of 'Betrayal' felt like two years of watching very, very expensive paint dry on the wall of an apartment you could never afford to live in."

Seitz was overwhelmed by the online support she received, but she was also disappointed by the flocks of people who told her they had surrendered their remote controls and gave up on insisting Hollywood should have standards for the masses. To Seitz, that sounds like waving a white flag of surrender.

"Television is one of -- if not the -- most powerful, effective forms of media for transmitting our beliefs, our cultural norms, what we deem entertaining and encouraging as a society. I'm trying desperately to understand the merits of just removing ourselves from it," she wrote. "When we do that, we cede the territory ... and it becomes what it has become, which is what our children inherit. If we don't engage, what changes?"

We've seen the trend that begs for resistance. The executives who've ripped the Mickey Mouse ears off ABC are exactly like the rest of the Tinseltown elite. Money is the object, and stimulating the viewer with ever-darker material is the method.

They only see children as part of a 2-to-17-demographic on a chart that won't make them enough money. The serious profits are in tantalizing and titillating young to middle-age adults, and there's never a poor time to sell them glamorous immorality.