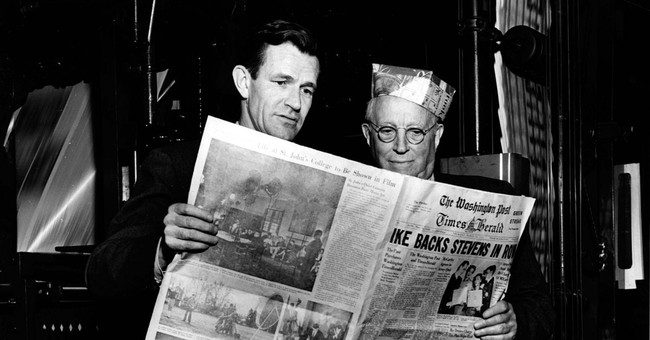 Outside the liberal media, you wonder how long Post fans can wallow in their Nixon-crumbling polyester "glory days" in the early 1970s. But nostalgia ruled as the Graham family sold the Post to Jeff Bezos, the billionaire founder of Amazon.com. "Now he is being credited as a white knight with deep pockets helping to save one of this country's great newspapers," oozed NBC reporter Tom Costello.

Perhaps the worst backslapping came inside the Post. Its media reporter, Paul Farhi, peddled rumors that The New York Times might be next on the sales block and flattered both: "One is a venerable family-owned pillar of the national media establishment. So is the other. One has a storied history of investigative reporting and a reputation for journalistic excellence. So does the other."

In the last electoral cycle, that "excellence" was defined by huge exposes claiming Mitt Romney cut another kid's hair at prep school and Rick Perry failed to put enough coats of white paint on a racist piece of rock.

Obviously, many expect (or just hope and pray) that Bezos can find a way to make newspapers profitable again. That might explain why the Post Company's stock jumped almost $25 a share. But if Bezos can't manage that, he'll get credit as a pro-journalism philanthropist. After all, the other Washington newspapers, the Times and more recently the Examiner, have been labors of love, not money.

NBC quoted Bezos saying, "The values of The Post do not need changing. The paper's duty will remain to its readers and not to the private interest of its owners."

That sounds self-refuting: The Graham family sold the paper sold due to seven straight years of financial losses, now mounting at roughly $100 million a year. New Post editor Martin Baron insisted, "No institution can spend more money than it has." (There's one exception, and Obama's running it.)

When Bezos announced the Post's "values" don't need changing, he was agreeing with the liberal media's self-image. They have to deny that journalism's vanishing profits might be caused by alienating half of your potential audience with partisan hit jobs and blatant liberal bias. It's similar to the media claiming Detroit's bankruptcy is all technological and has nothing to do with its politicians.

The Grahams sold to Bezos because they were impressed with his wealth and his digital savvy, but also because they were confident that he had all the right political values and social liberalism, as demonstrated by his $2.5 million donation for a gay-marriage referendum in Washington state. Pay no attention to anonymous company sources saying they were looking for "public-spirited" and "non-political" owners.

Ironically, they kept this sale out of the media as they negotiated throughout 2013, unlike the very public left-wing brouhaha over the Los Angeles Times possibly going to those villainous capitalists Rupert Murdoch or the Koch brothers. No one inside the liberal media elite wants to admit that Murdoch's purchase of The Wall Street Journal looks like a good thing for journalism now. Everywhere he goes, they play the Darth Vader music from "Star Wars." Jon Stewart makes grumpy faces and warns about "Murdochopoly."

But for Bezos, they're getting out the marching band for a victory lap. Post media blogger Erik Wemple said Amazon's breakout will look like a weak first act if the liberal media is saved: "Should Bezos succeed in even tweaking this sector's vicious cycle, his contributions to retailing and e-commerce may well look like modest achievements."

The first question now is whether Bezos bought the Post to be an instant power player inside D.C. (that's what D.C. assumes without blinking) or to make money. Is the Post a nostalgic plaything for Woodward and Bernstein worshipers, or is it possible he'll betray journalists and take it a more tabloidish direction, like the Huffington Post?

The Post just fired its ombudsman to tune out reader complaints of flagrant errors and hatchet jobs. Let's see if Bezos can turn that arrogant attitude around.