Obama and the Callous Kanye Culture 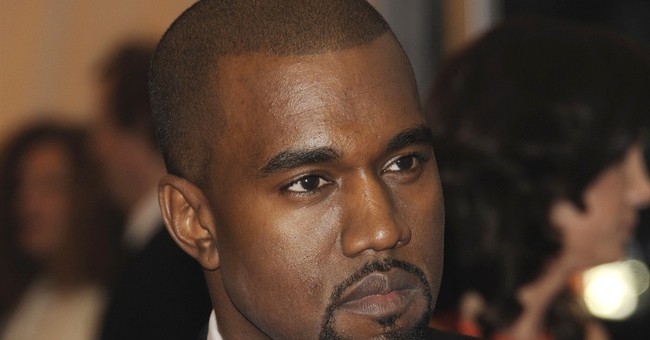 Egotistical musicians often exaggerate their political influence, none more than the nattering, narcissistic rapper Kanye West. He has compared himself in global stature to Apple founder Steve Jobs and has titled his latest album "Yeesus."

Rolling Stone magazine has posted part of a West song titled "I Am a God," where West raps that Jesus is the "Most High," but he's a "close high."

Now it's The New York Times pandering to West's colossal self-regard -- and it's downright embarrassing. Mouth-breathing Times writer/superfan Jon Caramonica stooped to telling West that "what I find probably the most moving thing that you've ever done, which is calling out President Bush at the Hurricane Katrina telethon. To me, that moment is actually the peak of putting a message in a pop format." West agreed, designating it as "a very pop moment of a lifetime or generation."

Do you remember this? Does anyone? Let me remind you of that generation-shaping moment. In the middle of an NBC telethon, as celebrities somberly asked for donations to the Red Cross, West lashed out, for no reason, and stupidly, arrogantly and rudely declared that President Bush "doesn't care about black people." He proceeded to add black people were smeared as looters and "now they've given them [police?] permission to go down and shoot us."

Lyndon LaRouche is more rational than this idiot.

Caramonica thought this burp of hate was brilliant. "Were you conscious that that's what you were doing, or was it totally just instinct?" West replied, "It was pretty bugged out. When you think about it, I was wearing, like, a Juicy Couture men's polo shirt. We weren't there, like, ready for war."

This was hardly an intellectual moment for West, although he claimed he was following through on the social conscience of his parents. "I am in the lineage of Gil Scott-Heron, great activist-type artists. But I'm also in the lineage of a Miles Davis -- you know, that liked nice things, also."

In other words, West aspires to be a limousine leftist, a race-baiting revolutionary driving a $760,000 Lamborghini. How many poor Katrina victims could he feed if he didn't have those car payments?

While The New York Times swoons all over him, the real radicals also think he's one of those "bourgeois" idiots. They prefer hard-left professor Cornel West to Kanye West. They could understand why rap stars would support Obama the first time around, but can't believe they still accept this year's "just like Bush" model.

On The Huffington Post, white University of Richmond professor D. Erik Nielson complained about "How Obama Played the Hip-Hop Community."

Nielson trashed Obama's record, including his continuing "Bush-era surveillance practices" and "the systematic criminalization of people of color."

He asked how wealthy rap stars like Jay-Z and Diddy and Ice Cube have "continued to support Obama publicly, even after the benefit of four years of hindsight? Perhaps, having constructed narratives of themselves as street-savvy entertainers, they are reluctant to admit they've been hustled by a Harvard-educated law professor who's got better game than they do."

Nielson seems unwilling to admit that gangsta-rappers don't pose in their music as Obama-style community organizers or philanthropists. They only look out for themselves. These men focus on enriching themselves with large corporate deals, not on defeating inner-city blight.

Last September, Obama (sort of) shared the stage with Jay-Z and Kanye West at the "Made In America Festival" in Philadelphia. The president appeared in a pre-recorded video to urge the assembled rap fans to vote and oozed that he loves listening to Jay-Z on his iPod. After Obama's message, West and Jay-Z finished with their hit "(N-words) in Paris." In that song, Jay-Z raps, "What's 50 grand to a motherf---er like me, can you please remind me?"

Can't you see Obama's head bobbing along to that?

Days later, Jay-Z held a $40,000-a-plate fundraiser for Obama at his 40/40 club in Manhattan, which includes a tower of champagne bottles that cost $105,000. The rapper (and the Obama-loving press corps) was very quiet about this shindig. On the same day, Obama appeared on the Letterman show on CBS and lectured Mitt Romney that "if you want to be president, you've got to work for everybody, not just for some," because people want a president who's "not writing off a big chunk of the country."

Who precisely is insensitive to black-on-black violence, black dropouts and stubbornly high-black unemployment? But this is the kind of shameless world Obama and his mediating minions make, and we're supposed to shut up and live with it.