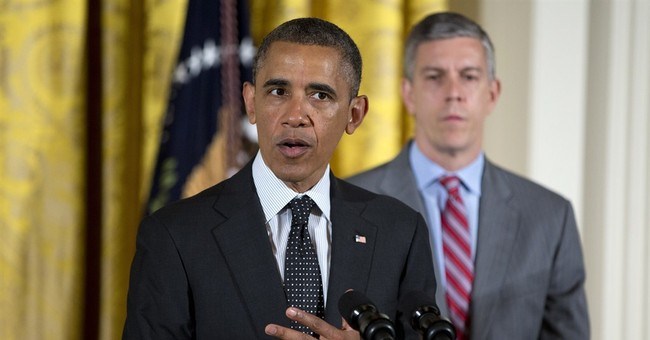 The national media have evinced some outrage over the Obama Justice Department's aggressive persecution of investigative journalists. But not enough. It is more important to help President Hope and Change overcome the legacy-strangling notion of an "atmosphere of scandal" than to investigate a scandal that is strangling their very profession.

On Sunday's "Face the Nation," New York Times editor Jill Abramson claimed to be very concerned about the leak probe, but proclaimed of all these scandals that, "I'm just not sure, you know, they come together and create, you know -- quote, unquote -- 'an atmosphere of scandal.'"

Even worse was the Associated Press, which posted a story calling the government rifling through its reporters' phone records an "alleged scandal."

The Times drew attention by refusing to attend a meeting on the leak probes with Attorney General Eric Holder since it was declared off the record. But when some journalists met with Holder and were allowed to report some of the details, the Times buried it inside the paper. This meant the front page could stick to earth-shattering scoops like "A New Step in Wrestling With the Bra."

Washington Post columnist Marc Thiessen, a former Bush speechwriter, has asked an excellent question of journalists and pundits who insist the investigation of James Rosen of Fox News is appropriate because of the potential damage he is doing to national security. How aggressively has the Obama Justice Department pursued White House leaks to pro-Obama media outlets that put out stories in mid-2012 about what a terrific terrorist-battling president he was?

Thiessen wondered if Holder and Co. could handle a probe that "could lead directly to members of the president's inner circle." Last June, Holder assigned two U.S. attorneys to investigate: one on the AP, and one on the Times. Don't hold your breath waiting to find an Obama White House official getting the Scooter Libby treatment.

Speaking of Libby, when the Bush Justice Department decided in the fall of 2003 to investigate who leaked the name of CIA employee Valerie Plame, the media were much less reluctant to wallow in that "atmosphere of scandal." ABC, CBS and NBC all led with that story for days at a time. When Holder announced his AP/New York Times probes after the evening newscasts on Friday, June 9, 2012, the networks picked at the news over the weekend like a cold TV dinner and dropped it by Monday.

Leading up to that announcement, Republicans had focused on several promotional Times pieces. On May 29, 2012, a Times story by reporters Jo Becker and Scott Shane focused on how the president personally composed a "kill list" of suspected terrorists to be eliminated in drone attacks. Then on June 1, the Times published a story by David Sanger revealing how Obama personally ordered a cyber attack on Iran's nuclear program using a computer virus called Stuxnet. Sanger also wrote an Obama-boosting book titled "Confront and Conceal: Obama's Secret Wars and Surprising Use of American Power." It professed to tell how Obama would "preserve America's influence with a lighter, defter touch."

Rich Noyes of the Media Research Center reported that between the two articles, there are 52 sources cited, and 92 percent of the source identifications are of past or present Obama officials. Looking at just the descriptions used by the three Times reporters, nobody should believe that these stories were not carefully developed and facilitated by the top men on President Obama's national security team.

There were others. On June 19, 2012, The Washington Post revealed that, in addition to Stuxnet, the "United States and Israel jointly developed a sophisticated computer virus nicknamed Flame that collected intelligence in preparation for cyber-sabotage aimed at slowing Iran's ability to develop a nuclear weapon." And on June 13, a Post article revealed the existence of a network of special-operation air bases in Africa used to spy on al-Qaida. But there is no U.S. Attorney investigating leaks to The Washington Post.

The Post has tried to defend itself in news stories as too complex to investigate: "Several of the recent disclosures, however, resulted from deeply reported projects. Such articles tend to have diffuse sourcing, making it hard to isolate who first disclosed the essence of what later becomes an article."

It's exactly this heads-I-win-tails-you-lose media logic that causes most Americans to pick the AP-Rosen leak probes as the least outrageous of the Obama scandals. Reporters use anonymous Democrat sources or thinly veiled "senior administration officials" to promote their partisan narrative of choice, whether it was Bush the Bumbling, Yet Frightening Tyrant or Obama, Master of the Lighter, Defter Touch.