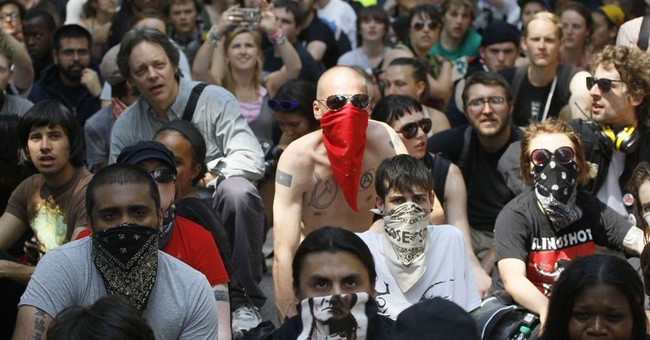 Usually movie makers strive to stay ahead of the cultural curve. It makes them "visionaries" who are "cutting edge" because they "push the envelope." Two years ago, "Occupy Wall Street" was the hot fad, stoking the usual left-wing outrage at bankers and the finance industry. They were the ones portrayed as greed-heads never held accountable for their crimes. Businessmen just twirl their mustaches and laugh evil laughs.

But that was two years ago. Time for something fresh -- and edgy. A new movie suggests that movement was for sissies. It's time for someone to start a new campaign: Assassinate Wall Street.

Trashy German director Uwe Boll -- best known for adapting video games into movies, like Postal -- has made a movie called Assault on Wall Street, starring Dominic Purcell, who played the innocent Death Row prisoner on the Fox drama Prison Break. This time, he's a mass murderer...but also the hero. It's like a mashup of a criminal John Rambo going after Gordon Gekko.

The plot is as stilted as you can make it. Jim is an ex-military man living a blue-collar life in New York, but his charming and lovely wife has cancer, and the insurance company won't pay for her experimental gene-therapy shots. So Jim puts all his money on the stock market...and then the crash of 2008 arrives. The financiers get bailed out. Jim doesn't. The wife gets depressed and commits suicide.

Apparently, it's time for a lot of people to die in a rampage.

As one film critic put it, "The good guys punch a clock. The bad guys wear ties, painting an extremely one-dimensional portrait of the conflict. ...Jim has no flaws, and his blind faith in a disturbing system of risk is all the screenplay needs to issue him a license to kill."

The speeches made by the financial villains are pure garbage. After Jim has slaughtered hundreds to get to Stancroft, the man running his failed fund, the film stoops to stilted dialogue. First, Jim accuses. "The problem with guys like you is that you're always bragging, so when the rest of the world is suffering, you're making sure that every magazine in the country knows all about your triumphs."

Then Stancroft defines for Jim what capitalism supposedly is. "It's the bankers and the owners and the advisers who get rich. And it's the little people who buy their stock that always lose in the end, people like you. That's capitalism."

One trip to this movie's Facebook page is all you need to know that some people think it's deeply satisfying to watch a real class war. It's a "great and inspirational film. It's a PAYDAY for you and I!" Another wrote: "I loved the movie from the beginning to the end, in real life, the corrupt have more luck."

Or try this Bill Moyers type: "This movie nailed it perfectly of what every American felt during the robbery by the banks, and the government's commitment to protecting their corporations so they can keep getting those reelection funds and so called legal bribery via lobbyist groups."

The movie's 90-second trailer also features that Good vs. Evil pitch. The words on screen begin with "Wall Street...where greed is good ... and they make the rules." After Jim loses all his money, he says, "This is not a game to me. This is my life." A bank blows up, followed by the words "Fight the Power."

We see a SWAT team deploying and Jim aiming his gun out skyscraper windows. Then come the words "Fight the Greed."

Jim lectures Stancroft: "You cooked the books to get your bonuses. ... Why should I let you live?" Then they show a banker being shot as he clinks wine glasses with his wife on his elaborate back porch. As Jim crosses off magazine pictures of crooked financiers, and we see a man being run down by a car, the final caption arrives: "Fight for Justice."

But behind this madness is Uwe Boll, who financed his first 15 years of moviemaking by exploiting a German tax break that allowed the very rich to get a tax write-off by supporting movie production, even terrible movies like Boll's. (The break was repealed in 2005.) Boll would be better cast as a villain of his own "capitalist" fiction if he really believed any of this hate-filled, left-wing bilge.