Ted Cruz Has All the Right Enemies 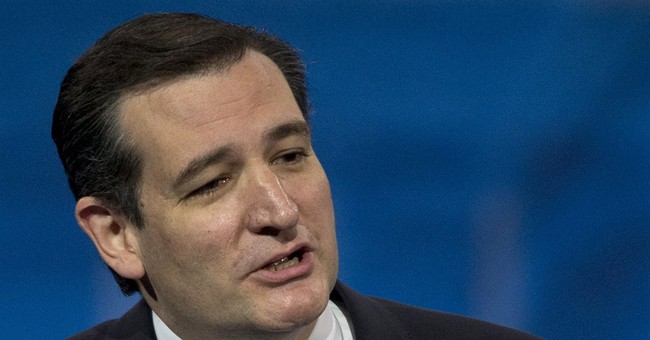 The Washington Post offered a splashy profile of freshman Sen. Ted Cruz on Tuesday, and the most surprising thing about it was a lack of venom. The reporter described "the self-assured, nonstop talker who won national debate championships as an undergraduate at Princeton."

Cruz "honed his reputation early in his career as a dazzling Supreme Court advocate" and now "has bashed into the national conversation," most notably in attacking establishment Republicans, who've called him and other young Senate conservatives "wacko birds."

This story, however, wasn't as surprising as James Carville's declaration on ABC's "This Week." He was typically blunt -- but in a wholly unexpected direction. "I think he is the most talented and fearless Republican politician I've seen in the last 30 years."

Carville accurately described the conservative view: "'If we only got someone who was articulate and was for what we were for, we would win elections. And we get these John McCains and these Mitt Romneys and these squishy guys that can't do anything.'" Carville added: "Well, there's one thing this guy is not -- he ain't squishy, not in the least."

The more typical take from the Left came from the same program, when former Gov. Bill Richardson insisted that the words Hispanic and conservatives cannot go together in the same sentence: "He's anti-immigration. Almost every Hispanic in the country wants to see immigration reform.

Senate Majority Leader Harry Reid is so tired of Cruz and his objections already that he has denounced him to his face as a "schoolyard bully." (To which Cruz shot back: "I wasn't aware we were in a schoolyard.")

Few people try to paint Ted Cruz as a lightweight -- except the lightweights. Haters at the Daily Kos blog have risibly jeered he couldn't be considered as qualified to be "pool boy." Chris Matthews bashed Cruz as "another one of these well-educated right wingers like Pat Robertson. It's like they flush out their high educations when they get out of school for political purposes."

David Letterman recently named Cruz as a "Stooge of the Night" for failing to vote Letterman's way on gun control. But the segment was so listless and unfunny it almost made you miss that other gray-haired liberal guy with the glasses -- remember that guy? -- who did that "Worst Person in the World" segment.

It's clear that Cruz's intelligence is marking him for media harassment. Former Newsweek Washington bureau chief Evan Thomas spoke for the journalistic masses: "You need to watch this guy, because there are a lot of demagogues out there, but not that many who are that smart. He is really, really smart, and that makes him potentially dangerous."

Liberals are far more comfortable with Republican leaders they can define as dimwits -- like that Harvard MBA, George W. Bush. They champion liberal politicians with mediocre college grades like Al Gore with honorifics, such as "The Thinking Man's Thinking Man." Ted Cruz upsets their liberals-are-smarter apple cart.

The media's Republicans In Name Only aren't fans, either. The New York Times columnist David Brooks -- the pseudo-conservative who fraudulently purports to represent the Right on both PBS and NPR -- declared that when you mention Cruz to other senators, "you just get titanic oceans of eye-rolling, because you're a freshman, you don't go in and take over hearings." Cruz is supposed to go along to get along, learn his place, "grow in office" and join the establishment. Brooks strangely added: "It doesn't help that he has a face that looks a little like Joe McCarthy actually."

Liberals have repeatedly linked Cruz to McCarthy after the New Yorker savaged Cruz because he said in a 2010 speech to a conservative crowd that Barack Obama "would have made a perfect president of Harvard Law School" because "there were fewer declared Republicans in the faculty when we were there than communists! There was one Republican. But there were 12 who would say they were Marxists."

The New Yorker's star witness against Cruz was "Republican" Harvard Law professor Charles Fried, who claimed he was one of four "out" Republicans on staff. Fried is an Obama supporter who recently donated $250 to elect liberal Senator Elizabeth Warren.

Despite the media harassment, Ted Cruz is kicking tail and taking names. The Washington Post notes that his reaction to all the criticism can be summed up as "Lovin' it!" He is one member of Congress I'd like every other Republican to emulate. How crazy could that make the media elite?