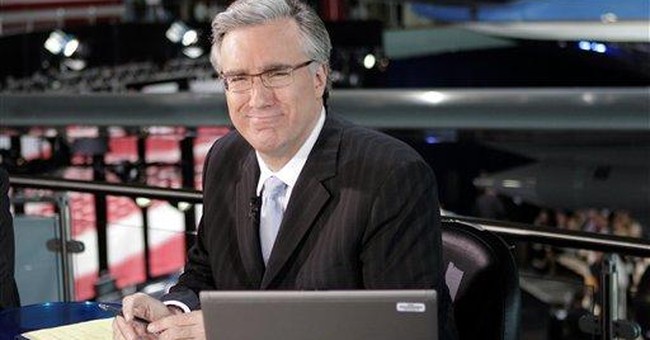 Trending
Our transparently feminist media are currently cranking their hyperbole machines in their War on Limbaugh. They are reporting -- chortling, really -- that Republicans have a huge problem with women voters. The Washington Post breathlessly reports that their poll found Democrats won by 25 points on "Cares more about issues that are especially important to women."

But there's an enormous, deliberate, daily oversight by most of these pro-Obama journalists. They are choosing to ignore the vicious way liberal talk show hosts and comedians talk about women -- and not just conservative women -- on a regular basis. Many of them come from NBC and MSNBC.

Take Ed Schultz in 2009 trashing Sen. Joe Lieberman's wife for lobbying for health insurers: "Does the word 'whore' apply?" Try to find a single media outlet that considered that newsworthy.

Schultz can also dismiss grown women as "little girls." In September 2010, he sneered "There's a couple of gals who've been riding the wave of crazy that's been sweeping the nation's right-wingers: Shooter's little girl, Liz Cheney, has been hitting the lecture circuit, parroting daddy's fear-mongering rhetoric." Liz Cheney holds a law degree from the University of Chicago and served as a deputy assistant secretary of state. That's more of a hotshot resume than Big Ed will ever have. No one in the "objective" media made that a national outrage.

Yes, Schultz did get a week off from MSNBC for calling Laura Ingraham a "slut" and a "talk slut" on his radio show. But try to find any of the networks reporting on that or suggesting it would hurt Democrats with women voters. It came and went without the networks talking about it. But the same media outlets wage war on Limbaugh with the assumption that he is somehow the de facto chairman of the Republican National Committee.

On MSNBC in October 2010, Keith Olbermann unloaded a bag of hatred on blogger and columnist Michelle Malkin because he believed she threatened a woman who posted a video of school kids singing their praises to President Barack Obama. "She received death threats and hate-filled voicemails all thanks to the total mindless, morally bankrupt, knee-jerk fascistic hatred, without with Michelle Malkin would just be a big mashed-up bag of meat with lipstick on it." Who in the news media flagged that attack and tried to make it issue? No one.

Before he disappeared from MSNBC to join Dan Rather on one of those tiny unwatched channels, Olbermann also trashed the conservative author S.E. Cupp on Twitter in April 2011 as someone who should have been aborted: "On so many levels she's a perfect demonstration of the necessity of the work Planned Parenthood does." Anyone remember the media firestorm that followed? Nope.

Sometimes, this kind of attack actually airs on the NBC News mother ship. During a June 2009 discussion on NBC's "Today" show about Sarah Palin's role in the GOP, comedian Chuck Nice cracked, "I've got to say, she is very much like herpes, she's not going away." The network's legal analyst Dan Abrams, said admiringly, "That's the advantage of being Chuck Nice. You can say that and there's no repercussions." There are no repercussions when women who are not liberal enough are thoroughly insulted for their lack of enlightenment.

Michele Bachmann's presidential campaign was a joke to MSNBC. Joe Scarborough said so: "Michele Bachmann is a joke...Her candidacy is a joke." Joe has favored Jon Huntsman because, "He can speak in complete sentences. One sentence actually relates to the previous sentence."

If the woman is a liberal -- an apparently full-blooded authentic female -- then NBC and MSNBC are more likely to bend. Liberals who wanted Hillary Clinton to beat Barack Obama in 2008 actually campaigned against Chris Matthews as in need of a sexism watch for suggesting she was "witchy" and had a voice like "fingernails on a blackboard." David Shuster got suspended for suggesting Hillary was "pimping out" her daughter Chelsea on the campaign trail.

Let's not countenance those media elites sermonizing that Republicans have a monopoly on running down women. Every journalist should face the reality that networks such as NBC and MSNBC have waged their own rhetorical War on Women -- and one that is far nastier, far more insulting than Rush Limbaugh has ever said in his entire life.