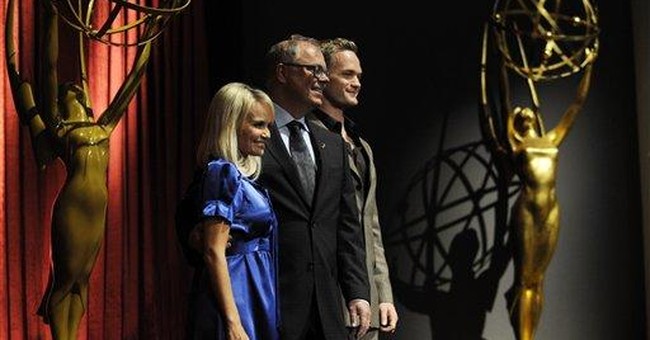 At the same time Washington was ablaze with outrage at the idea that Rush Limbaugh insulted a woman as a "slut," ABC premiered a new Sunday night show called "GCB" -- shortened from "Good Christian Bitches." Limbaugh apologized. ABC displays no such contrition. They insulted only those Christians. In the midst of this trashy debut, ABC promoted a new sitcom coming in April titled "Don't Trust The B---- in Apartment 23."

ABC advertised the debut of "GCB" with a photo of actress Kristin Chenoweth in a choir robe cut way above the knee, as if such a thing exists. "Love One Another," it read, dripping in sarcasm. That's Hollywood's definition of a "good Christian."

Chenoweth plays Charlene Cockburn, the wealthy "queen bitch," who routinely quotes Bible verses with venom on the show. When her realtor friend won't help her ruin the lead character, Amanda, Charlene threatens her business: "Read Job 1:21, the Lord giveth and the Lord taketh away." She launches wicked plots while the auto shop puts a "John 3:16" decal on her car. She tells her fellow plotters, "God hates failure."

Time TV critic James Poniewozik protested, "I have a hard time believing that anyone will see themselves insulted by GCB: Its target is not Christians but phonies." Not so. There are certainly Christian hypocrites that can make for great grist in entertainment. But this show offers the viewing public no authentic Christians at all.

We can't say this is surprising. Nor are we surprised by the shamelessly dishonest spin of ABC. Channing Dungey, a senior vice president of drama development for the Disney-owned network, said she always knew this show was a "home run" from the beginning. The title was provocative, yes, but "treating religion and Christianity with respect is very important to everyone involved."

Then there are the stars.

Chenoweth told the home team at ABCNews.com that "The Bible tells us that we're not supposed to judge, and people shouldn't judge before seeing the show ... I'm a Christian; I think that's pretty well known, and I would never do anything that I think crossed the line."

The entire show crosses the line. It tries to cross the line. It begins with a California man driving frantically for the Mexican border with his mistress and a mountain of stolen cash. But the mistress decides to perform a sex act on him while he drives, leading to a fatal car crash. That's what spurs the lead character, Amanda -- now a widow -- to return to Dallas to live with her wealthy mother, played by Annie Potts.

Potts is second only to Chenoweth in spitting out cynical conservative "Christian" one-liners. She tells her daughter California is inferior to Texas because "we've got the same weather without the liberals." She also tells her daughter if she needs rehab to avoid the Baptists ("folding chairs") and try the Episcopalians ("upholstered, with canapes.") She says to "cut the commie crap" when Amanda tries to keep her children from going to church. At episode's end, she declares, "I feel confident the good Lord would like me to have a new fur coat. God often speaks to me through Christian Dior."

Anyone wasting a whole hour waiting for one good character would place their hopes on widowed Amanda, played by the actress Leslie Bibb. For most of the show, she's renouncing how badly she behaved in high school and wants a job to pay for her own house. But when she can't find a job, we get a ridiculous 180-degree turn. She starts working at a Hooters-aping restaurant called "Boobylicious," which she discovers is owned by Chenoweth's husband.

Ignore whether the "fun fact" is true -- multiple cities claim to have the most churches per capita. Also, Portland claims the title of most strip clubs. This line neatly summarizes ABC's take on churchy Christians. Anywhere they gather in great numbers, their badly hidden sins and perversions naturally trail closely behind. Christians, the audience at home should believe, are nothing but phonies. No other faith in America gets lined up for this kind of bashing.

As anyone could have predicted, ABC is clearly pitching "GCB" as a replacement for the dying soap "Desperate Housewives," merely adding the Texas- Christian angle to make the plots extra-scandalous. Hollywood seems to think everyone is a selfish and cynical hypocrite. But not everyone lives in a gaudy piranha bowl like they do in Tinseltown.

'Unhinged': The Zoom Call That Caused a California Teacher To Get Suspended
Townhall
Joe Scarborough warns House Dem about what's going to happen in 2022 if they don't dial down the crazy
Twitchy
Watch: Antifa Goes Wild in the Nation's Capital, but the Reaction Is Decidedly Different
Redstate
Joe Biden a No-Show to Greet Japanese PM—and the Preview of a President Harris Is Awful
PJ Media