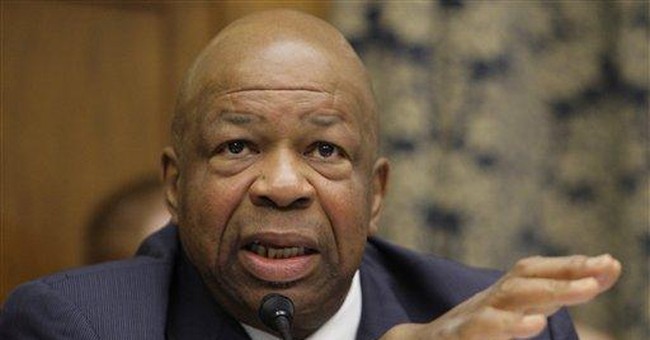 Almost from the moment Barack Obama declared he would run for president in 2007, our enraptured media elite has been accusing anyone who would stand in Obama's way with racism. The question was never whether Obama was ready to govern the country, but whether the country was ready for the historic awesomeness of Obama.

Pity the NAACP. We now have a black president, and they must convince (racist) America that there still exists the need for a national association to advance "colored people" in our society. How to do it? Identify and condemn as "racists" anyone or any group opposed to Obama.

Apparently, you cannot sincerely oppose a crushing tax burden, a useless "stimulus" bill, ObamaCare or any other element of his socialist agenda without being tagged as a bigot.

In case there was any doubt that the NAACP was carrying water for the White House political machine, Michelle Obama appeared before the NAACP convention and insisted there was still persistent racism in America, and the group's founders would "urge us to increase our intensity" -- to fight for President Obama.

The merger is so obvious, they could now be called the NAA-DNC.

Now the NAACP has found its mojo. It is slandering the tea party as "racist." In an article on CNN.com headlined "Why we passed our Tea Party resolution," NAACP chief Benjamin Jealous smeared the entire movement: "The avowed racist David Duke notes that thousands of Tea Party activists have urged him to run for president. When the Tea Party marches by, Duke thinks it's his fiesta." Since when did the NAACP -- or anyone else, for that matter -- give a hoot what Duke thinks of anything?

On its own website, the NAACP continues to rehash all those unproven allegations that "respected members of the Congressional Black Caucus reported that racial epithets were hurled at them as they passed by a Washington, DC health care protest." But let's stop calling them "unproven allegations." Let's call them what they are: lies. There is no video evidence that this ever occurred, but the NAACP doesn't care about the evidence in its kangaroo court. They even repeated that "Representative Emanuel Cleaver was spat upon during the incident." In the real world, Cleaver quickly walked away from his own story when video footage proved it wasn't true.

The NAACP's video recounting the "racism" of the tea party had plenty of objectionable signs suggesting Obama was a fascist and "It's 1939 Germany all over again." Someone needs to research the meaning of the word "racism." It gets better. The NAACP-endorsed video of purportedly racist signs even includes two shots of Confederate flags and "hateful" messages like "We Need a Christian President" and the sitcom catch phrase "What You Talking About, Willis?" A poster imposing Obama's face with a Mr. T Mohawk hairdo next to the words "Gimme Yo Change" may be odd, but it's not racist. It sure sounds like there weren't many racist signs at tea party rallies if that's all they could muster.

The bigger problem for the NAACP is that it has its very own racists. Andrew Breitbart's Big Government website revealed video of a NAACP banquet where U.S. Department of Agriculture appointee Shirley Sherrod talked about how she didn't want to help a white farmer because he should be helped by "his own kind." The contempt in her voice, in her face, and in the audience's laughter is unmistakable.

So where are all those news outlets that dutifully covered the NAACP's attacks on the tea party now? The network evening news and morning news shows avoided this racist video entirely on the first day.

Nevertheless, the cable news networks picked it up, and within hours, Sherrod had resigned from the Agriculture Department. Sherrod was clearly furious that her racist remarks were exposed. CNN analyst Roland Martin asserted that Sherrod had to go because with a political appointment, remarks like this ruin the perception that Sherrod would be fair in distributing government help. Sherrod screamed right back at him that he was "clearly from a different world" than the deeply racist world she lived in.

The bottom line is not only that Sherrod needed to go, but that the TV elite must stop ignoring this and stop pretending that black racism and discriminatory attitudes do not exist. If Obama's election was supposed to heal our race relations, then the media should put this controversy back on his desk and press him to address it.