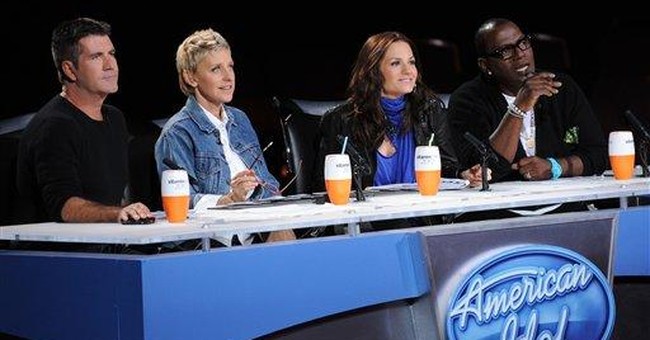 Fox is having its usual smash with "American Idol," with this season's latest offering beating the Winter Olympics in the ratings. Paula Abdul walked off in a money dispute, Ellen DeGeneres is unexpectedly flat, and the show overall is starting to sag, but it's still just about the best thing on TV. Now there's a buzz about the best judge, Simon Cowell, leaving after this season.

Cowell is constantly booed and attacked as the nasty judge, the one who crushes young singers' dreams with his patented cutting remarks. It's also true that he is painfully honest.

Almost every "Idol" watcher looks forward to hearing Cowell offer those blunt and honest opinions every bit as much -- or even more than -- the actual performances. The other night, he responded to boos after one stinging analysis by shooting back at the audience, "I'm only saying what you're thinking." That's instantly a classic line, and very true.

It's common now to hear viewers suggest they might just stop watching the show once Cowell is gone, that the quality of the judging just will not be the same. That is definitely true if one believes the rumors circulating about the sewer where Fox is fishing for Simon Cowell replacements.

First, news reports surfaced that Fox was considering the has-been satellite radio shock jock Howard Stern to be a judge. "Yeah, I would do that show for $100 million," he said on his XM/Sirius radio program. "I can't imagine anyone else but me replacing him. ... How else are they going to make that show work?"

This Stern idea would go over like a lead balloon with parents who like "Idol" as family entertainment.

A few weeks ago, Stern (age 55) wondered out loud which Disney teen favorite would provide better oral sex: Miley Cyrus (age 17) or Taylor Swift (20). Stern and his friend "Pittsburgh Pete" marveled over Cyrus' "natural" breasts. The comments spilled out on a YouTube video, but Stern supporters got it yanked.

Before his satellite show, his over-the-air show had lowlights like this one. "Have you ever had sex with an animal?" Stern wondered. "Don't knock it. I was sodomized by (the sock puppet) Lamb Chop."

And Fox had "no comment" about the prospect of hiring this man.

There are more fish flapping around at the bottom of this barrel. The scurrilous gossip blogger Perez Hilton -- who's echoed Stern by calling himself "Queen of All Media" -- begged for the job on MTV News. "Basically, I'm shamelessly looking for work. I'm available and I'm cheap."

Hilton is best known as the beauty-contest judge who ruined Carrie Prejean's chances at the Miss USA pageant by demanding she endorse gay marriage as the price of the crown. "She lost, not because she doesn't believe in gay marriage, Miss California lost because she's a dumb (B-word), okay?" The next day, Hilton issued a fake apology: "I was thinking the c-word and I didn't say it."

Hilton prides himself on being a "dangerous" figure of controversy. "I'm dangerous because I have no censor button and I speak the truth. And people are afraid of the truth." This is a rather ridiculous claim for a gossip who loves to draw vile sexual objects around the faces and crotches of celebrities on his blog. He drew a penis on a photo of Prejean holding a microphone.

He recently boasted of his newest blog obsession -- a large, fat, white man exposing himself in women's clothing: "(Wo)Man, an amazing wannabe tranny, who enjoys riding his banana seat around Beverly Hills with his banana out!"

Simon Cowell has that endearing kind of "meanness," the kind that comes with a wink. Howard Stern and Perez Hilton have persistently demonstrated that their nastiness is real and unmitigated by any notion of decency. If Fox wants to take an ax to the golden goose of "American Idol," putting either of these men in front of millions of families as judges on this program would be just the place to start.