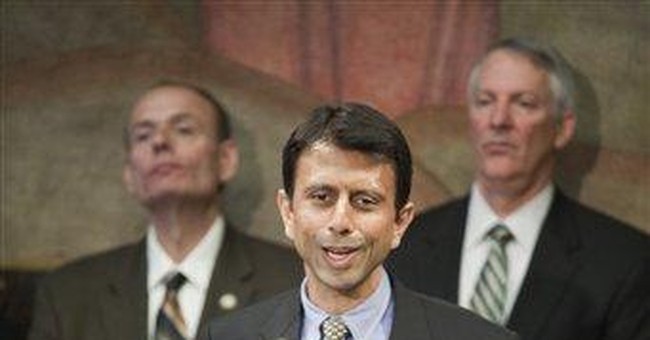 As Gov. Bobby Jindal began to offer a Republican response, it became apparent that he would be no match with Barack Obama in the soaring-oratory department. The Republicans really should have tried a gimmick instead. Perhaps Jindal could have simply walked on and said, "Today, the president held what he called a fiscal responsibility summit." He could afford a wide smile at that point, knowing his audience had erupted in laughter.

Honestly, now: Are we quite ready finally to declare the Era of Obama As Fiscally Conservative is over? Last year, Republicans warned that Barack Obama was ultraliberal -- a socialist, in fact -- but the media handlers typically presented this as a conservative smear. Instead, they painted Obama as an aspiring moderate-Republican deficit reducer. Take New York Times economics writer David Leonhardt last August: "Obama's aides optimistically insist he will reduce it [the deficit], thanks to his tax increases on the affluent and his plan to wind down the Iraq war. Relative to McCain, whose promised spending cuts are extremely vague, Obama does indeed look like a fiscal conservative."

How ridiculous does that sound now? John McCain probably would have been a moderate Republican president. But the idea that President Obama would turn out to be a stronger fiscal conservative than McCain should inspire a pink-faced laughing fit at the preposterousness of The New York Times.

Now that Obama's emphatic ultraliberalism is the elephant in the room, and liberals are cheering the reversal of everything Ronald Reagan tried to accomplish economically, the media still don't want to call it liberal. Instead, it's a pollster's list of positive adjectives: bold, ambitious, audacious and even breathtaking.

Here's how Charles Babington of the Associated Press began his analysis: "Breathtaking in its scope and ambition, President Barack Obama's agenda for the economy, health care and energy now goes to a Congress unaccustomed to resolving knotty issues and buffeted by powerful interests that oppose parts of his plan." Obama is the giant with breathtaking ambition, while members of Congress are mere mortals unaccustomed to accomplishment. Obama's agenda is not described as liberal. Instead, it's a plan "to undo major elements of Ronald Reagan's conservative movement."

His AP colleague Liz Sidoti echoed the meaningless chatter: "Barack Obama is embracing the worst economic conditions in a generation as an opportunity to advance an audacious agenda that, if successful, could reshape the country for decades to come."

The wire service Agence France-Presse found the president bristling with action: "Obama also highlighted his audacious $3.55-trillion budget plan for 2010, which bristles with economic reforms and spending on healthcare, climate change and education in a bid to end America's worst economic crisis since the 1930s."

Then there was The Washington Post, the industry leader in budget salesmanship. In a front-page story, editor Karen DeYoung oozed Obama's withdrawal plan from Iraq came "just a day after he transformed the domestic political landscape with a breathtakingly bold budget plan." Two pages later, reporter Alec MacGillis somehow left out a cheerleader's purse full of exclamation points in a story on Vice President Biden's middle-class task force: "Commentators left and right have reacted with awe to the ambition and transformative potential of President Obama's economic blueprint."

Commentators on the right reacted with awe? Only at the shameless boosterism of the leg-tingling Obama press corps.

Later came a front-page Post story by Philip Rucker, which began, "President Obama's budget is so ambitious, with vast new spending on health care, energy independence, and services for veterans, that experts say he will need to hire tens of thousands of government workers to realize his goals." The Heritage Foundation suggests it means a (SET ITAL) quarter of a million new bureaucrats (END ITAL) for the federal establishment.

As an adjective, "ambitious" is meant to be a positive word. But George Bush's toppling of Saddam Hussein was "ambitious," and the media didn't applaud its scope. In fact, they paraded the liberals around arguing the Iraq war was unsustainably swelling the deficit. The late Tim Russert pressed Bush in February of 2004: "How, why, as a fiscal conservative as you like to call yourself, would you allow a $500-billion deficit and this kind of deficit disaster?"

Today, a $500-billion deficit would sound like progress. Obama's budget aspires to reduce the projected 2009 deficit of $1.75 trillion by more than two-thirds, to $533 billion, by the end of his first term -- which, if successful, would make it worse than the worst performance by President Bush.

It should be laughable for the White House to promote a "fiscal responsibility summit" days after they shoved through a $787-billion "stimulus" bill through Congress. But the gooey flood of positive adjectives from the press demonstrates that they are not government watchdogs. They're "breathtakingly bold" Obama enablers. The honesty deficit in our press just grows, and grows.