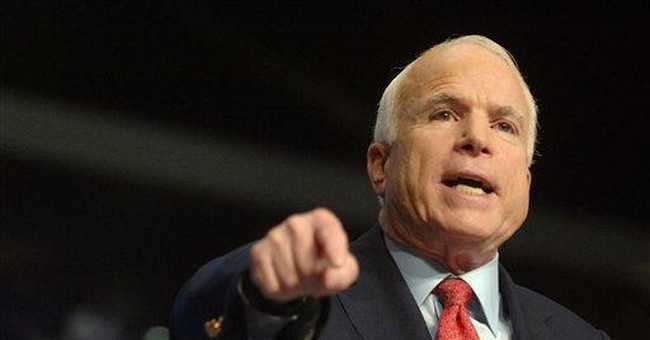 The election of Barack Obama was certainly historic, and the great attraction of that historic moment led to more history: an Obama-smitten news media that completely avoided their responsibility to test the nominee with hard questions. It made the gooey 1992 Clinton campaign look like a fistfight by comparison.

Obama faced none of the withering scrutiny applied to even the Republican vice presidential candidate. Instead, he was treated to a nearly constant string of encomiums and tributes to his transformational candidacy, while nearly every possible pitfall of political embarrassment or inconvenience has been omitted or dismissed.

The investigative resources of the networks -- who combed over Wasilla, Alaska, looking for earmarks and pregnancy tests -- showed a complete disinterest in traveling to Hawaii or the South Side of Chicago to cast a skeptical eye on any part of Obama's own preferred campaign narrative.

The big question now: If the media couldn't scrutinize the man before he was elected, why would they feel the drive to do so afterward? They won't. They worked for his election. They will now work for his administration. Past is prologue.

Take the last few Obama fawn-a-thons before the election as examples of things to come. Just one week after NBC's Brian Williams put up his dukes with John McCain and Sarah Palin, demanding to know if they would keep the pledge to avoid the anti-American harangues of Obama's longtime minister Jeremiah Wright, he had Obama on the set. The contrast was crystal clear as he asked Obama about how the poor man can't walk down the street in Honolulu mourning the approaching death of his grandmother.

"According to the press pool traveling with you, you asked to just take a walk and be alone," he oozed sympathetically. "Guess it's part of the contract you make when you run in such an extended campaign, but, the human in you, and the husband and father and grandson, must want to just bust out sometimes, or disappear, if you can't go for a walk like that?"

CBS anchor Katie Couric, last seen ripping into Palin, also used her last pre-election interview to ask about Obama's personal feelings, about whether he was a "nervous wreck" about the vote, and "If things go your way on Tuesday and you become this nation's first African-American president, what will that mean to you personally?"

Couric was tough during that interview -- but on the Republicans. She focused Obama on Republicans daring to press the Reverend Wright issue: "The Pennsylvania Republican Party is starting to run an ad in that state which features your former minister, Reverend Jeremiah Wright, saying quote, 'God damn America.' Do you think they would have run that ad without the approval of the McCain campaign?"

Even in the last days of this race, saying "God damn America" was far less reprehensible to the media than replaying it.

Both anchors thought they were being tough by asking the drape-measuring question regarding how Democrats might overreach if they hold all the levers of power in Washington, but both phrased it in a tone which said, "Please reassure voters that this is not a real cause for concern." Williams asked for "assurance" for the American people, and Couric wanted Obama to "assuage" public fears.

The burden of scrutinizing and questioning the new Democratic ruling machine in Washington is already being shrugged off by the Obama press. Once again, it's going to fall on Fox News Channel and alternative media outlets from radio to the Internet to try and hold Obama accountable. No wonder the Democrats are making noise about crushing anti-Obama dissent on the airwaves with a revised version of the old "Fairness Doctrine."

In the primary elections, it became clear when it was over that Obama's win of just one-tenth of a percentage point of the 35 million votes cast that the media's pro-Obama bias created that narrow margin of victory. The general election result wasn't that close, and the punishing circumstances of vigorous Bush hatred and the collapse of economic confidence possibly were just too much for the GOP nominee to overcome.

But try and imagine how different this campaign would have looked if the media's momentum manufacturers favored McCain with all the unashamed ardor and aggression that they brought in support of Obama. Deep down, the media agree with Evan Thomas that their bias can add five or 10 points to a Democrat's vote total, and they eagerly demonstrated that they were ready to shred their own credibility as allegedly objective referees to achieve that victorious result.