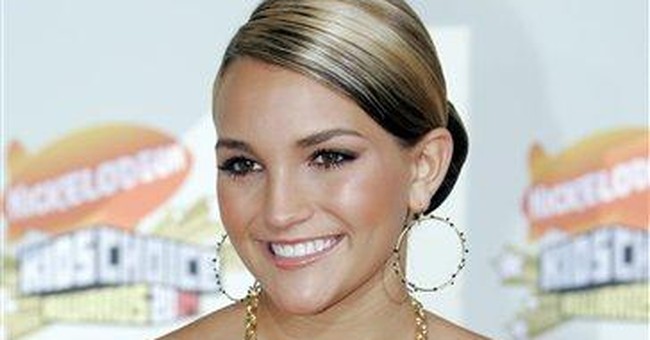 For America's celebrity-watching media, 2007 was the Year of Spears, about which we should breathe a sigh of relief that Western civilization survived. The year began with increasingly erratic Britney Spears popping in and out of rehab stints. Then she shaved her head in the spring, a move that screamed that the pop star's moves were more crazy than calculated by publicists. The year ended with the news that Britney's 16-year-old sister Jamie Lynn Spears, a star of the children's channel Nickelodeon, was pregnant.

Had the youngest Spears sister been cast as a tawdry teenage tramp on "Desperate Housewives," her real-world behavior would be seen as less scandalous. But Jamie Lynn Spears has been a fairly wholesome star on Nickelodeon since she joined the kiddie sketch-comedy show "All That" at the tender age of 11. She's currently the cool title character of the show "Zoey 101," set at a boarding school, a show watched by millions of grade-schoolers. So much for role models.

At the center of this vortex is the mother, Lynne Spears, who had her publishing contract "delayed indefinitely" for a book on parenting celebrity children, now that it's painfully apparent she doesn't know diddly about parenting celebrity children. The Spears family and their long trail of tabloid embarrassments make them some of 2007's biggest losers. Let's review some other cultural winners and losers from the year just elapsed.

Losers: Barry Bonds and every other professional baseball player caught cheating with steroids, human growth hormone and other doping methods. Most baseball fans will forever put a huge asterisk on Bonds breaking the career home run record of Henry Aaron, and this is correct. Bonds "broke" the record in a new way. He took Aaron's record and smashed its integrity like it was a priceless stolen vase.

Winners: The wider world of Major League Baseball, for finally publicly acknowledging the doping scandal that is ruining the national pastime. Add to this "winners" slot those modern superstars of baseball who never succumbed to the temptation of using artificial enhancements.

Losers: Jim Belushi and the makers of the ABC sitcom "According to Jim," for a story plot taking us literally into the toilet, with Belushi defecating out his wedding ring (complete with a clank) while his wife and other relatives hid in the bathtub behind the shower curtain. But not before his sister-in-law unloaded an "earthy" story about how "last week, I was up on the roof throwing water balloons I filled with my own urine."

Winners: Rep. Bobby Rush, for organizing a congressional hearing on the socially harmful impact of gangsta rap. Add to this slot the rapper Master P, who apologized for making gangsta rap and now says he doesn't want even his own children to listen to his work in that genre.

Losers: The shock jocks Opie and Anthony, for hosting a character named "Homeless Charlie," who made jokes on their satellite radio show about the violent rape of Secretary of State Condoleezza Rice. They continued to laugh as "Charlie" sickly imagined punching Rice in the face and raping Laura Bush "to death." Opie and Anthony then suggested he add Queen Elizabeth to his list of victims. The regrettable "ho" comment Don Imus threw at the Rutgers women's basketball team paled in comparison to this disgusting set of gags. These two are still on the air.

Winners: Walden Media, which placed more well-made family-friendly movies in the cineplexes in 2007, from "Bridge to Terabithia" to the brand-new, critically acclaimed "The Water Horse: Legend of the Deep."

Losers: The filmmakers of "Hounddog," for casting 12-year-old actress Dakota Fanning ("The Cat in the Hat") in a five-minute rape scene. The movie was screened at Robert Redford's Sundance film festival. While child-actor advocates vehemently protested, young Fanning insisted people see this spectacle and be "touched" when they "see the truth" of the movie's theme of loneliness on screen. The New York Times attacked critics who protested the exploitation of Fanning: "She's growing up. Get used to it."

Winners: Christmas cartoons that still score highly in the ratings on the major networks. Even new Christmas cartoons, like the more modern, ironic take of "Shrek the Halls," were ratings victories for ABC. But it's especially heartening that millions of Americans never get tired of scenes from "A Charlie Brown Christmas," with Linus reading the nativity story and the kids singing "Hark! The Herald Angels Sing," despite the gnashing teeth of people who hate the outpouring of any Christmas spirit.