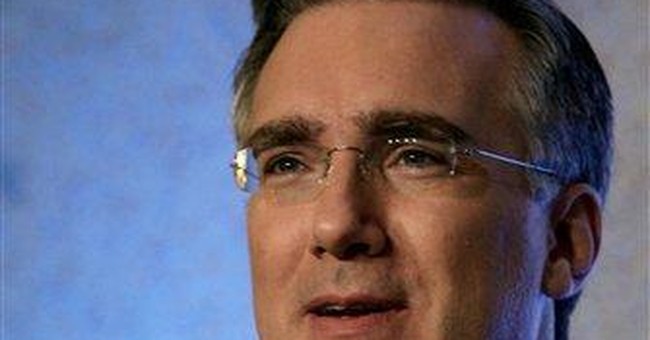 The end of 2007 doesn't seem half as depressing to the conservative faithful as it was in the beginning. Democrats captured the Congress, sure. But now it's their approval ratings that are in the toilet, and worse still, their rabid leftist base has turned on them for not being rabidly leftist enough. The presidential front-runners are no longer inevitable, not even Hillary Clinton's buy-one-get-one-free ticket. The economy is fairly strong, regardless of the pessimistic media coverage. We've had another year without America being successfully attacked by terrorists. The surge is working.

All this good news is driving the left nuts, and nowhere is this more evident than in the national media, which are making no attempt to shake off their collective gloom-and-doom tone. As the good news began emanating from Iraq this fall, the McClatchy News Service, lauded by media leftists like Bill Moyers as having the smart reporters who always thought the Iraq War was a fight without a point, ran this headline:

"As Violence Falls in Iraq, Cemetery Workers Feel the Pinch."

The story underneath was datelined "Najaf, Iraq." Reporters Jay Price and Qasim Zein explained how "business isn't good" for Shi'ite gravediggers: "A drop in violence around Iraq has cut burials in the huge Wadi-al-Salam cemetery here by at least one-third in the past six months, and that's cut the pay of thousands of workers who make their living digging graves, washing corpses or selling burial shrouds." In other words, when the bad news turns good, we at McClatchy will spin it as bad news all over again.

That quote won Quote of the Year in the Media Research Center's Best Notable Quotables of 2007, the annual awards for the year's most outrageous media pronouncements.

That emblematic headline and story narrowly beat out the year's greatest absurdity from MSNBC's Keith Olbermann -- which by itself speaks volumes. In an interview with Playboy magazine, Olbermann claimed Fox News is more "dangerous" than al-Qaeda. Give it 30 seconds of thought. On one side, al-Qaeda slaughtered 3,000 Americans on 9/11. On the other side, Fox News, well, they're dangerous because some of their pundits are rude to liberal Democrats?

Here's Olbermann's actual outpouring of idiocy: "Al-Qaeda really hurt us, but not as much as Rupert Murdoch has hurt us, particularly in the case of Fox News. Fox News is worse than al-Qaeda, worse for our society. It's as dangerous as the Ku Klux Klan ever was." This is not an outburst that erupted on TV or the radio. He sat down with Playboy and spelled this out for transcription and editing. He did not add, "Just kidding! Hey, did someone spike my coffee?"

Speaking of wacky comparisons between Americans and murderous tyrants, a man named Peter Mehlman, a former Washington Post sports reporters and "Seinfeld" script writer, took to the leftist Huffington Post blog to argue that Adolf Hitler was morally superior to President Bush. He said the president came into office by rejecting any notion of the public good, seeking only the good of his rich friends. By contrast, "You could argue that even the world's fascist dictators at least meant well. They honestly thought (they) were doing good things for their countries by suppressing blacks/eliminating Jews/eradicating free enterprise/repressing individual thought/killing off rivals/invading neighbors, et cetera."

On HBO, Bill Maher was upset that his friend Arianna Huffington removed commenters on that blog of hers who were lamenting that an attempt on Vice President Cheney's life in Afghanistan was foiled. "I'm just saying that if he did die, other people, more people, would live. That's a fact."

Left-wing lunacy was pretty common in 2007. Rosie O'Donnell talked her way off ABC's "The View" by spewing "655,000 Iraqi civilians are dead. Who are the terrorists?" Rosie had company on that set. Her co-host Joy Behar seriously claimed that Democratic Sen. Tim Johnson's brain hemorrhage could be a Republican conspiracy: "Is there such a thing as a man-made stroke? ... I know what this party is capable of."

But at least there were still Democrats who made the media elite's hearts pitter-patter with delight. MSNBC's Chris Matthews stood out for hailing Barack Obama since he "sounds like Bobby Kennedy. It sounds like the '60s at its absolute best." After watching the funeral of Coretta Scott King, Matthews was even more over the moon at Bill Clinton's performance: "There are times when he sounds like Jesus in the temple." CBS morning anchor Harry Smith was so eager to press Al Gore into running for president that he held a "Gore for President" button in front of Gore's jacket after an interview and waxed, "Save that in a freeze frame." The elections in 2008 might look like a toss-up, but there remains absolutely no doubt which corner of the boxing ring the media elite have chosen.