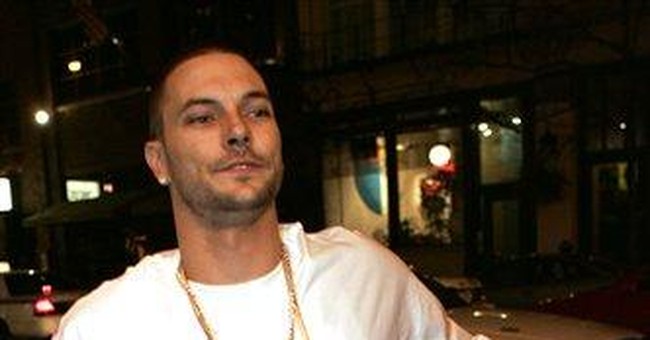 On Sept. 25, the House Subcommittee on Commerce, Trade and Consumer Protection, chaired by Bobby Rush, D-Ill., held a very unique hearing, focusing on the way the culture is being soured by the makers of sexist and racially charged rap music. Inspired by the furor over fired radio host Don Imus and his "ho" talk, the hearing was titled "From Imus to Industry: The Business of Stereotypes and Degrading Images."

That's a great title. For years now, record companies have made untold millions of dollars spreading a message glorifying the thug life, preaching greed and lust, and portraying women as nothing more than pornographic mannequins. From the debate that emerged on Capitol Hill, it's very easy to find the winners and the losers.

Winner: Bobby Rush. The congressman could have knuckled under from pressure by the anything-goes Old Guard of gangsta rap, but instead he boldly put his prestige where his heart is. He said this music of violence and degradation has ''reduced too many of our youngsters to automatons, those who don't recognize life, those who don't value life.''

He was unequivocal. "There is a problem -- a deep-seated, deeply rooted problem in our country," he said. "The paycheck is not an excuse for being part of the problem."

Loser: Michael Eric Dyson. The professor and Bill Cosby-hating author has become America's leading excuse-maker for irresponsible thug music. He blamed America, that never-draining cesspool of racism, for whatever problem exists. "America is built upon degrading images of black men and women, so any discussion of misogyny or homophobia or sexism has got to dig deep into America, including Congress and corporate and religious institutions."

Rush was not accepting that ridiculous excuse. He understands black rage against injustice in America, but in no way does it justify thuggery. He said: "I still have rage, but how do I channel it? Am I going to spew out counterproductively? Or do I accept a higher responsibility to take my rage and do something to improve the community?"

Winner: Master P. The former gangsta-rapper (his real name is Percy Miller) came to Congress and apologized for his musical transgressions. The angry music of his past, he said, came from seeing relatives and friends shot and killed. But he said now he doesn't even want his own children to listen to his music, "so if I can do anything to change this, I'm going to take a stand and do that." He also apologized to women for his music. "I was honestly wrong."

Later on NPR, he explained that listening to other gangsta-rappers "inspired" his own violent lyrics, like Ice-T boasting, "I am a nightmare stalking, psychopath walking." He said that song "put me in the mood when I was in the ghetto just to continuously make music like that." It was inspiring that he mustered the fortitude to confess before Congress.

Loser: David Banner. This rapper with the "Incredible Hulk" stage name (real name: Levell Crump) lived up to his rage-spewing image. He blamed everyone else for his own disgusting lyrics. "Hip-hop is sick because America is sick," he said. "Change the situation in my neighborhood, and maybe I'll get better."

But of course Crump doesn't really want to get better or do better. He wants to continue trotting out the usual poet-of-the-streets bilge: "Rap music is the voice of the underbelly of America. In most cases, America wants to hide the negative that it does to its people. Hip hop is the voice, and how dare America not give us the opportunity to be heard!"

Loser: the music-selling conglomerates. Corporate officials sitting before Congress were unafraid to stand up for lyrics extolling profanity, criminality and sexism. Asked if explicit lyrics by rapper 50 Cent constituted free speech, Doug Morris of Universal Music proclaimed: "Yes. It is not my place in life to tell him what to say."

Warner Music boss Edgar Bronfman said tasteless language ''is in the eye of the beholder.'' (Tell that to Don Imus.) And Phillippe Dauman, the president of Viacom (think MTV and BET), extolled the scummy street poetry: "We have a responsibility to speak authentically to our viewers." Viacom should be authentically rejected by consumers.

Winner: the music-buying public. In a poll of black Americans by The Associated Press and AOL-Black Voices last year, 50 percent of respondents said hip-hop was a negative force in American society. Due to a growing feeling that the gangsta rappers have grown far too negative, rap sales slid a whopping 21 percent from 2005 to 2006, and for the first time in 12 years no rap album was among the top 10 sellers of the year. If thug music is a sickness, the public seems to be getting immunized.