Where Are the Admirable Athletes? 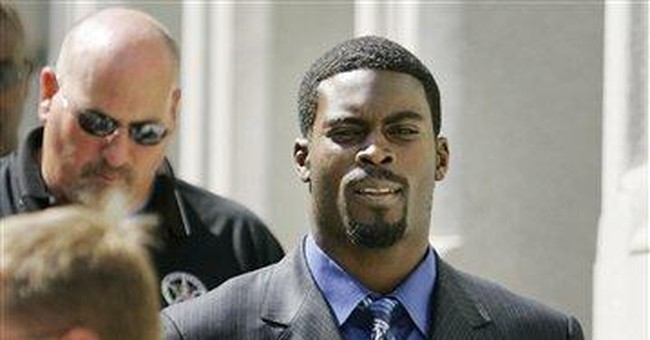 Michael Vick has done something no politician in Washington ever accomplished. The star quarterback of the Atlanta Falcons has united nearly everyone against him, indicted for being at the center of a gruesome spectacle of dog-fighting and gambling.

Federal investigators found 17 dog carcasses on Vick's property in Virginia. According to the federal complaint, the fights at the house happened in the wee hours of the morning and lasted several hours, usually until one dog died or surrendered. Sometimes, at the end of the fight, the report says, the losing dog was strangled, hanged, shot or electrocuted.

Paris Hilton's behavior may be disgraceful -- Vick is a national disgrace. Vick is Public Enemy No. 1 in the world of entertainment.

But Vick is only part of a virtual flood of bad news from the sporting world.

We should be cheering as we prepare for Barry Bonds to break Henry Aaron's record of 755 home runs in a career, but we can't. Bonds is followed by a consistent cloud of steroid-use allegations and the definite possibility of a federal indictment for perjury and tax evasion. Numerous other baseball stars have been accused of, or have admitted to, cheating with a variety of different performance-enhancing drugs. It doesn't help their cases that they somehow manage to get bigger, stronger and faster as they advance in age.

It's not just baseball. At the British Open, legendary golfer Gary Player charged there was steroid use in pro golf. The annual Tour de France is drowning in suspensions of bicyclists charged with cheating, even including illegal blood transfusions, or "blood doping." The situation's so bad that ESPN Radio recently aired a joke newscast about steroids ruining the game of professional darts.

This week's sports news also included allegations that basketball referee Tim Donaghy was betting on games he was officiating, even possibly consorting with organized crime.

The man to watch is newly minted NFL commissioner Roger Goodell. He began his new job by announcing he would suspend football players (without pay) who have had repeated scrapes with the law. He was true to his word. First, Goodell kicked defensive back "Pac-Man" Jones out for the season, and then he booted receiver Chris Henry out for half a season.

But when it comes to the Celebrity Meter, these men are nobodies next to Vick. A huge star as the first overall draft pick out of Virginia Tech in 2001, he was considered to be potentially the greatest quarterback in football. That matters not to Goodell, who has already told Vick not to show up for training camp, and with a trial expected early next year and the heinous news of what was found on Vick's property, it's an easy bet he'll be sitting out the year.

Wouldn't it be wonderful if others in positions of authority joined Goodell?

Legendary basketball star Charles Barkley made waves several years ago when he denounced the concept of sports figures as role models for youngsters. But whether they should or shouldn't be, they are, and it's high time those who control the world of sports -- the owners and the commissioners -- stopped pandering to pampered prima donnas and turned their backs on them, instead.

The same holds true for the sportscasters. When a youngster steps into the virtual ocean of sports channels today, he is smothered by news reports focusing on the latest intersection with scandal and criminal investigations. The thrill of the games and athletic feats themselves are secondary, sometimes only a blur. When it comes to dance-club degenerates starring in the tabloids like Dennis Rodman in his heyday, the sports media should treat them in the same manner in which they once dealt with streakers: stop covering them. If it's a criminal matter, then it should be covered -- and denounced if bad deeds are uncovered.

Baltimore Orioles president Andy MacPhail recently addressed the bad taste in the public's mouth with the Baltimore Sun. "I think if my kids were younger, I would try to remind them that what's getting all the attention is the exceptions," he said. "There are a lot of athletes out there who you would be proud to have marry your daughter or your sister." But with the flood of sports scandal news, they seem like the rule, not the exception.

It's time for the sports industry to shape up.