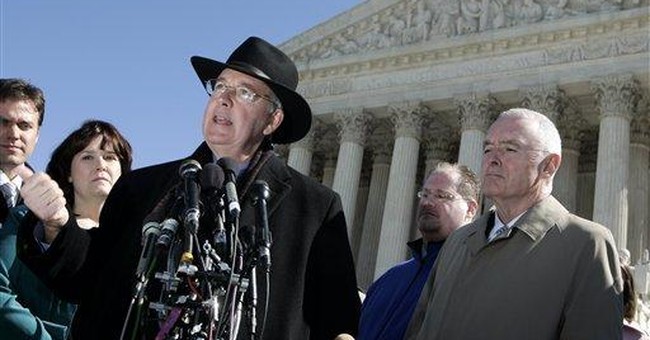 Now that the legal analysts are done assessing the judicial ramifications of the Supreme Court case of an Alaskan prankster named Joseph Frederick, one thing must be said. It is incorrect to honor Frederick as the hero of a "landmark" student free-speech case. He is more correctly described as one of the silliest plaintiffs ever to be heard at the Supreme Court.

The "speech" at issue in this case was the infamous 14-foot-long "BONG HITS 4 JESUS" banner, flown as a prank outside Juneau-Douglas High School as the official Olympic torch ceremoniously passed through the capital city of Alaska en route to the 2002 winter games in Salt Lake City. When Frederick refused to put the banner down, the principal confiscated it. Frederick was briefly suspended from school, and the superintendent explained that any common-sense interpretation would conclude the banner promoted smoking marijuana. It wasn't political, he said, but a "fairly silly message promoting illegal drug usage."

Frederick himself insisted it was "nonsense." Other than tweaking the principal, with whom he had a running feud, his main reason for acting up was a typical excuse for playing the fool: He wanted his nonsense to get him on television.

It sounds like Frederick wanted to recreate a cartoonish scene from "Porky's" designed to embarrass stuffy school authority figures. But you have to feel for those authorities, who found themselves mired in five and a half years of time-consuming and costly litigation from a child with an obvious lack of any sense of proportion. First, he caused the trouble, and when the usual (mild) discipline arrived, he refused to accept it, causing in effect a "landmark" litigation tantrum -- aided by the American Civil Liberties Union. The case of Captain Bong Hits even darkened the door of the highest court in the land.

The ACLU was content to defend the pro-drug message, and certainly it was comfortable with the mocking notion that Jesus Christ could be a stock character in a Cheech and Chong film. (Had Frederick's nonsense banner championed bong hits for Mohammad or bong hits for al-Qaida, would the ACLU have left this plaintiff to soak in his own stupidity?)

This wasn't the only lawsuit filed by the Frederick family. It became a habit. Frederick next sued the Juneau Police Department for alleged harassment after the banner incident and received a settlement from the city government. His father worked for the company that insured the school district, so he sued after claiming he was demoted and then fired for not pressuring his son to drop his lawsuit. A jury awarded him a settlement of nearly $200,000. In oral arguments, Chief Justice John Roberts boldly dismissed Frederick's claims about free speech. "This is a case about money," Roberts shot back.

Frederick also drew police attention when he was arrested during his college days in Texas for distributing marijuana. His pot-touting banner wasn't all a pose.

Free speech is important, and political speech is the most important of all. But students should strive, and be taught to argue persuasively, not aspire to a random five-second act of idiocy. One of the legal precedents in the case was Tinker v. Des Moines School District, a 1969 case where students demanded the right to wear black armbands in silent opposition to the Vietnam War. Say what you will about the issue, but at least in that case students actually had a serious cause, and not just a bad case of adolescent acting out. Frederick made a mockery out of their precedent.

The Supreme Court very narrowly ruled that Frederick's real offense was the illegal-drug-boosting message, which it found was disruptive to the school's educational mission. A few days later, the court let stand a case from Vermont where a student sued a school over preventing him from wearing a T-shirt with harsh anti-Bush "world domination tour" messages on it. Courts allowed the shirt's political messages, and not its cocaine and marijuana messages. In that case, the student was attacking the president in absentia, but not the principal inside his school.

Students should learn about and revere free speech, but they are still children, and they should submit to adult authority at home and at school. Adults, on the other hand, should revere free speech, but not so much that they end up honoring stupidity as a tribute to liberty. Frederick should have been sent to sit in the corner to wear a "dunce" cap.