Bloomberg, Leader of the Ban 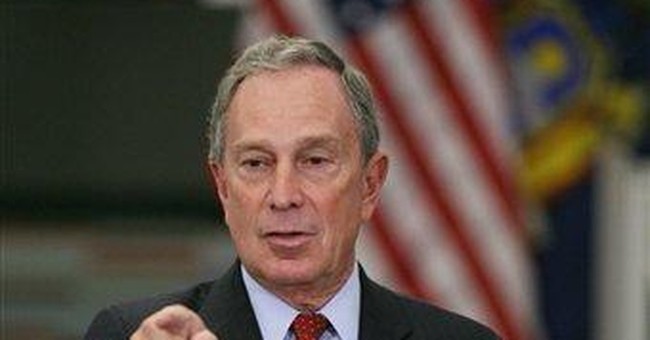 Speculation abounds that he's running for president on the Ross Perot egotistical-billionaire plan, with press reports citing his intention to spend a cool $1 billion of his personal fortune. That will surely create a headwind, but a big part of the wind beneath his wings will be the support he hopes to generate from the national media.

And it's happening already. Bloomberg's third-party spoiler ambitions were heavily promoted by two newsmagazines -- a big cover story in Time with fellow RINO (Republican in name only) Arnold Schwarzenegger titled, "The New Action Heroes," and a two-page editorial by U.S. News & World Report owner Mort Zuckerman titled, "What to Like About Mike."

This is not to say these magazines believe what America really needs is a successful media magnate in the White House. If they did, they would have done the same publicity favors for Steve Forbes. Back in 1996, Time put Forbes on the cover, only to denounce him for being a subversive like Newt Gingrich, "who in 1994 did the most to convince people the government had replaced the Soviets as their mortal enemy." Bloomberg is a hero because he's the polar opposite of libertarian Forbes. He's doing liberal things in New York.

Time's Michael Grunwald cheered that Bloomberg the Action Hero was "talking about saving the planet ... opening a climate summit, highlighting his ambitious plan to slash the Big Apple's carbon emissions." In a time of "partisanship on crack," he hailed Bloomberg for advocating an $8 "congestion fee" on commuters to the Big Apple and "leading a national crackdown on illegal guns, along with America's biggest affordable housing program. He also enacted America's most draconian smoking ban and the first big city trans-fat ban."

If you think autocratic mayors are out of control when they ban things like incandescent light bulbs and trans-fats, just wait until you see what happens when they become president. Bloomberg will probably ban the internal combustion engine.

This isn't the first time that Bloomberg's ban-heavy government style was hailed in Time's pages. None other than CBS anchor Katie Couric offered the same praise in May in Time's Top 100 issue, hailing the moral exemplars that are transforming the world: "He has cut the murder rate, banned smoking and trans-fats in restaurants, centralized the public school system, created a coalition of mayors to keep illegal guns off the streets and developed an extensive plan to make the city more environmentally friendly before the end of his term." In U.S. News, Zuckerman pretended that the liberal mayor governed in a "common-sense, adult, non-ideological manner." (Just the way the "news" magazines like his present the news non-ideologically, I suppose.) Zuckerman hailed Bloomberg because he "bumped taxes" -- a new weasel word -- and "boldly raised" the issue of gun control, or "crime control," as Zuckerman wants us to imagine it. This is "leadership of a high order," he proclaimed. Which is to say: liberal leadership of a high-handed order.

Zuckerman's brazen lobbying for this alleged "moderate" Bloomberg to mount a presidential campaign, which included a speechwriting draft, ended with the thought that Bloomberg's third-party candidacy would set the 2008 campaign "on fire." It would be "ideal" for a third party bid if the primaries typically "squeeze out the moderates."

But ideal for whom? It's hard to imagine that the publishers of Time and U.S. News really think President Bloomberg is a likely historical scenario. Perot drew 19 percent at the apex of his craziness. Committed Republicans and Democrats will stick with their nominees. Among independents and moderates, there is always clear appeal in that "non-ideological" businessman-president model, the no-nonsense deal-maker who will supposedly foil all partisanship and run Washington cleanly, like a corporation.

But Bloomberg won't be that man. America is not going to embrace his socialist agenda. Worse news still: The White House isn't for sale, and if this man intends to spend a billion trying to buy it, the electorate will revolt.

So why are liberals cheering for Bloomberg? Hillary Clinton's negatives are sky-high. A recent Gallup poll put them at 50 percent, meaning she doesn't look like she's going to draw more than 50 percent in a general election. To win, a 1992 repeat would be in order: an independent businessman-billionaire helps a Clinton with high scandal-induced negatives win with just a plurality of the vote.

Ultimately, it is Hillary who is the action hero the media really want to send into the skies to "save the planet" with powerful doses of liberalism.