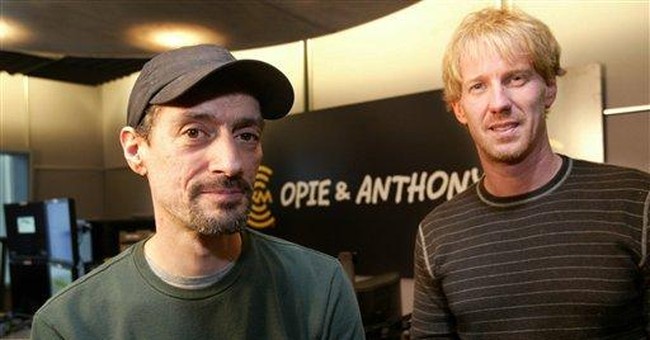 If you thought the radio airwaves would suddenly turn nicer in the wake of the Don Imus firing, think again. The shameless shock jocks Opie and Anthony have succeeded in ramming through whatever wall of post-Imus politeness was constructed with a grotesque routine on XM Satellite Radio that played on -- for laughs -- the idea of raping the secretary of state.

On a satellite-only segment promoted on the Opie and Anthony Website as "uncut, uncensored and totally filthy," this duo laughed as a character named "Homeless Charlie" described how he would like to "(F-word) that (B-word)." The hosts giggled and said, "I just imagine the horror in Condoleezza Rice's face ... as she realizes what's going on ... as you were just holding her down and (F-word) her." They continued to laugh as "Charlie" sickly imagined punching Rice in the face and raping Laura Bush "to death." Opie and Anthony then suggested he add Queen Elizabeth to his list of victims.

Ask yourself this very simple question: How does the Imus "ho" comment match on the horror scale with this rape-and-murder gag?

But that's not how the radio industry sees things, apparently. In response to public outrage, XM suspended Opie and Anthony for a measly 30 days for misusing their "creative freedom." CBS Radio, which fired Imus, continued the shock-jock show uninterrupted, arguing the "uncut" rape segment didn't air on the 24 FM stations that carry the comparatively "clean" show.

The Don Imus team of lawyers will have a field day with the inconsistency in their lawsuit for wrongful termination. But this isn't the only contradiction. CBS Radio was just pressured by Asian advocacy groups to fire the shock jocks "JV and Elvis" after they made a prank call to unsuspecting employees of a Chinese restaurant and berated them with ethnic slurs, with a man in a robotic voice telling an Asian he probably couldn't drive and also telling a woman he would like to "come to your restaurant" to see her naked, especially her "hot, Asian, spicy" rear end.

The jock also attempted to order "flied lice" and repeatedly cursed at several employees. How could they be so stupid, to play this (and, believe it or not, replay this) after seeing how CBS Radio responded to pressure on Imus?

Shock jocks just never know when to shut up. Sadly, the Opie and Anthony rape giggles were not even an unfortunate onetime event. On May 4, a representative from the New York State Lottery said that it would discontinue its commercials on the FM show after a comedian who is a regular guest was heard asking, "Would it be possible, could you whistle 'Singin' in the Rain' while I rape a girl?" Even the makers of Trojan condoms were offended. They pulled their advertising, saying the show did not match their commitment to advancing "sexual health."

And yet some critics of the Imus racial slur aren't as offended by giggling and cheering at the idea of raping the nation's most prominent black woman. Sleaze is sleaze, and the anti-Imus crowd used that show's comparatively highbrow political content against it. And yet everyday shock jocks peddling audio vomit somehow deserve protection out of respect for "freedom of speech."

The Rev. Al Sharpton showed up to debate May 15 on the CNN Headline News program "Showbiz Tonight." But he didn't say a single word against Opie and Anthony or one word in defense of Condi Rice. He insisted that the Imus gaffe was much more offensive! "I think that these cases are different than Imus. Imus was a repeat offender that stood out, in a different situation. ... Imus' situation cannot be compared to other arguments" about free speech, he said.

But even worse than that was his opponent, Debbie Wolf of "People Against Censorship," who bizarrely lectured Sharpton that he needed to "exercise some social responsibility" and stop messing with free speech. She insisted that people like Condi Rice and Laura Bush "need to get a thicker skin." The first lady and secretary of state should giggle along at a skit about them being raped and killed?

Where is the limit for groups like "People Against Censorship"? There is absolutely nothing they can agree is in poor taste. So do they have any taste at all, any shred of politeness? Would they laugh along if the radio pranksters called and insulted their mothers, maybe joked about raping and killing them? Or maybe -- Yuk! Yuk! -- their children? Now that would be funny, wouldn't it?